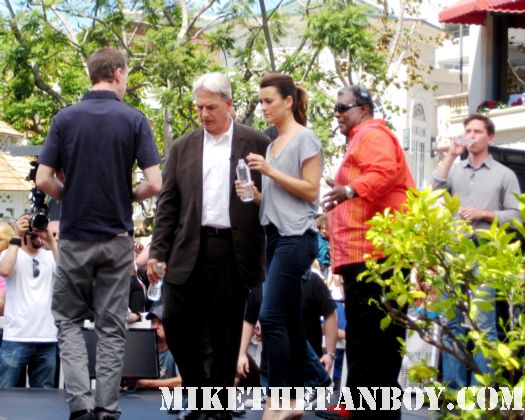 Wow, my sharpie stained fingers just logged on to my email and I got this amazing report from the stunning Anushika! She was out and about on the streets of Los Angeles and ran into… Get this… the entire cast of NCIS! Crazy times! And wait for it… Anushika did a full write up to go with all her photos! It’s like Christmas! Although I don’t see how she could just let Marky Mark Whalberg walk past her, but still…

I’ve been a fan of Everybody Loves Raymond for so long and when I found out that Brad Garrett might show up to the Hoodwinked Too Premiere, I thought it was worth checking out. There are some interesting people in the cast, but knew it would be a pretty small event. I didn’t know what to expect since I’ve never been to a premiere at this location.

09.15am: I managed to get myself up early morning and arrived at the location. There was a stage set up. A bit strange, so I go around and there aren’t any posters or a red carpet, but I saw a table for will-call.

09.30am: Wow! I just realized that the red carpet is inside. Really small premiere, but oh well I’m already here….might as well stick around.

09.40am: I have no idea how this works, but I figured I should stay close to the parking area, and they have a small red carpet set up behind the stage….Now I wait! ^_^

10.15: I see Cheech Marin walking in from the parking lot heading towards the premiere.

10.20: There goes David Grier also heading towards the premiere. I totally forgot about the premiere lol…

10:25: OMG! Mark Wahlberg is walking right pass me, but I’m so focused on NCIS my body refused to go after them lol… 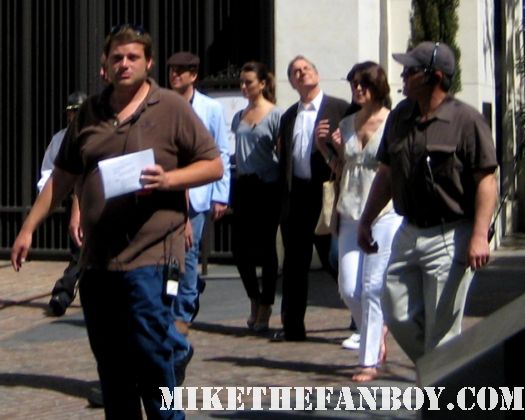 10.35: I see security moving, so I quickly position myself. OH MY GOD!!! I SEE THEM!!!! =D Mark Harmon, Cote de Pablo, Sean Murray, Pauley Perrette, Brian Dietzen, Michael Weatherly and Rocky Carroll, all walking from the parking area together…. I started hearing NCIS theme music. Such a Magical moment!!! ^_^ Even though it happened so quickly, I was seeing everything in slow motion….maybe it was all that waiting in the Sun lol =D 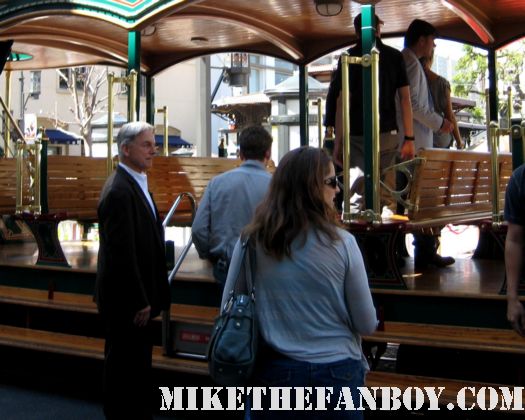 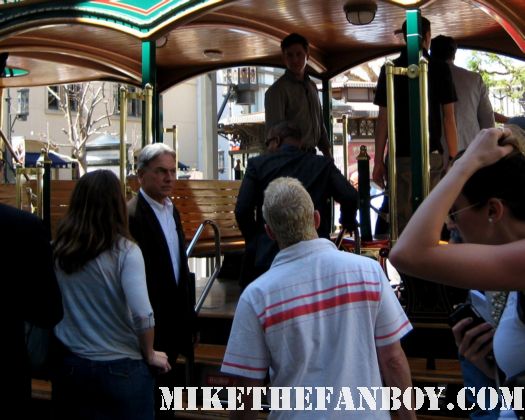 10.45: The crowd started cheering as one by one took the stage, and of course I was flipping out like a mad woman! 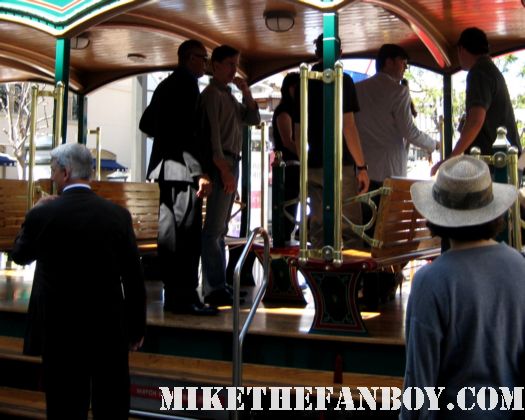 The interview was pretty fun and you could feel the chemistry between all the cast members. Too bad David McCallum was out of town and couldn’t make it. =( NCIS fan, 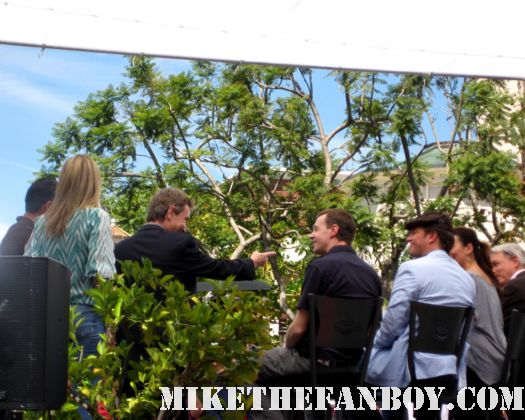 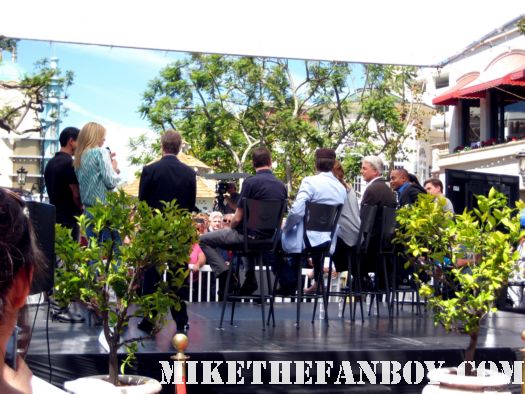 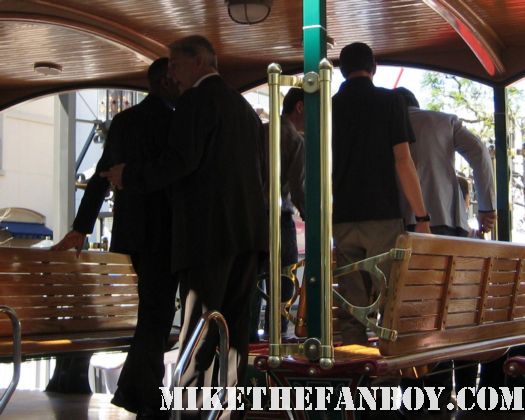 11.35: Looks like they are wrapping up. There are two exits from the stage, and I’m trying to keep an eye on both sides. 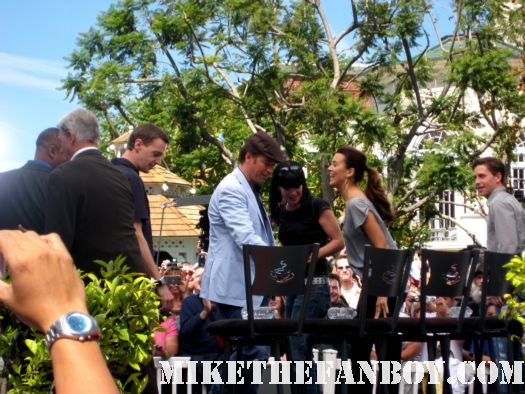 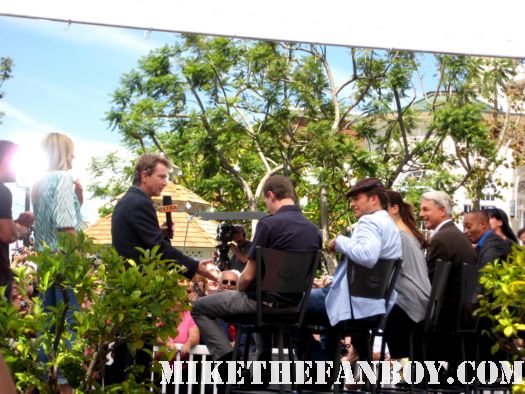 There’s no barricade for fans, so I see pure chaos in the near future. By this time, I saw some familiar friendly faces in the crowd =) 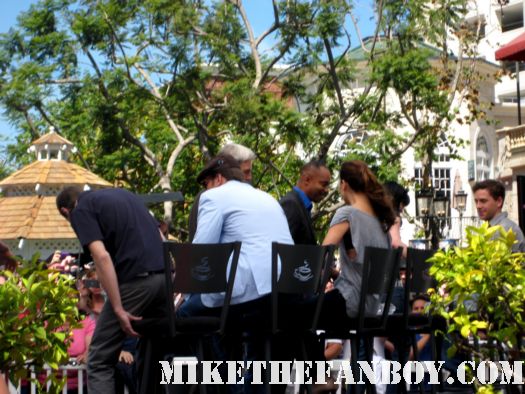 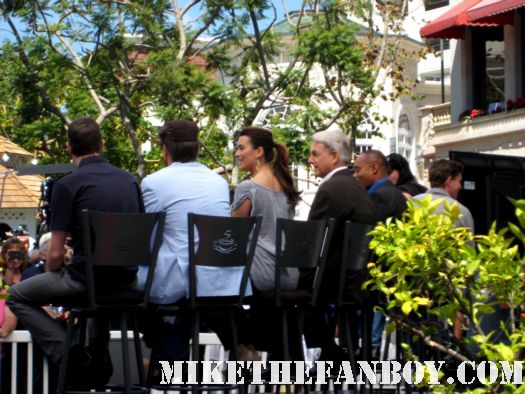 11.40: The cast took some pictures on stage and started to leave the stage. YIKES!!! They are all leaving at the same time. I see Mark Harmon leaving from the side and then I see Cote De Pablo and Michael Weatherly leaving out the other end….had to pick! 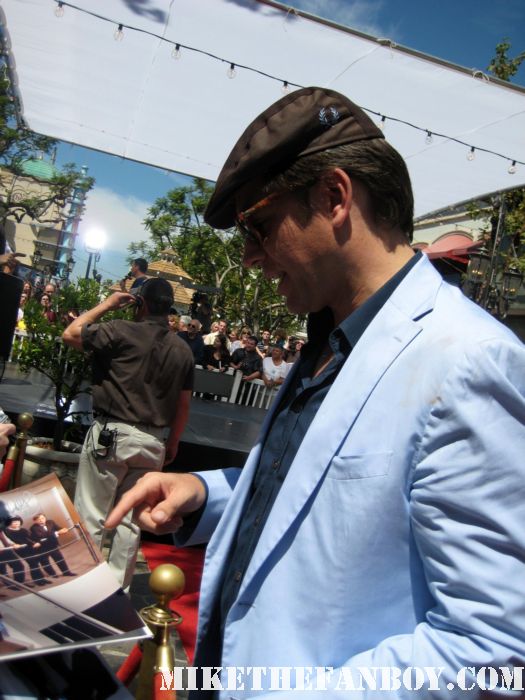 11.45: I call out for Michael, and he started signing next to me. I see Cote De Pablo going pass me and call out for her. She comes straight to me and signs. She is so pretty and sweet. 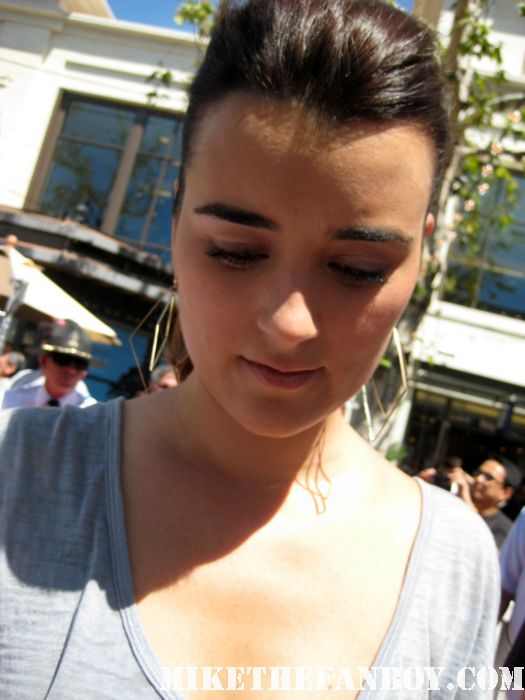 While she is signing, I see Sean Murray walking pass and called him over. He comes right on over to me. Oh No! Cote still has my pen and signing for others. I’m too squeezed in to grab another pen from my bag. Sean Murray realized what happened, so he grabs a pen from someone else and signs my book. 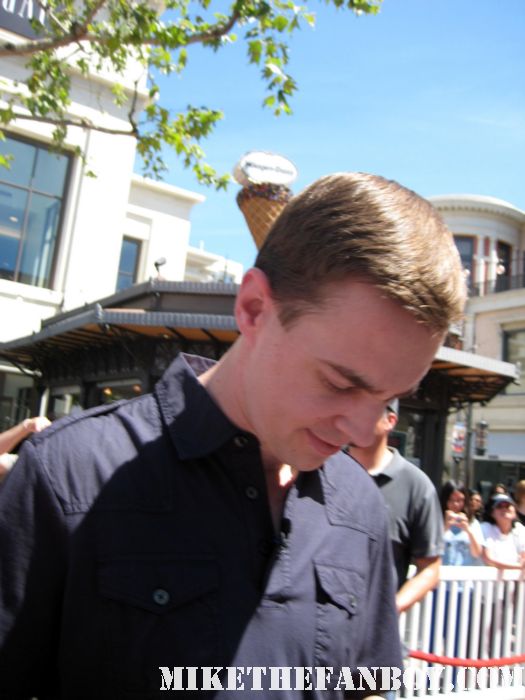 Someone asked him how he lost all his weight, and he looked up and said “No Alcohol” =) He is just adorable! 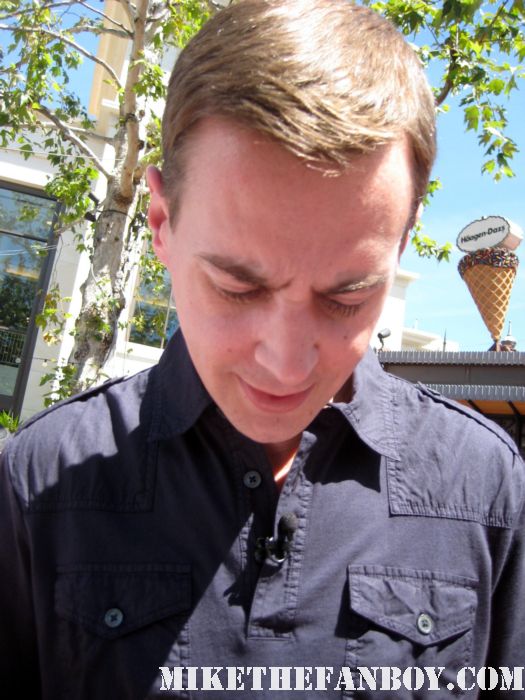 11.50: I get my pen back from Cote de pablo. I’m looking around, but its madness! Lol I spot Brian Dietzen near the parking lot and started running towards him. I asked for an autograph and he says “sure” and signs for me. Really nice guy. Then I asked him if Pauley Perrette is here, and he pointed toward the stage and said “I think she is still stuck over there”. So I run back towards the stage. I feel like a crazy chicken with its head cut off!

11.55: I can’t see much, but then I spot Pauley Perrette’s hair! =) She is trying to make her way out, but trying to sign and take pictures with as many fans while security keeps pulling her away. 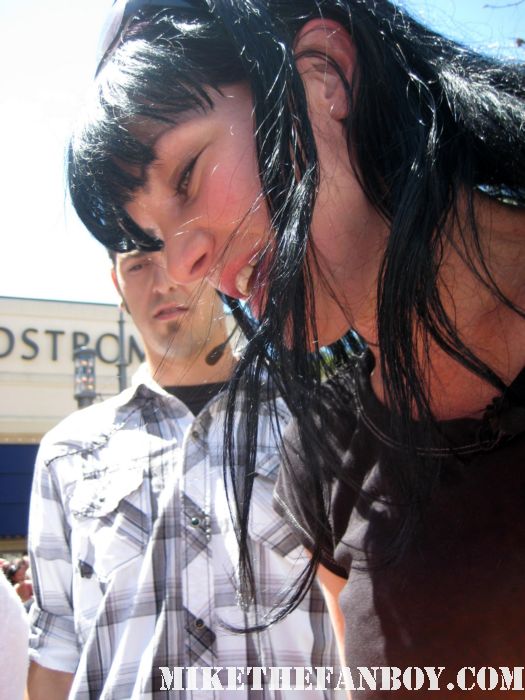 Didn’t look so great for me since I was near the end. A girl just hugged Pauley, and not letting her go! Lol… its sweet and all, but seriously….

11.58: Pauley is near me and her people are trying to take her away saying they need to be at another event. Doesn’t hurt to try, so I rush towards her and actually managed to get my book signed! YEY!!! ^_^ I LOVE Pauley! 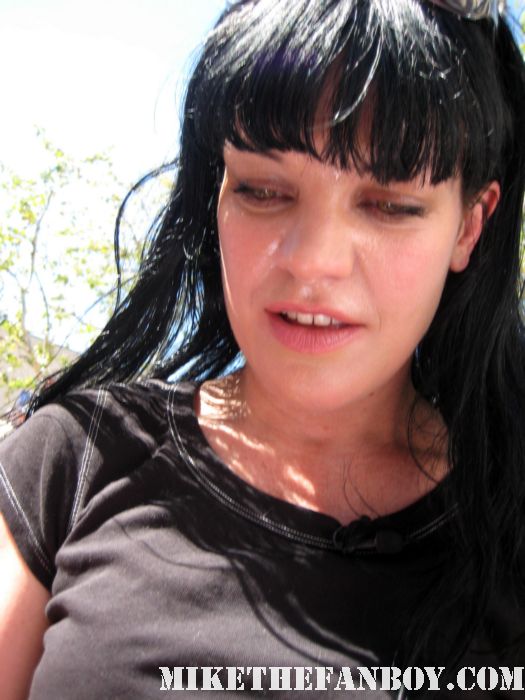 12.00: Now I’m looking for Michael Weatherly, and I see him trying to make his way out through the crowd. Again, they are trying to take him away, but he signs and takes pictures with his fans while getting dragged out. They keep saying “last one, we gotta go”. Again, I try my luck out, and rush towards him and OMG, I don’t know how, but I DID IT!!! He is such an Awesome guy, that he actually tried and managed to complete his autograph while his body was getting dragged lol… 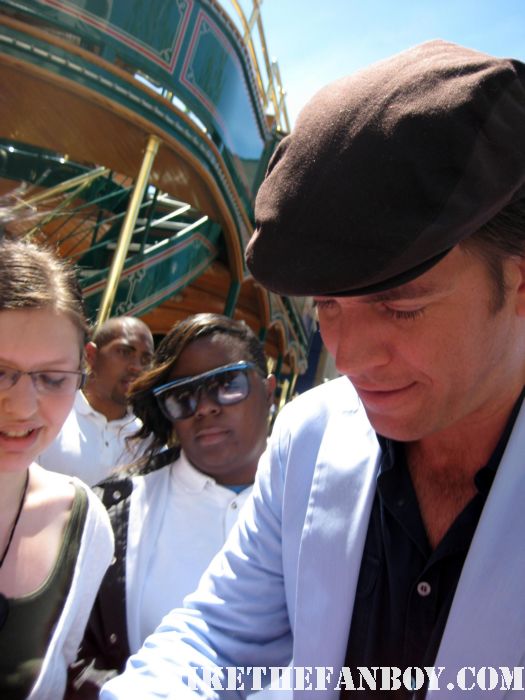 12.04: I look around, and none of the cast is in sight. I’m kind of bummed I couldn’t get Mark Harmon, I mean he is Special Agent Jethro Gibbs for god’s sake!!! I didn’t even see Rocky Carroll leaving, completely missed him. Oh well… I got 5 out of 7, not too shabby! =)

12.05: Since it’s officially done, I head on over to check out the premiere. Nothing much happening, but decided to stick around to see if I could catch anyone leaving. 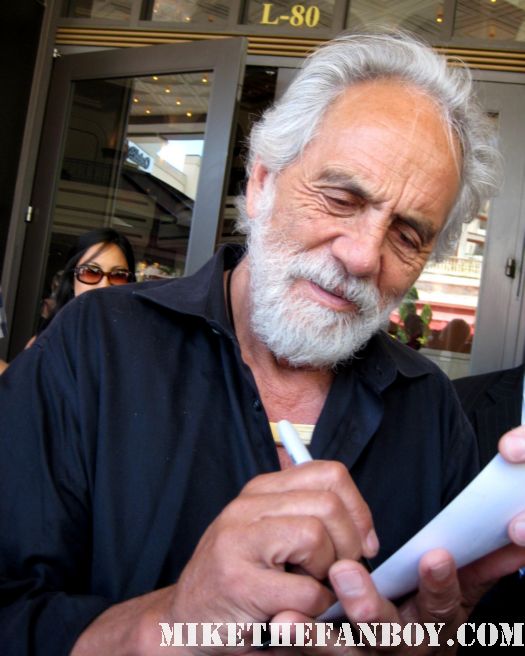 It was such an Amazing Day!!! =D The NCIS Cast was Totally Awesome to their Fans, and I think I Love them even More Now!!!