Flying Lessons and Other Stories edited by Ellen Oh 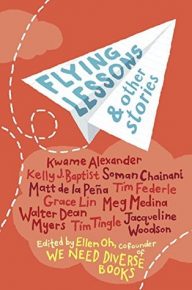 Pitch: So many different voices and unique little gems in this collection of stories by a diverse group of writers!

Story: “Whether it is basketball dreams, family fiascos, first crushes, or new neighborhoods, this bold anthology—written by the best children’s authors—celebrates the uniqueness and universality in all of us.

In a partnership with We Need Diverse Books, industry giants Kwame Alexander, Soman Chainani, Matt de la Peña, Tim Federle, Grace Lin, Meg Medina, Walter Dean Myers, Tim Tingle, and Jacqueline Woodson join newcomer Kelly J. Baptist in a story collection that is as humorous as it is heartfelt. This impressive group of authors has earned among them every major award in children’s publishing and popularity as New York Times bestsellers.

From these distinguished authors come ten distinct and vibrant stories.”

Quick take: Lots of good reading here and it’s not super-heavy or preachy. Some stories focus on the conflict of being marginalized and others give insight to everyday life. Some are serious, some wistful and some comedic. There’s something for everyone here since, well, these writers represent what the world really looks like. These stories are definitely worth the read and so easy to consume in their bite-size portions. This is like a great and satisfying appetizer buffet where you’ll want more and more of these stories from these authors.

Breath of Fire by Amanda Bouchet 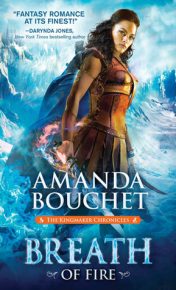 Pitch: The second book in The Kingmaker Chronicles, a sizzling hot fantasy/romance series

Story: “SHE’S DESTINED TO DESTROY THE WORLD…
‘Cat’ Catalia Fisa has been running from her destiny since she could crawl. But now, her newfound loved ones are caught between the shadow of Cat’s tortured past and the threat of her world-shattering future. So what’s a girl to do when she knows it’s her fate to be the harbinger of doom? Everything in her power.

BUT NOT IF SHE CAN HELP IT
Griffin knows Cat is destined to change the world-for the better. As the realms are descending into all-out war, Cat and Griffin must embrace their fate together. Gods willing, they will emerge side-by-side in the heart of their future kingdom…or not at all.”

Quick take: I lover Promise of Fire, the first book in this series, and this one has bigger action, scary new enemies and lots of steamy romance. This series manages the tricky feat of balancing fantasy, action, romance and steamy on an epic scale. Now to wait a year for the final book in the series…

The Bear and the Nightingale by Katherine Arden 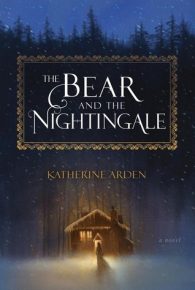 Story: “A magical debut novel for readers of Naomi Novik’s Uprooted, Erin Morgenstern’s The Night Circus, and Neil Gaiman’s myth-rich fantasies, The Bear and the Nightingale spins an irresistible spell as it announces the arrival of a singular talent with a gorgeous voice.

At the edge of the Russian wilderness, winter lasts most of the year and the snowdrifts grow taller than houses. But Vasilisa doesn’t mind—she spends the winter nights huddled around the embers of a fire with her beloved siblings, listening to her nurse’s fairy tales. Above all, she loves the chilling story of Frost, the blue-eyed winter demon, who appears in the frigid night to claim unwary souls. Wise Russians fear him, her nurse says, and honor the spirits of house and yard and forest that protect their homes from evil.

After Vasilisa’s mother dies, her father goes to Moscow and brings home a new wife. Fiercely devout, city-bred, Vasilisa’s new stepmother forbids her family from honoring the household spirits. The family acquiesces, but Vasilisa is frightened, sensing that more hinges upon their rituals than anyone knows.

And indeed, crops begin to fail, evil creatures of the forest creep nearer, and misfortune stalks the village. All the while, Vasilisa’s stepmother grows ever harsher in her determination to groom her rebellious stepdaughter for either marriage or confinement in a convent.

As danger circles, Vasilisa must defy even the people she loves and call on dangerous gifts she has long concealed—this, in order to protect her family from a threat that seems to have stepped from her nurse’s most frightening tales.”

Quick take: This is one of those books that you just sink into. It’s written like a fable with princes, magic forests and children born with a destiny. The result is a spell-binding fairy tale of a free-spirited girl in a very traditional and closed society. (Horse lovers will also love the special attention to those characters.) Gorgeous atmosphere and a very impressive debut. 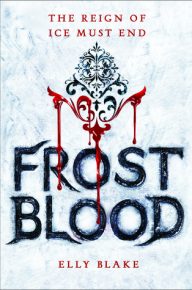 Story: “Seventeen-year-old Ruby is a fireblood who must hide her powers of heat and flame from the cruel frostblood ruling class that wants to destroy all that are left of her kind. So when her mother is killed for protecting her and rebel frostbloods demand her help to kill their rampaging king, she agrees. But Ruby’s powers are unpredictable, and she’s not sure she’s willing to let the rebels and an infuriating (yet irresistible) young man called Arcus use her as their weapon.

All she wants is revenge, but before they can take action, Ruby is captured and forced to take part in the king’s tournaments that pit fireblood prisoners against frostblood champions. Now she has only one chance to destroy the maniacal ruler who has taken everything from her and from the icy young man she has come to love.

Fast-paced and compelling, Frostblood is the first in a page-turning new young adult three-book series about a world where flame and ice are mortal enemies—but together create a power that could change everything.”

Quick take: This is big epic fantasy with lots of layers of history and tons of magic with the future of the land at stake. It’s a page-turner with interesting twists and a huge climax. A great start to a new epic series! 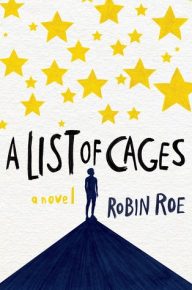 Pitch: Heartbreaking book about a brave kid in a very lonely place

Story: “When Adam Blake lands the best elective ever in his senior year, serving as an aide to the school psychologist, he thinks he’s got it made. Sure, it means a lot of sitting around, which isn’t easy for a guy with ADHD, but he can’t complain, since he gets to spend the period texting all his friends. Then the doctor asks him to track down the troubled freshman who keeps dodging her, and Adam discovers that the boy is Julian–the foster brother he hasn’t seen in five years.

Adam is ecstatic to be reunited. At first, Julian seems like the boy he once knew. He’s still kind hearted. He still writes stories and loves picture books meant for little kids. But as they spend more time together, Adam realizes that Julian is keeping secrets, like where he hides during the middle of the day, and what’s really going on inside his house. Adam is determined to help him, but his involvement could cost both boys their lives.”

Quick take: If you have a heart, this book will break it. There are so many, many tough moments in this difficult story. But this is a beautifully written with an ultimate message of hope and friendship, so, yes, it’s worth a lot of heartache to get to a good place. Just make sure you have tissues ready! 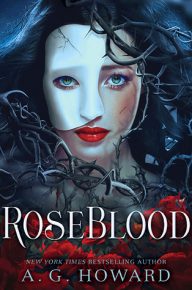 Pitch: Retelling/sequel to Phantom of the Opera

Story: “In this modern day spin on Leroux’s gothic tale of unrequited love turned to madness, seventeen-year-old Rune Germain has a mysterious affliction linked to her operatic talent, and a horrifying mistake she’s trying to hide. Hoping creative direction will help her, Rune’s mother sends her to a French arts conservatory for her senior year, located in an opera house rumored to have ties to The Phantom of the Opera.

At RoseBlood, Rune secretly befriends the masked Thorn—an elusive violinist who not only guides her musical transformation through dreams that seem more real than reality itself, but somehow knows who she is behind her own masks. As the two discover an otherworldly connection and a soul-deep romance blossoms, Thorn’s dark agenda comes to light and he’s forced to make a deadly choice: lead Rune to her destruction, or face the wrath of the phantom who has haunted the opera house for a century, and is the only father he’s ever known.”

Quick take: There’s more gothic horror story than romance in this book which leans towards the pulpy original Gaston Leroux novel. You don’t necessarily need to have read that book, but this assumes you at least know the musical.

The Alchemists of Loom by Elise Kova 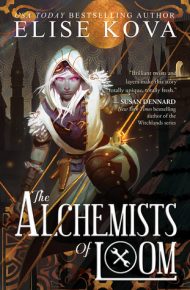 Pitch: The launch of a new epic fantasy series with dragons, thieves and power plays for the throne

Story: “Her vengeance. His vision.

Ari lost everything she once loved when the Five Guilds’ resistance fell to the Dragon King. Now, she uses her unparalleled gift for clockwork machinery in tandem with notoriously unscrupulous morals to contribute to a thriving underground organ market. There isn’t a place on Loom that is secure from the engineer turned thief, and her magical talents are sold to the highest bidder as long as the job defies their Dragon oppressors.

Cvareh would do anything to see his sister usurp the Dragon King and sit on the throne. His family’s house has endured the shame of being the lowest rung in the Dragons’ society for far too long. The Alchemist Guild, down on Loom, may just hold the key to putting his kin in power, if Cvareh can get to them before the Dragon King’s assassins.

He offers her the one thing Ari can’t refuse: A wish of her greatest desire, if she brings him to the Alchemists of Loom.”

Quick take: A fantasy thriller with continuous action set in a complex world with a feisty heroine and a mysterious dragon from the other side of the sky. There’s a lot of world-building at the start of the book so I’d suggest reading the appendix at the back before you start. There’s nothing spoilery back there and it may help you frame the world better.

Thanks to Random House (Flying Lessons and Other Stories, The Bear and the Nightingale), Sourcebooks Casablanca (Breath of Fire), Little, Brown (Frostblood), Hyperion (A List of Cages), Abrams (RoseBlood) and Keymaster Press (The Alchemists of Loom) for providing the books for review. Want more details on my impression of these and other books? Check out my ratings and full reviews at Goodread 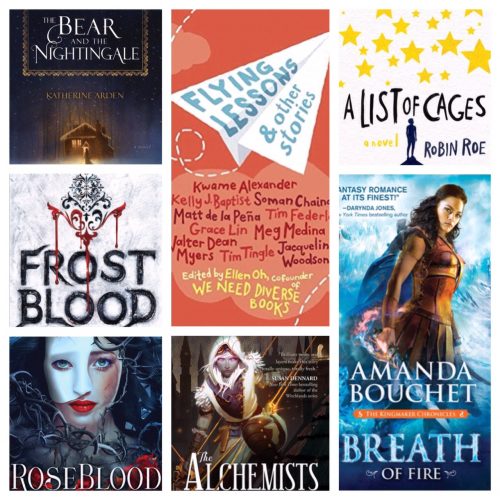