Viva Las Vegas! I headed out to Sin City last weekend for the 2016 RT Booklover’s Convention! With over 600 authors and tons of parties and panels, this was a sure bet for fun!

The RT convention lasts for nearly a week, but if you can’t commit that much time, they have day passes available.  I headed in for just Saturday where the first event was the Giant Book Fair. By “Giant” they mean a 3-hour signing with over 600 authors.  Yeah, it’s huge! 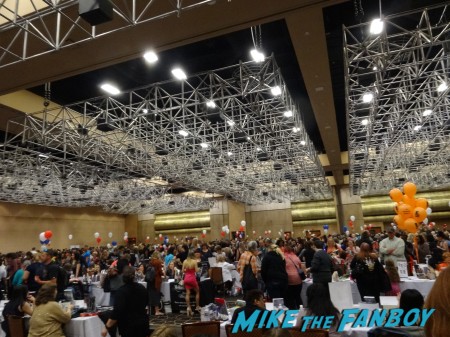 The large ballroom has the authors seated alphabetically in numbered rows with some decent aisle space to form lines for each writer. A couple of the very popular authors are lined along one of the walls where staff will hand out numbered wristbands to keep lines manageable. Very efficient really.

My first stop was totally unexpected. I LOVED Renee Ahdieh’s The Wrath and the Dawn,  a gorgeous retelling of the legend of 1001 Arabian Nights with a hint of magic (one of my favorites from last year).  Its sequel, The Rose and the Dagger is set to release next week so figured I’d find her at another event.  As I walked by her table, I noted that she had a limited stack of early copies of The Rose and the Dagger! Ah!!! While I was kicking myself for not bringing her other book from home, I was delighted to jump into her signing line.  It turns out I jumped in at the right time since I got the last copy of The Rose and the Dagger! She’s just as lovely as her writing! 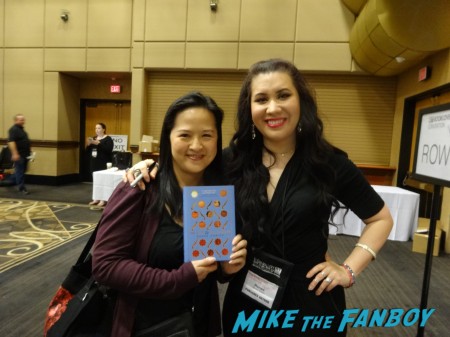 I also caught up with Jodi Meadows, author of The Orphan Queen and its recently published finale, The Mirror King.  For photos, she pulled out a fan-made cloak for the lead character, Wilhelmina, a displaced queen who’s about to take back her kingdom. Yes, it’s huge on me, but that’s not a surprise, right? 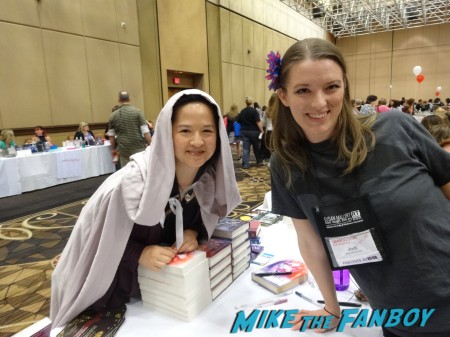 I also met Cindy Pon who writes YA fantasy with real Asian flavor. (Some recent books have featured characters described as Asian, but really, they could have been purple aliens.) Cindy’s Serpentine is inspired by Chinese legends so its a very unique and fascinating read.  It’s sequel, Sacrifice, is out in September and the book after will be a futuristic thriller taking place in Taipei. 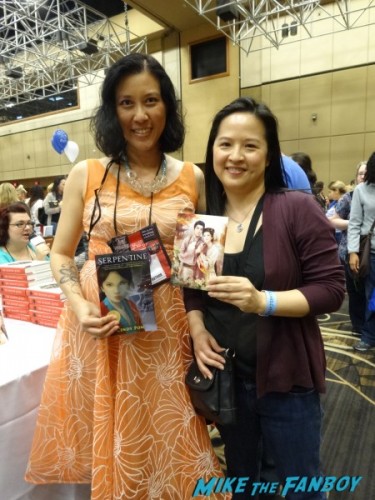 And speaking of diversity, the fierce champions of #WeNeedDiverseBooks, Dhonielle Clayton and Sona Charaipotra were signing copies of Tiny Pretty Things which is all about the mean girl games of the ballet world. There’s a sequel, Shiny Broken Pieces, slated for a July release. 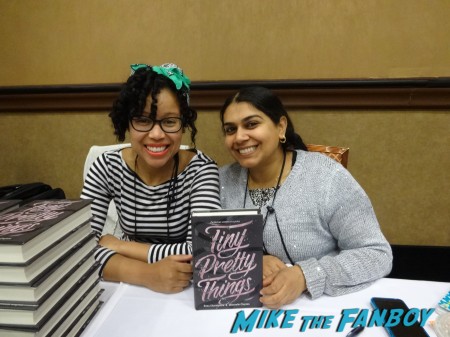 Have you read Forbidden by Kimberly Griffiths Little? It’s historical fantasy set way back in ancient times. Stories in the desert are hot now and this is a great one to add to the list. It’s hypnotic and will totally suck you into this world. The second book, Banished, came out earlier this year and the final book comes out in early 2017. Kimberley was really friendly and had heaps of swag to pass along include bookmarks adorned with lovely little jewels since jewelry is important in the books. 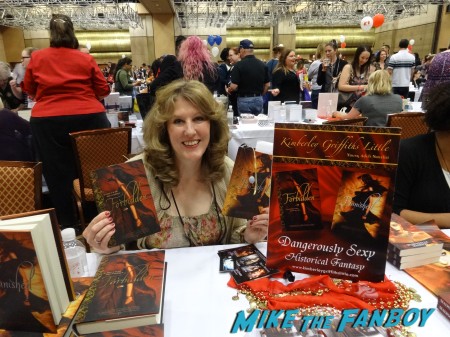 I also got to meet Mary E. Pearson who wrote The Remnant Chronicles. She signed my copy of the first book in the series, Kiss of Deception.  She also mentioned that she’s finalizing her book tour details for the final book in the trilogy, The Beauty of Darkness, and would likely be dropping by Chicago in August. Yeah! 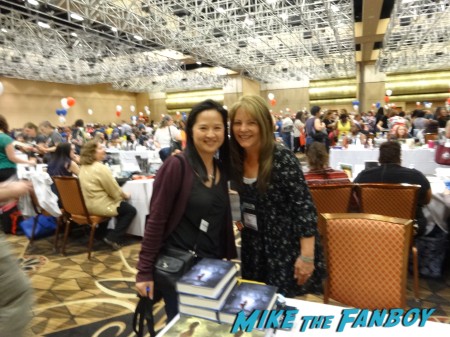 Then I headed over to the VIP signing area where some of the lines had calmed down a bit.  That’s a tip for those going to RT next year: a few authors have crazy lines at the start, but will be much more manageable later. Cora Carmack was really personable and brought tons of swag for readers. 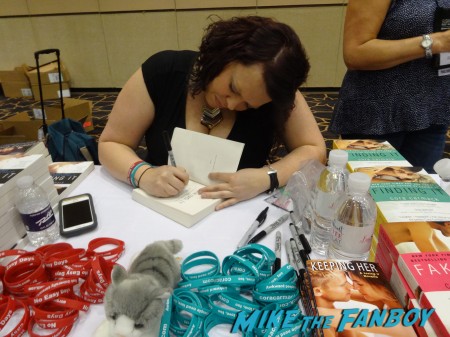 Tamora Pierce, whom 80% of YA writers cite as an inspiration for writing fearless, strong females had a lengthy line most of the day.  Her line moved a bit slowly since she took the time to chat and carefully inscribe each book. 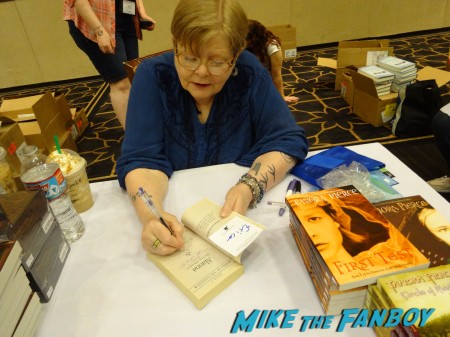 Towards the end of the book fair, by some miracle, there was absolutely no line for Kiera Cass.  I don’t think I’ve ever seen that before!  She was really sweet and happy to sign a few books for me. 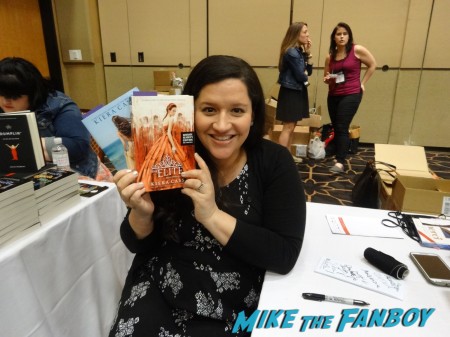 The one author who had a line that never died down was Richelle Mead. Her hands kept busy for three and a half hours, bless her heart! 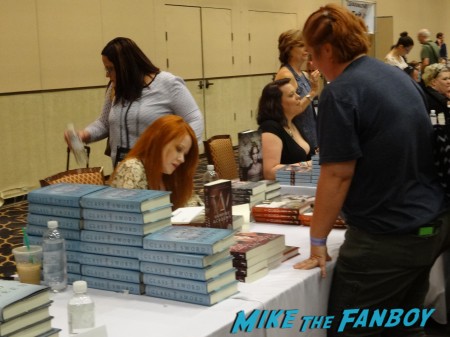 And that pretty much wraps up my Giant Book Fair portion of the day!  I did get a few other books signed, but I kept to a fairly light load since I had to fit everything into a suitcase. RT asks attendees to limit themselves to 10 books at a time and no more than 2 per author. You can purchase books onsite to get a few more signed by an author.  They also have a book check so the people with full-sized suitcases could store them somewhere and make trips back and forth.

Another hint for future attendees: Checking out of the Giant Book Fair can take some time since everyone needs to unpack all their books so staff can verify which books were from home and which were new sales. Books purchased onsite have an invisible stamp on them. (Shout out to my hometown indie bookstore, Anderson’s, which ran the book sales!) Make sure you budget the time if you have an event right after the book fair!

Next off, I met with Alicia and we headed to the Fierce Reads Sugar Rush Party.  There were plenty of sweets on hand… 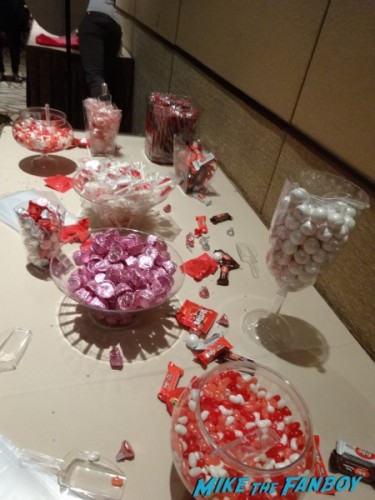 … and also lots of books!  They gave out Fierce Reads cross-body bags which had 3 randomly selected books.  One was a finished book and two were ARCs. I nabbed Nemesis by Anna Banks (fantasy where princess is forced to work with her enemy to break free), Flashfall by Jenny Moyer (dystopian SF/F)and The Winner’s Curse by Marie Rutkoski.  I loved The Winner’s Curse, but I already have a copy so I happily traded it to someone in exchange for The Lovely Reckless by Kami Garcia. Then Swoon Reads had a prize wheel and I happily won a copy of How to Keep Rolling After a Fall by Karole Cozzo (cyber bullying and second chances). Yes!  I am really excited about all of these! 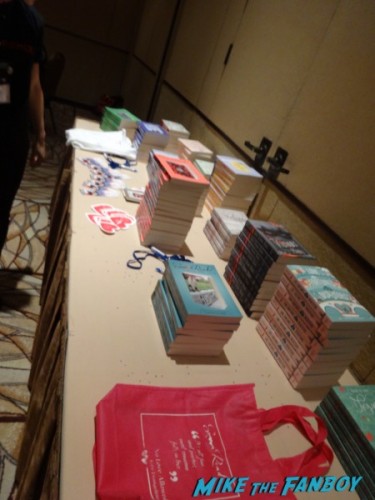 Not only did they have all these goodies, but several authors were on hand to sign our newly acquired treasures (and any others you may have brought from home). Kami Garcia signed my The Lovely Reckless which is pitched as Fast and the Furious/Contemporary YA. With Alicia on hand, we had to, of course, ask Kami about her next book, a story about a teenage Mulder from The X-Files.  Nope, no big secrets here, but the truth is out there! 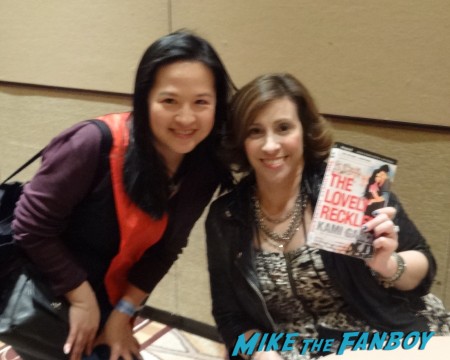 Jenny Moyer was happy to sign and chat with fans.  She had to take a second to check her phone since her husband was wandering around the conference center, a little lost. 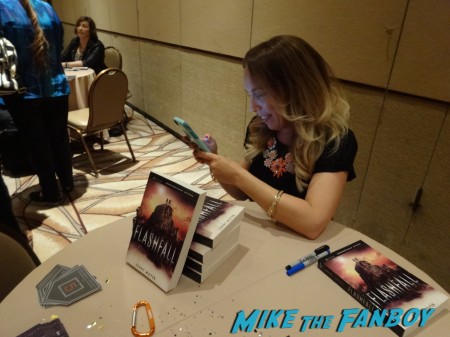 Alicia was getting one of the cute Fierce Reads coloring books signed.  The books featured upcoming covers and author profile pictures for people to color in.  (Mary Pearson was hoping people would give her blue or purple hair!) I got a chance to say a quick hi to Marie Rutkowski who will be part of the Fierce Reads book tour with several other authors. She’ll be stopping by Chicago in a few weeks so I’ll get my books signed then. There’s only so much I can carry at RT! 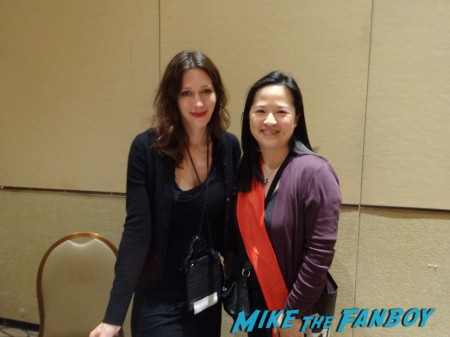 In fact, Alicia and I headed for a quick breather to drop off all our books and lighten the load for the afternoon festivities.  We stopped by the Random House Shop Till You Drop event which had a line up of a lot of up and coming romance authors. I was really excited about the swag bag which had two randomly inserted books and mine included a copy of Emily Griffiths’ First Comes Love.  Score!

After that, we headed to the final event of the day — the RT Teen Day party! There are dozens of tables set up with a pair of authors already seated at the table. Alicia and I were trying to figure out who would be really fun to sit with so we joined Victoria Aveyard and Alexandra Bracken.  And, yes, these ladies were smart and a lot of fun!

The party kicked off with some trivia which was answered as a team. It really didn’t matter about the score since this was just for fun. 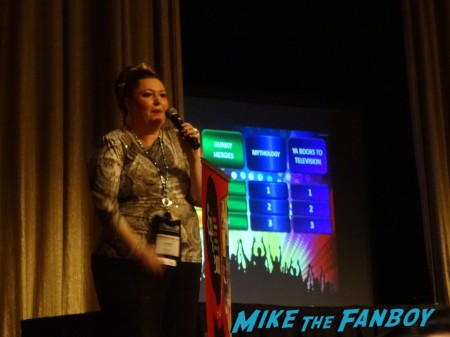 The host would randomly call on one of the authors to pick out the next trivia question. (See Alex below.) 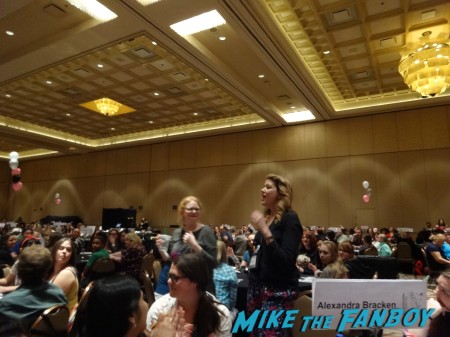 When we finished with trivia, all the authors gathered for one GIANT yearbook photo which I had to do it two parts: 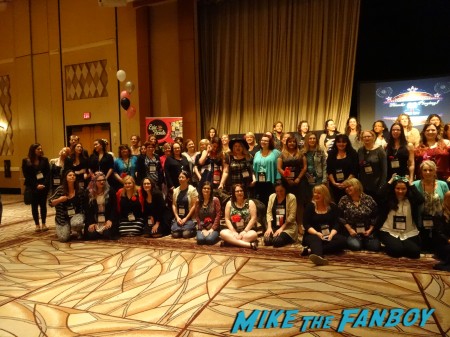 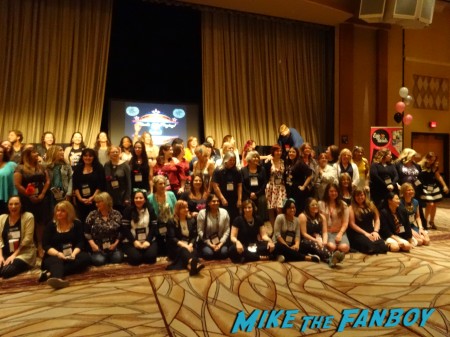 Pretty amazing talent in one room!

After that, it was swag time!  The hosts randomly selected tables so attendees could grab a tote bag (filled with swag, several ARCs, a finished book and an extended sample of The Glittering Court) and a trip to the goody room where each person could select an additional two titles. There was a huge selection of titles across a number of publishers and there were some really hot titles!

At first, they let only the teens go in and then the adults could go afterwards.  Kind of strange since, as Victoria Aveyard commented, half of YA readers are adults.  Whatever. We eventually made our way in  and selected our prizes.  Since my tote bag had a book I’ve already read, I traded it for one of the ARCs I really wanted to hunt down — My Lady Jane by Brodi Ashton, Cynthia Hand and Jodi Meadows! It’s a re-written history of Lady Jane Grey “in the style Princess Bride.” Must read!

Some of the authors were hanging about and were happy to sign some of the newly acquired books. Richelle Mead instantly had a line forming since everyone had The Glittering Court extended samplers.  She graciously started signing and soon a line formed. I wonder if they had to ice down her hand that night!

There were so many leftover swag bags and books that they let everyone grab a second swag bag and teens could go back to the goody room and grab as many books as they could carry. Epic hauls!!

This was my first RT convention and it was a lot of fun. I enjoyed meeting the authors and getting a genuine moment with all of them.  As crazy as the events are, they were all very personable.

I also acquired so many books on my want list! All the books were on my radar, but I’m particularly excited about My Lady Jane, The Lovely Reckless, First Comes Love, Nemesis, The Crown’s Game (in the spiffy purple bag), Of Fire and Stars and Bright Smoke, Cold Fire. I walked away with more books than I anticipated so I had to ship a box home. I got to hold these beauties for about an hour before I had to box them up. Sadness. I can’t wait for that box to arrive! 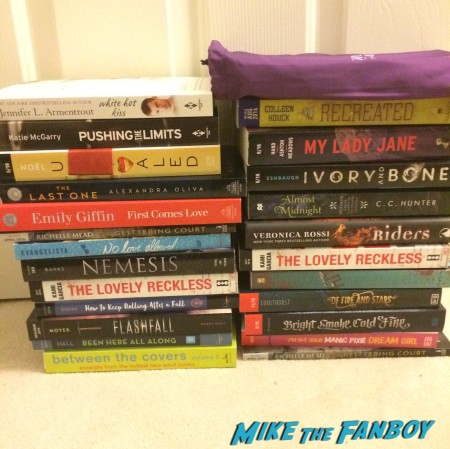 Careful eyes might notice I have a few duplicates in my pile.  Yes, I plan on holding some more giveaways so stick around!

Also, I had loads of fun hanging with Alicia for the day! Look for her write up of this event since she attended more days, was a part of a panel and attended one of the big parties!

Next up: YallWest at the end of next week!  I can’t wait!