Natalie C Anderson made her YA debut this year with City of Saints and Thieves, a terrific mystery/thriller about a young girl on a quest to avenge her mother’s killer. I had a chance to catch up with Natalie on her inspiration and her take on refugees during the Oak Park, IL stop of the Penguin Teen spring tour. 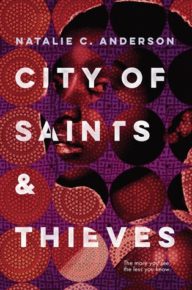 Natalie describes City of Saints and Thieves as: “a murder mystery set in Kenya. The main character, Tina, is on a quest for revenge. She thinks she knows who killed her mother and so she sets out to ruin him and steal all his money. Of course things go horribly wrong.”

Tina has been living on the streets for years and she falls into a gang of thieves who finally give her the opportunity for revenge. She’s caught by the rich businessman’s son, her former best friend, who offers to help her because he wants to clear his father’s name. Now she’s trying to find the truth, handle the demands from the gang of thieves and her former best friend.

There are lots of twists and turns in this mystery/thriller that take Tina back to Congo, her home country that she left as a refugee. Tina’s refugee status was actually Natalie’s inspiration for this book.

“I spent about three years living in Kenya and working with refugees,” she explains. “I was interviewing refugees from all over the continent who were being considered for re-settlement to the US. I was doing four interviews a day, six days a week for three years. I collected all these stories. The purpose was to get them settled, but I heard so many incredible stories. They were very dark so it took me a long time to process. Then I had this idea for a story with a Robin Hood-type girl who was a refugee and who was surviving on the streets alone and super tough.”

City of Saints and Thieves is a mystery/thriller with such a richly developed setting that it’s another key character in the book. Natalie admits that “I have my hidden agenda of hoping that [readers] will understand refugee situations a bit more. It’s a huge issue these days. But I don’t want people to feel sorry for refugees I want people to feel that these are real people who have real stories who have been through incredible things, but they are so much more than what’s happened to them. They want to be known for different things that just a refugee.”

Given her extensive work in vetting refugees and all the recent conversation around refugees, she thinks that most people “assume that refugees are desperate to get into the US or Europe. They don’t understand that people are forced out of their homes and they don’t have any other choice. There’s a mental leap you have to get over if you’re looking at someone who’s coming into your country and you’re seeing them just as someone who can take jobs or be on welfare. It’s hard for some people to appreciate the fact that those people don’t want be there on your doorstep. They would rather be in their homes where they grew up. They’ve been forced out of them. It’s not like ‘refugees go home.’ They can’t. I think that’s one thing people are often surprised by: It’s not a choice. It’s something that people have to do to survive.” 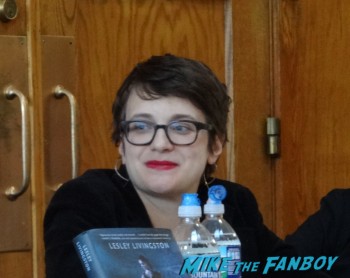 Despite these huge and dark themes, City of Saints and Thieves is an entertaining thriller. Natalie reveals that “I wrote this story because I wanted it to be something entertaining. Personally it’s about the issues that I think are important and I want to write about. I don’t want to read a book that makes me just depressed and feel like the world is on fire (even if it is).”

This is such a compelling story, that Kerry Washington (Scandal) has optioned the film rights. While it’s rare for authors to have a lot of say in the movie version of their books, Natalie has an idea of the sort of vibe she’s hoping for: “I loved Beasts of No Nation. I think they did a really good job with the story and it’s such a beautiful book. Its’ a very dark book. I like that story a lot, but I would want something where the treatment is a little more pop-y, where it has a little more excitement to it. More of a James Bond kind of feel.”

Meanwhile, Natalie is hard at work on another story, set in the same city fictional city in Kenya. City of Saints and Thieves is a standalone book so her next story is about a Somali refugee boy. She gave a quick preview of the story: “His family gets kidnapped by this shady CIA-type guy who forces him to infiltrate a terrorist organization and feed the CIA-guy information in order to get his family back. He’s got to be a spy within this organization. It’s told in now and then – flashes back and forth. It’s pretty different. It’s a little bit darker. I hope it’ll be out there soon.”

Until then, make sure you read City of Saints and Thieves! Natalie is on a book tour with the rest of the wonderful ladies on the Penguin Teen tour. It’s amazing author line up with terrific books that all have kick-ass heroines: Alwyn Hamilton’s Traitor to the Throne, Renee Ahdieh’s The Rose and the Dagger (I can’t wait for her new book, The Flame in the Mist in May!!) and Lesley Livingston’s The Valiant.  Make sure you check out the tour or check in with the book stores to see if they have extra signed books available. 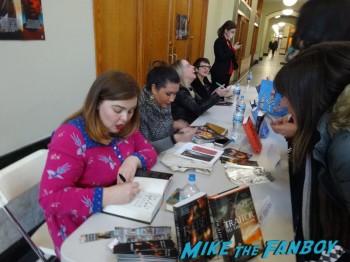