Home / Movie Reviews • Reviews / Carrie Blu-Ray Review! You Will Know Her Name! How Does The Remake Stack Up Against The Original?

You Will Know Her Name!

As the tag line for the new remake of the classic Stephen King novel Carrie, it couldn’t be more accurate. For everyone who encounters Carrie in this version, remembers her.

High School is never easy and that’s never been more evident than now. Carrie (Chloë Grace Moretz) is THAT girl. More than an outsider, this Carrie is an alien in a strange world. Home Schooled for years and finally forced by the state to be put into public education, Carrie is the ostracized weirdo that no one eats lunch with or talks to. 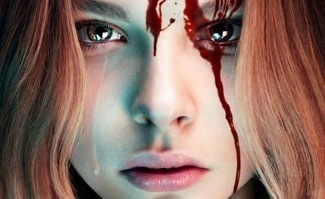 When she gets her period in the girls locker room, she doesn’t know what to make of it. She has never been told about the birds and bees and loses her mind. She is taunted by the girls yelling, “plug it up” and is video taped being harassed. Carrie’s mother Margaret (Julianne Moore) is deeply disturbed and has tried to prevent her daughter from growing up and hence infected by the devil. Margaret takes her daughter from school, while the incident dies down.

The school puts the disciplinary job on gym teacher, Ms. Desjardin (Judy Greer). She forces the girls to run laps and the two ringleaders of the incident have opposite reactions, Sue Snell (Gabriella Wilde) starts to see how horrible the incident was, while school bully Chris Hargensen (Portia Doubleday) gets more fueled by hated towards Carrie. Chis gets banned from prom for being insolent and none of her friends rally to her aid. 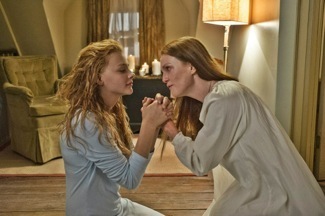 With the advent of her growing womanhood, come some more interesting changes for Carrie, including figuring out that she can move things with her mind. While at first this scares Carrie, it also empowers this former wallflower. She researches the subject and learns to channel her ability more and more. By the time she goes to prom by Tommy Ross (Ansel Elgort), Carrie has already used her newfound powers to subdue her mother and free herself from her grasp.

At the prom… Well… We all know what happens at the prom, there is blood, car crashes, and madness with a whole barrage of bodies left in the wake.

It’s impossible to judge this version of Carrie on it’s own. The comparisons to the Brian DePalma original are unavoidable. The original, being one of my favorite films, is a cinematic classic. This Carrie… While it’s certainly not on that level it does hold it’s own due to two strong lead performances. 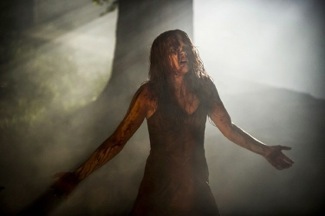 Julianne Moore as Margaret White is way more menacing than her big screen counterpoint, Piper Laurie. She takes her religious fanaticism to a whole new level, adding blood letting and cutting to emphasize her point… Literally. Julianne Moore makes the perfect villain and is easily someone that the audience can pin their hatred on. 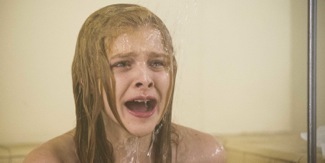 The image quality is quite good and the colors pop off the screen. The prom climax scene is excellent and there are so many details that are apparent, it’s really hard to take them all in. 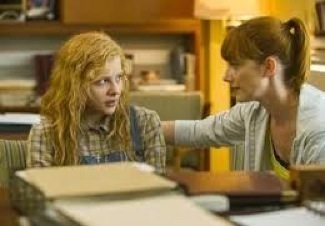 The blu-ray is loaded with special features. The director’s commentary track with Kimberly Pierce is good, it doesn’t really reveal any new information about the film but there some nice tidbits that wouldn’t have been talked about otherwise.

There is an alternate ending deemed too shocking for theaters, however I wouldn’t put that label on it. You can see why it was cut, but it’s always interesting to see things like this because it gives more insight into the filmmaking process. 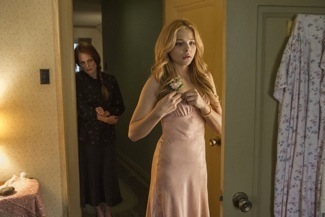 There are about 9 deleted scenes, most are longer versions of scenes still in the film, the featurettes include Tina on Fire Stunt Double Dailies, which was fun because this specific sequence was done with real fire and not CGI. 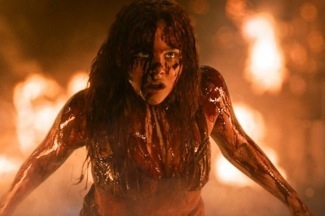 Other featurettes include Creating Carrie, The Power of Telekinesis, and my favorite Telekinetic Coffee Shop Surprise which is a hidden camera trick played on unsuspecting victims.

Overall, while it probably won’t stand the test of time like the original, the remake of Carrie was still quite enjoyable, the performances top notch, and special effects excellent. It’s definitely worth a spin for any horror lover out there!

Carrie is out now on blu-ray! 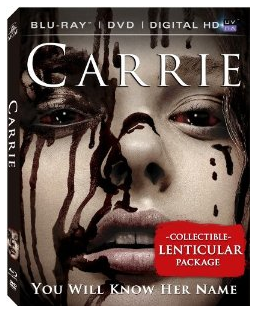