Okay, we all know Comet TV is awesome… I mean, if you haven’t checked them out yet… Like… What ARE you waiting for?

This month, there’s an amazing Godzilla marathon and Comet TV is giving fans the chance to win a Godzilla of their own!

You can win the Godzilla Doin’ Work Limited Edition prize pack. It has:

1 – Limited Edition Godzilla Action Figure: Who doesn’t want to sport some COMET TV swag! Godzilla sure does! He loves COMET TV so much, he’s ripping through his shirt, clearly Godzilla has been hitting the gym! 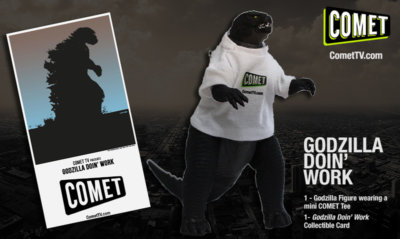 I’ll tell ya how to win, but first, let’s look at some of the goodness that Comet TV has in store!

GODZILLA IS DOIN’ WORK ON COMET TV IN SEPTEMBER

GODZILLA: FINAL WARS (2005)
Godzilla: Final Wars takes us to the 28th century where Earth has been ravaged by giant monsters, giving the Xiliens (a group of aliens who dress like they’re in a 90’s goth rock band) a chance to claim our planet as their own.

Godzilla 2000 (1999)
GODZILLA WEARS A TINFOIL HAT. Did you know Godzilla is a UFO believer? Unfortunately, years upon years of reading about alien abduction conspiracies on the internet can’t prepare the King of Monsters for what happens in Godzilla 2000….When a UFO is awoken from a million-year slumber deep in the Earth’s crust, it employs a series of sneaky tactics (gene-snatching, reckless driving, and more) to give Godzilla a real extraterrestrial beat-down.