This was one of the best moments at SDCC for me! It was the Vikings Longboat cruise through San Diego!

Comic Con was a whirlwind and like every year so much happened that is so hard to process. The best thing that I was able to do however, was attend the Vikings sunset cruise onboard the special Vikings LongShip.

The ship was ready to set said Friday evening and was adorned with severed heads and looked incredible. 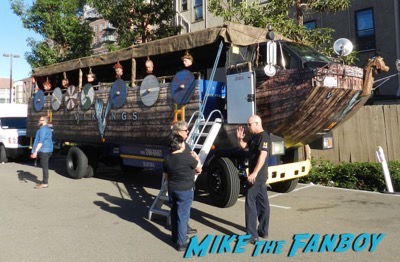 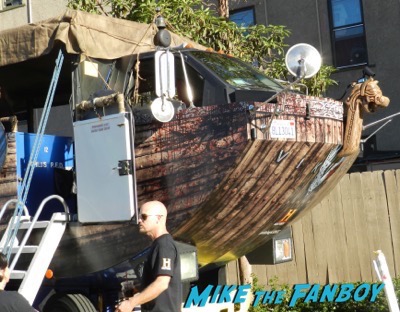 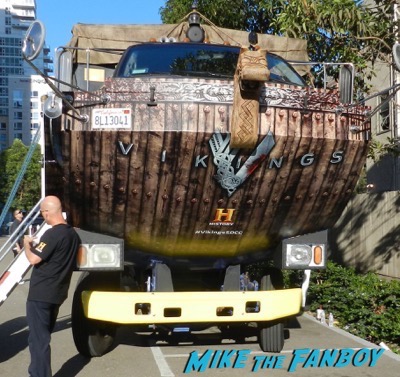 The passengers were joined by the cast of Vikings Travis Fimmel, Clive Standen, Katheryn Winnick, and Alexander Ludwig.

What could be better on the Friday night of Comic Con than hanging with the cast of your favorite show?

In fact out of the 15 or so years I’ve been heading to San Diego Comic Con, I’m going to say that this was the best thing I’ve ever had the pleasure of doing. 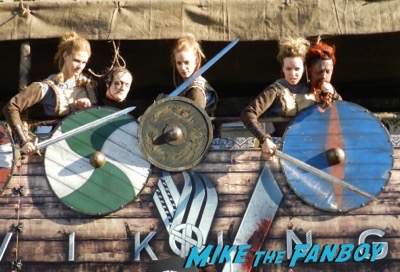 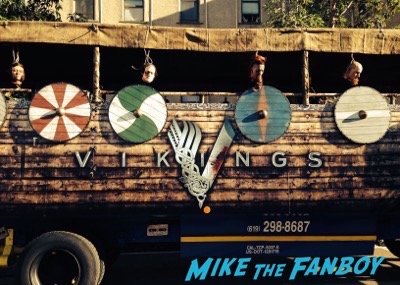 The cast posed for photos in front of the Longship as everyone prepared to board for the journey ahead. 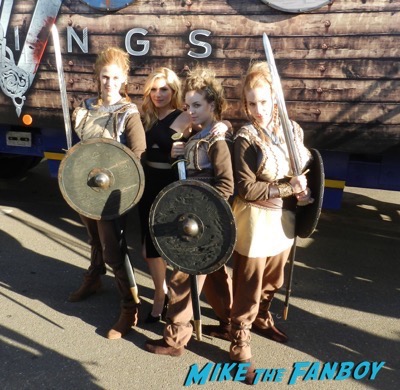 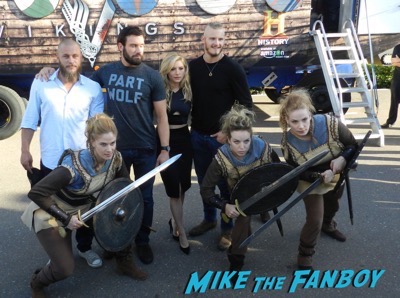 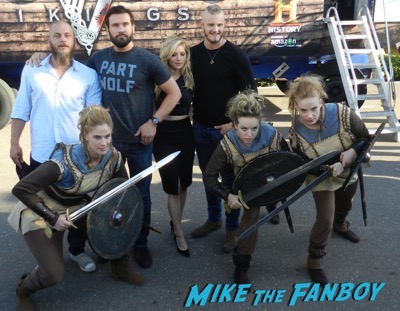 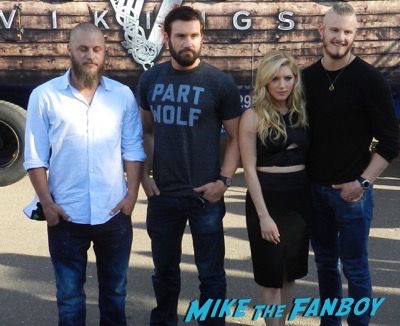 The crowds of people downtown stopped to stare and cheer as the boat tore through the streets of downtown.

As we traveled I was fortunate to talk to the man, the myth, the legend, Mr. Clive Standen. Clive, AKA Rollo had a killer year during season three of Vikings. Rollo went through many changes which led up to the shocking season three finale.

Of course talked to what’s next for the character and what we can expect in season four.

“In season four you’re going to be shocked.” Clive said, “You’re going to see a lot more of the ‘sweet’ Rollo. He’s almost a thinking man, and he’s starting to realize that… it’s great that he’s been given a little power and responsibility. It’s like children, you run with it. They feel like the boundaries are broken. You’ll see a grounded Rollo, a sensible Rollo.” 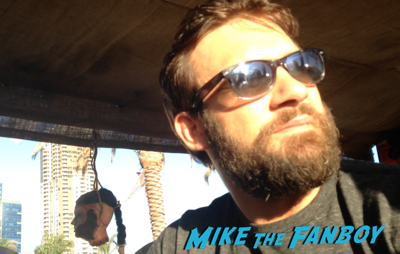 At the end of the third season Rollo is set to be wed to the princess, which I know based on several emails I got that viewers were shocked Rollo could betray his family again.

“He does the deal, he gets the princess and he thinks, this is going to be easy, it’s going to be great. But then he realizes that he’s going into a city where everyone hates the Vikings, they all hate him, they’re not going to accept him easily. And this princess says, she would rather vomit than go anywhere near him and he can’t speak the language, that’s Rollo”

Looking ahead to season 4, what are the challenges facing Rollo and how will Rollo change and adapt.

“Ragnar learns to speak Anglo-Saxon right from the beginning, he has Athelstan, and he makes an effort. Rollo is a pig headed, old fashioned neanderthal man, who just thinks ‘I’ll get by, by smashing in the door’ he realizes that he has such a massive mountain to climb if he’s going to pull this off because he can’t walk away now, he walks back and…”

And how will Rollo fit in to his new surroundings?

“You see him walk into Notre Dame, when the princess is there and you see everyone is terrified of him, that’s what’s interesting to me because he can’t speak the language, who does he go to? Who does he ask? He doesn’t have an Athelstan, they all hate him. Who’s going to be the guy who takes him to the side and shows him all that?” 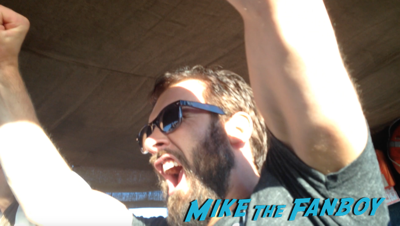 After the boat made it to the San Diego bay we sailed on the water, popped open some beer and looking out over the view, it’s amazing that this is the same San Diego with the hustle and bustle of Comic Con.

It was so serene. 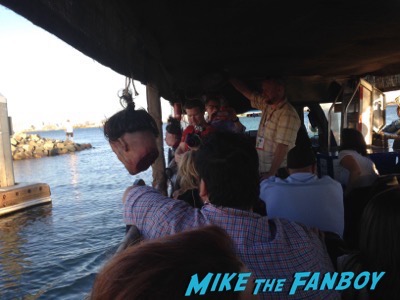 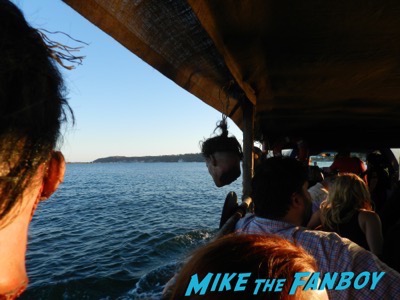 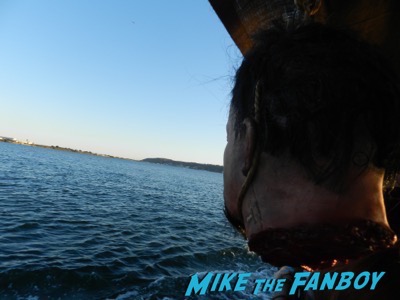 Alexander Ludwig came over to us next and we had a great time walking about season 4 and what’s to come for Bjorn.

The season four teaser, which was released at the end of season 3 showed Bjorn about to fight a bear.

“We shot that in Sault Ste. Marie, which was in the middle of nowhere in Ontario. It was such a blast. It was just me, the crew and the bear in the freezing cold. I’m really happy we did it. We were able to take snow mobiles there. I think the show needed that, I think to show the wintery aspect.” 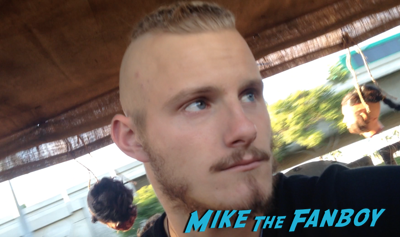 At the end of season 4 there were lots of questions left unanswered. There was a buildup with England and then everyone went to Paris.

“All of that gets resolved this season. It’s not forgotten about, I thought that was a ballsy move, a lot of fans were like, ‘what the hell happened?’ That’s all resolved in season 4.”

Speaking of season 4, what’s ahead and what can fans look forward to? 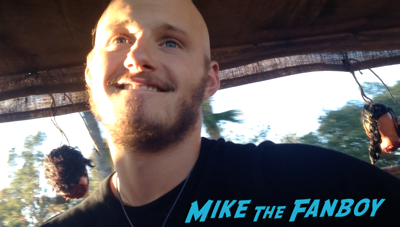 Vikings is based on actual historical events, so how much do the actors want to know and how much should they know?

“It’s our job, and we’re not doing it properly if we’re not researching. Gustaf and I took a trip to Iceland, and we went there and met up with this old Nordic writer who is friend’s of Michael’s. We came back so inspired.”

The thing that has always struck me about Bjorn and Alex’s portrayal of Bjorn in particular is how he was raised with Lagertha and how different he is from the “standard” Viking.

“At an early age, Bjorn had to look out for his mother and she had to look out for him. So, he has that heart to him. That’s something we really address this season as well. Ragnar talks about the four pivotal years in childhood that happens with a father and son. This is why Bjorn goes to the wilderness by himself, because he’s like… ‘you’re right, I have to go, I need to leave, I need to find out who I am. I have to prove to myself that I can do it.” 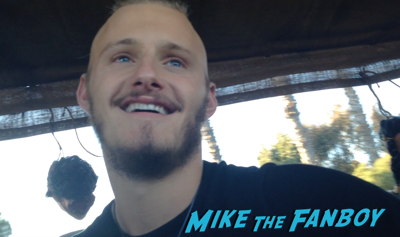 When you talk about fanbases, it’s hard to think of a show that has grown more steadily than Vikings.

“Comic Con is one thing, you go to Iceland or Sweden or like any of the Nordic places, I’ve never seen anything like it. You can’t walk down the street. People will jump out of their cars, it’s nuts. It’s been amazing being a part of something that’s not a franchise and seeing it grow.” 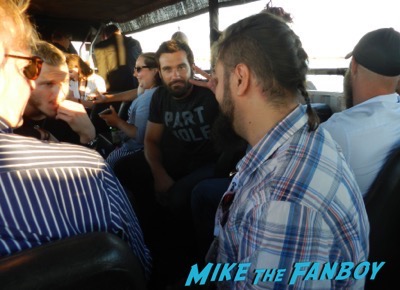 Sadly, there wasn’t much time to chat with Katherine Winnick or Travis Fimmel. I did get to say hi to Katherine before the boat ride, well… She said, “Hi Mike” and I think I might have melted but that’s a story for another time. 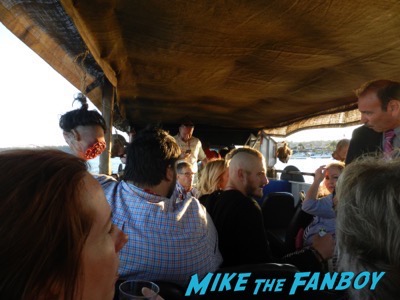 The boat ride was literally one of the most amazing experiences of my life. I wish it would have lasted another five hours. 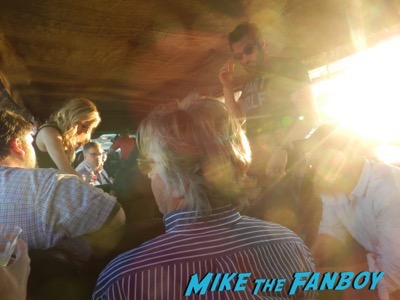 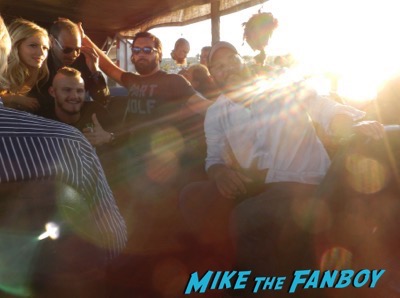 Special thanks to History for inviting me along for the ride and thanks to the cast and crew of Vikings for being one of the coolest and most open casts around, but mainly for creating such an awe inspiring series. 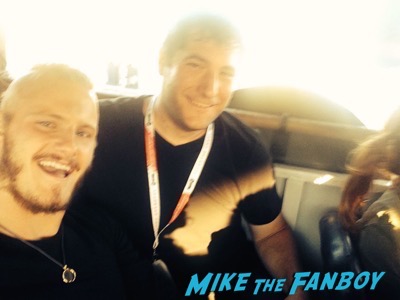