Good morning U.S.A., I’ve got a feeling that it’s going to be a wonderful day!

It certainly is, especially when you have the opportunity to interview the cast of American Dad, who celebrated their 200th episode, “The Two Hundred,” which aired March 28th on TBS.

I first sat down with co-creator and show runner Matt Weitzman and Dee Bradley Baker who plays Klaus, the German goldfish. No matter what Dee says in that accent, which he did often during the interview, it makes you laugh. I asked Matt if the writers room ever came up with a joke that even they decided was too offensive. He recounted a story that they once wanted to have Patrick Stewart’s character, CIA director Brooks, say he has a “thing” for little children and it was Patrick that would not allow his character to say such a thing. Dee followed up by asking Matt if it was personal for Patrick or if he felt the character would never something like that. Matt clarified that, yes it was a personal choice from Patrick. 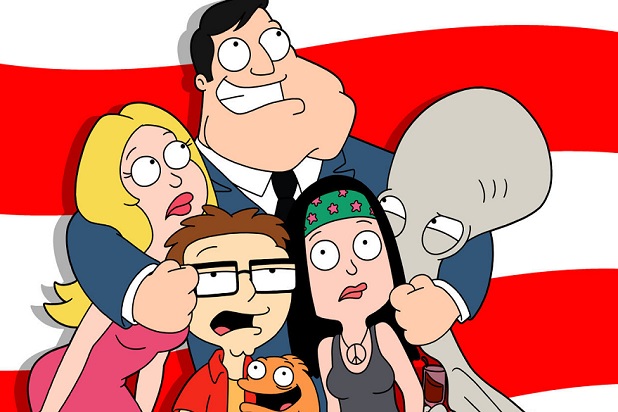 Matt said they do have always try to push the line but know when not to cross it. Since their switch from Fox to TBS in the fall of 2014, the new network does allow them to do a little bit more, but “they all monitor themselves some”. Matt spoke of the freedom with an animated series and that in 11 years of the show they have had several logic jumps come up. For instance, Roger was never intended to leave the house, but “then we discovered putting him in a wig and giving him a little bit of an accent and suddenly the world doesn’t recognize he’s an alien or notice he has no nose”. Dee clarified that “it’s great how they don’t have to pay attention to logic” like on a regular show and “you can’t know that stuff ahead of time” and Matt confirmed that, “no you can’t” and that they just have to try things and see what direction it goes. 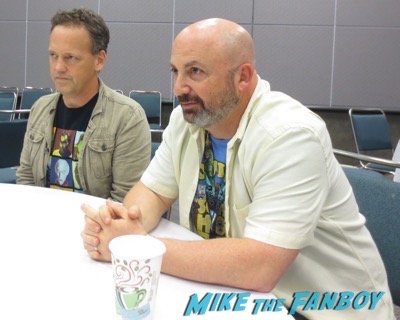 When asked why the show has remained so successful for so long, Dee said it was that the show is ultimately about family. “That’s the part why people come back to watch. It all comes back to family”. Matt added that “the goal is to show, we’re all in this together. You want the audience to be able to connect with your show.” Dee added, “to me, that’s why you care about the characters and why you come back and watch the show again.” The key is “the heart” that they put into the episodes.

Next up wit the ever charming and never aging Scott Grimes, who plays angst teenager Steve, Wendy Schaal who plays Francine and Kevin Michael Richardson who plays Principal Lewis.

Scott started by saying that all the work is done by the writers, animators, and crew and how much they go through and he merely adds the voice. He noted that the cast will sometimes read the script and wonder, “how are they going to get away with that, but imagine the things that didn’t make the cut and to think the writers actually held back.” 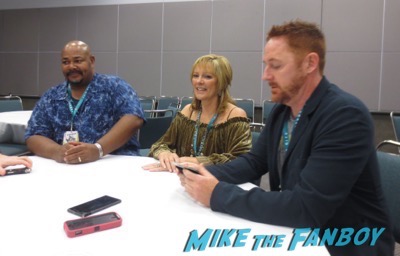 I asked Scott what it was like playing a perpetual 14-year-old unlike Chad McCann, a “Who’s the Boss” reference he totally appreciated. He thought it was an interesting question and said he didn’t feel hampered by the fact that Steve would always be 14. When asked about the switch to TBS and what’s been the biggest change, Scott referenced Kevin as an answer, saying “they allow a principal to get away with things on TBS that wasn’t allowed on Fox”. Kevin added, “there’s no way a black principal would get away with a quarter of the things Principal Lewis does. We’re talking the drug cartels, trying to take over the world, and selling his buttocks on the street.”

The group commented that they don’t have a lot of room for improv since the writing is just so good and that they table reads are the place to play around a bit. Kevin added that the table reads are different than the actual recordings because the group is together and everything flows, where as the actors are alone in the booth during the actual recording. Scott loves the opportunity to sign on the show, as he started in music, while Wendy noted that it’s difficult for her. Most of the cast has singing experience, while her only singing background was on the show itself.

Scott attributes the long standing success of the show to that pushing of the envelope “without being stupid”. Wendy added, that the success “is because the show was always about something too; they go to the moon and back to get there whether they realize it or not, but there’s always at the end something they’ve learned “.

Scott commented that it reminds him of the 80s sitcoms that ties up the episode with happy music and a nice ending with a big message. He said their show does that “as a sort of a joke but it still is a message”. He added in Steve’s voice, “you know what dad, you are right” and Wendy followed in Francine’s voice, “I’m sorry Stan, you are right,” to which everyone laughed. 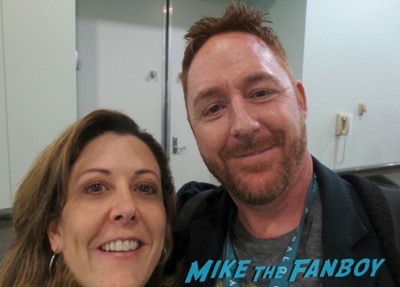