Seemingly out of nowhere this new film starring Michael Fassbender has been creeping into my social feeds and it looks amazing! I love the Fassbender, he’s one of the best actors working today and his new film, The Snowman looks creepy!

I really can’t wait to see it! It opens on Oct 20th and is sure to send some chills down your spine!

You Could Have Saved Her I Gave You All The Clues

The Snowman, a terrifying thriller based on the novel by Jo Nesbø is being released on Oct 19th. A sociopath who calls himself “The Snowman Killer” has targeted the one person for whom he wants to showoff his methodical, unthinkable skills: the lead investigator of an elite crime squad. With cunningly simplistic baits, he begs to have a worthy opponent to play his sick game.

When the next snow falls who will he take?

When an elite crime squad’s lead detective, Harry Hole (Fassbender) investigates the disappearance of a victim on the first snow of winter, he fears an elusive serial killer may be active again. With the help of a brilliant recruit (Ferguson), the cop must connect decades-old cold cases to the brutal new one if he hopes to outwit this unthinkable evil before the next snowfall.

Thanks to our friends at Universal Studios we have an awesome prize pack to giveaway to a lucky reader! Woo to the hoo!

The Snowman pack has:

1 – Limited Edition Snowman Plush Doll: This limited edition Snowman plush is only available via this promotion and has a run of 200 pieces worldwide. It is a replica of the killer’s Snowman and features a detachable head and the Snowman logo on the bottom.

1 – The Snowman Official Promo Shirt – An official promo T-Shirt featuring The Snowman logo on the front and the signature design on the back. 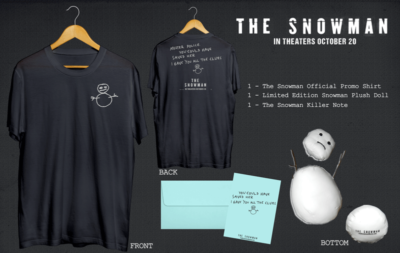 Check out a picture of the creepy snowman I got in the mail. It’s amazeballs! 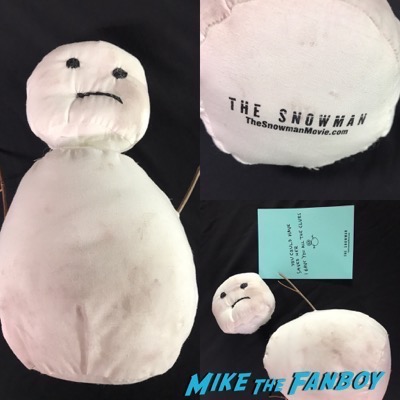 BUT… before we tell you how to enter, check out this amazingly creepy app!

• How well do you know America’s most notorious serial killers? Take the quiz and help Harry Hole find the Snowman killer by matching serial killers to their dark crimes.
• Take your investigative eye to the next level and dive into Killer Files! Learn more about serial killers and their gruesome ways… if you can handle it #nsfw.