Home / Fanboying! / Dallas Heads Out To Meet Republican Presidential Candidate Ms. Michele Bachmann And Has A Sort Of Run In With Her Husband! Doh!

Okay, for the record… I’m not a Michele Bachmann supporter or fan, however when Dallas sent me a list of people he wanted to write up, I asked him to write up this one. Why you may ask? Well, first off political “stars” fascinate me, and Michele is very much like Sarah Palin, at least to me. Plus, I’m not a Political collector so this is a new sub-genre of the hobby.

So, even though MTF is very non partisan, I wanted to include some perspective into the mix.
Dallas was kind enough to write this up for us so make sure that any discussions don’t become political okay? 😉

Hello Mike the Fanboy readers! Thanks for the welcome to the site, here’s another encounter from June of 2011 as this year comes to an end. I met Republican 2012 hopeful, Ms. Michele Bachmann, on June 29th in Greenville, SC. Yes, I was out of town, on vacation, and still thinking of autograph hunting so when the news was on that she was in the next town over my sister-in-law and I drove down there to try and meet her. My friend Presley, from my Maria Menounos article, had attended a Michele Bachmann rally in our town of Myrtle Beach the day before and the crowd was so large she left with no signature and no photo with- poor Presley!

2:00- At home still, reading reports and there’s conflicting times, some say she’s scheduled to appear at 3:00, some says 3:30, and some say 4:00- not wanting to be late and not wanting to be sitting out in the parking lot in the 94 degree heat, we decided to leave to embark on our 35 minute drive at 2:40

3:02- We get into Greenville and this address is so not wanting to be recognized by our GPS. She’s supposed to be in a parking lot of a mall but there is no mall in sight. We ride up and down the main highway, where we pass construction sites and big stores but no mall.

3:17- We finally turn into this “mall” which the entrance is covered up by a huge construction, and the event is in the back of the parking lot.

3:24- Obviously, most people thought the event started at 3:00 as the place is packed with about 200 Bachmann supporters huddled around a mall circular stage. The announcer says that she’s running late and her bus is pulling off the main highway now (where I got lost 22 minutes ago  )

3:35- The “Big Blue Bachmann Bus” arrives- try saying that 4 times fast! Crowd goes wild and she steps off the bus where the local tea party man introduces her as the next President of the United States of America 😉 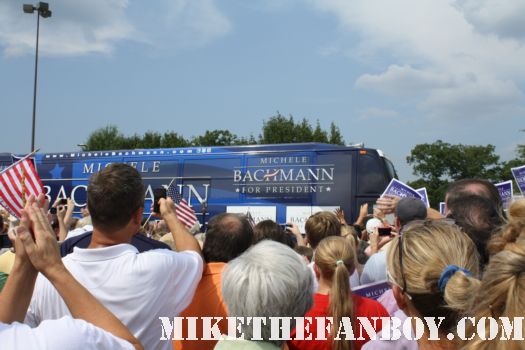 3:41- She gives a 18-20 minute speech about how she wants your vote and how she’s gonna do everything in her power to “Make Barack Obama a ONE TERM PRESIDENT”- she screams that at us 6 or 7 times, 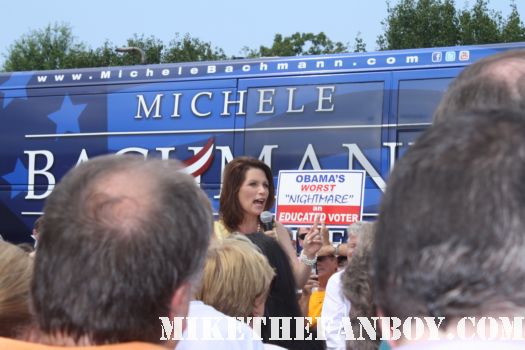 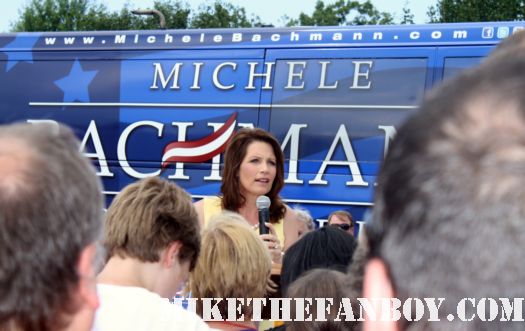 that’s the majority of the speech, I didn’t really learn a lot about her and her positions which is what I wanted to do but I was still fine. 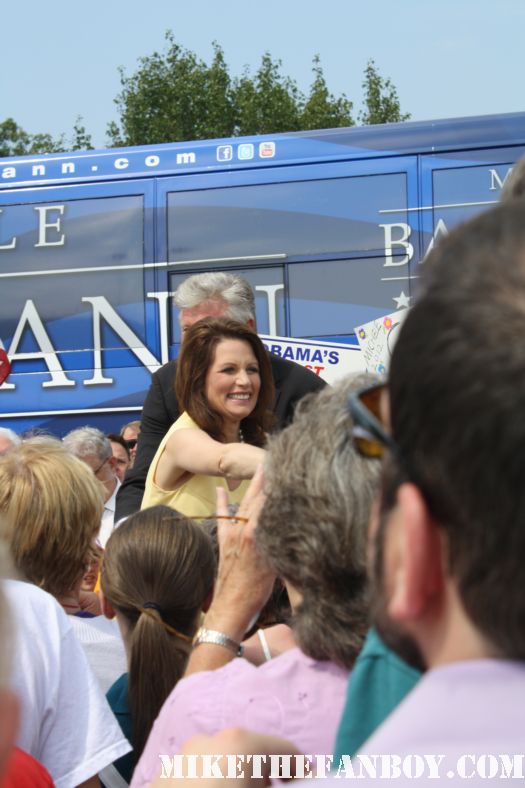 4:05- She starts greeting supporters around the rope where her mini stage is shaking hands and signing things, of course I’m in the back, then finally she goes back to her podium where she was speaking and just stands there and signs for at least 10-15 minutes and slowly once people get everything they want signed they back away. 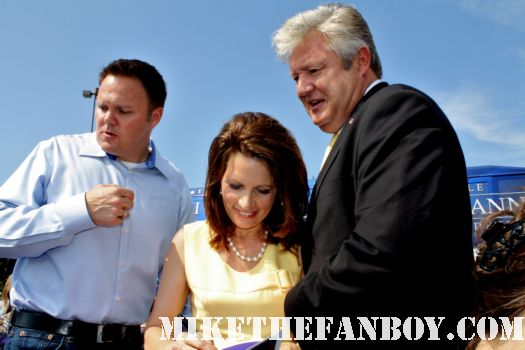 I’m able to get up there, I hand her my sign and she writes a big bold “Michele” on it- which looks AWESOME! In person.

4:17- I’m trying to get some doubles, I have my index card that I’m handing up to her, the husband is handing her things to sign, he’s literally looking direct at it and ignoring it, until finally she sees it and takes it. He was rude to everyone but she signed anything she got her eyes on, which is always a plus in my book.

4:25- She moves over to the right side of the stage now away from the podium when people start asking her for photos. My sister-in-law has my camera around her neck and she gets the husbands attention and says “a photo with her please?” He looks her up and down (she has tattoos), and says NO. firmly. Which really made me angry- She wasn’t asking for her, but for me. I finally get close enough to her and I’m brave enough to tap her on her shoulder and she says sure and poses with me. Dallas has officially achieved his happy level!  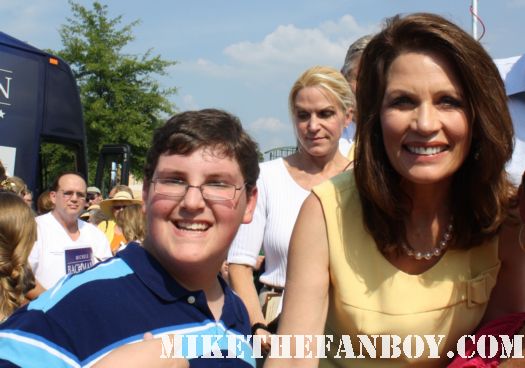 4:33- We turn to leave and then I notice a stack of the rally signs sitting there that didn’t get passed out, I think back to Presley getting a rock at the previous days event and I run back up to where she’s at the podium still signing and luckily get her to sign one more. AWESOME! 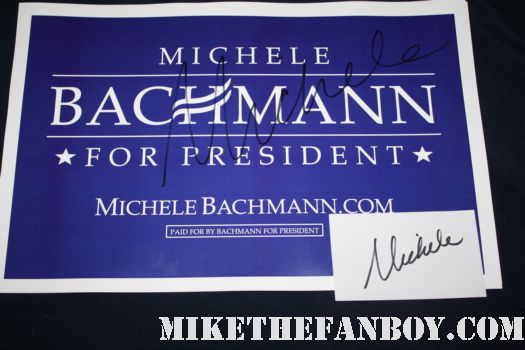 4:42- Not bad for a presidential campaign rally, I’ve been to ones with crazier crowds then that (ahem…Bill Clinton….ahem….-but that’s for a later article). I got 3 and a pic with- I was happy.

I was not planning on meeting Ms. Bachmann since I was out of town so the morning before that I sent an email to the manager of the location she was having her event at in my town asking if they could have her sign something for me- they didn’t reply so I figured it was a no so I went to the rally. When I returned from vacation, there was a huge UPS box on my doorstop with a rally poster signed “To Dallas, I missed you! Love, Michele Bachmann” –So sick!! Personalized! Inscribed! AND a full signature?!! Let’s just say, I was thrilled! Say what you will about her politics- she has the handwriting autograph collectors only dreaming about celebrities actually having LOL!
 

Thanks for reading! Till next time!

(PS: For those of you that read this whole article, went through the pictures and realized I’m wearing the same shirt that I wore to Maria Menounos’s book signing, that was only a coincidence. No, I don’t have some lucky autograph collecting shirt LOL!)