Home / Directors • Fanboying! • Q and A / David Fincher Gone Girl Q and A! Meeting The Iconic Director! Dealing With Crazy Fans! And One Wacky Woman!

“You told me to come back!”

I know a lot of people are huge fans of actors and actresses, and I’m one of them, but I also love directors. There are some directors, that no matter what they direct, I’ll go, because I know their work will fascinate or inspire me.

I have only met David Fincher one time, when he was out and about promoting The Social Network, but his films always are interesting. Even when they are not successful, like Alien 3. Which, to be perfectly fair, was not his fault. Why the studio interfered with that one, still bugs the shit out me. It would have been such a different film if he was allowed to do what he wanted.

Sorry, I could go off on a tangent. In fact, that may have been a tangent… lol.

When I heard that David was doing a rare q and a for Gone Girl, I knew I had to go. When I started going over his filmography, I was like.. Oh crap… There’s so many amazing movies of his!

When I arrived on a chilly Los Angeles night, It was just little old me waiting, Scotty was heading over after doing another event.

I was trying to decide what to go for first.

Jodie Foster already signed Panic Room perfectly, so I figured it had to be that. I can call it done with the two of them. Plus, Daniel Craig and Rooney Mara both signed my Girl with the Dragon Tattoo mini poster, so that had be second.

I also found this rare piece last year. It’s a resin car of soap from Fight Club. I was told that it was one of the rejected prototypes from the poster, but you know… I didn’t think they were right. But either way it’s a cool replica, so I figured it was worth getting.

Also coming to the q and a was Gillian Flynn who wrote Gone Girl.

After a bit Scotty arrived and then about six more people showed up as well.

A car pulled up and it was Gillian Flynn. She was so sweet. I had her sign my Gone Girl mini poster, after she was done, I turned around and David Fincher literally walked up from behind us! 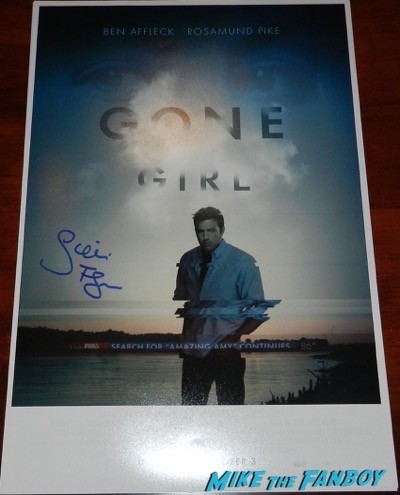 I grabbed my Panic Room poster and David Fincher signed that, and my Dragon Tattoo poster as well. 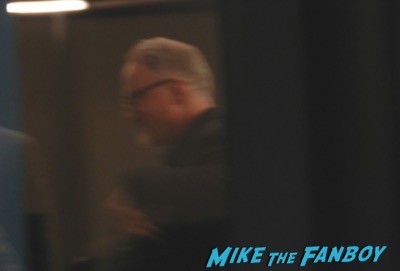 Scotty told David that Panic Room was one of his favorite films, and David said, “You need to get out more.” lol.

I think it’s his sense of humor.

Then as David was signing some other stuff for another guy, I asked him to sign my bar of soap.

David looked at it and was like, “How did you get this?” I told him that I was told it was the prototype for the poster, but I wasn’t sure if that was real. As we were talking David kept turning it over to look at the back and then he said, “That’s absolutely what this is. I can’t believe you have it.” 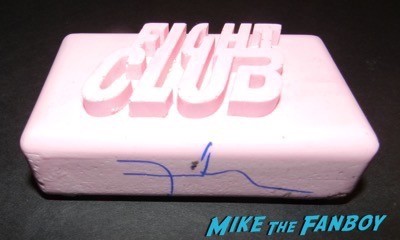 Then he signed the bottom edge for me. Holy shit David Fincher just authenticated my bar of soap. I’m so stoked you have no idea. 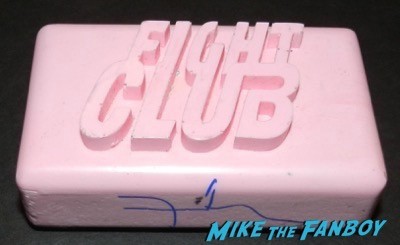 One guy had Alien 3, and David flat out refused to sign it. He said, “sorry, I can’t sign that. No way.”

David then went inside and Scotty and I decided to wait for David Fincher to leave. I’ve only seen him out one other time and that was 2010.

A few people arrived to the screening late to watch the q and a, and things got pretty damn strange at this point on.

Apparently, the theater was full and one woman was freaking out. She was banging on the windows and screaming, “You told me to come back!” She was trying to talk to one of the guys inside, and it was getting ugly.

“I came back, you told me to come back. Let me sit in the lobby so I can hear the q and a through the door!” She screamed.

The guy, must have said no or something and then she screamed, “I’m not rude, you told me to come back!”

This went on for about 25 minutes. There were only like four of us still left and It was crazy to see it. The guy inside had to open the door to let someone either in or out and the woman tried to barge in, the guy had to force her out, then it got even crazier!

That died down and then the q and a ended.

Scotty had a Madonna calendar from the late 1990s. David Fincher directed the videos for Express Yourself and Vogue.

When David left, he came over and signed my Seven mini poster and then looked at Scotty’s calendar and said, “Oh man.” Scotty had Fight Club for a friend, David signed that and scotty asked him to sign the calendar. David said, ‘Oh no.” 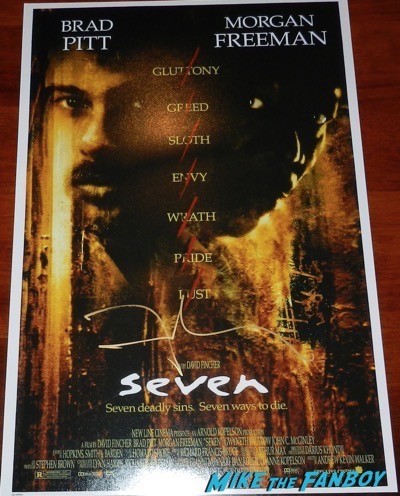 David Fincher said, “There’s another word for that… Memorable.”

It was an interesting night to say the least, sorry I couldn’t get more photos, it was just so fast that it was a little impossible. 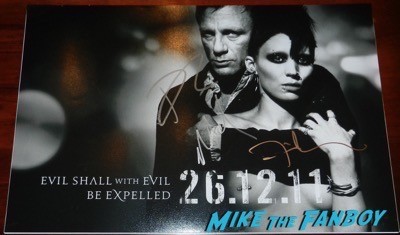 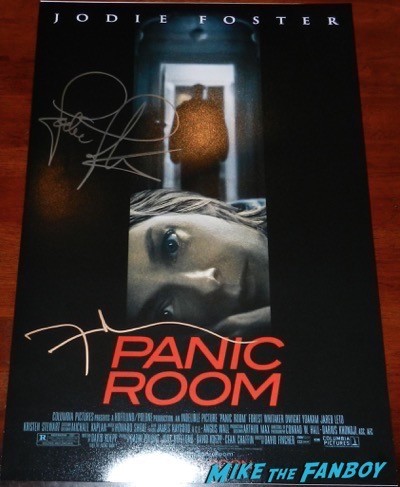