A few weeks ago, my fiancé, Justin, and I traveled to Washington, D.C. for little visit. Since we were in the area, we decided to pay a visit to Baltimore, Maryland, home not only to Justin’s brother and sister-in-law, but also to that famous font of filth, John Waters, and his muse, Divine. We quickly made up our minds that we must pay our respects to Divine himself (a.k.a. Harris Glenn Milstead) at his final resting place, Prospect Hill Cemetery, in Towson, a suburb of Baltimore.

We started out from D.C. pretty early in the morning to make the hour-and-fifteen-minute drive. Even though it was the middle of November, the weather was surprisingly warm as we enjoyed remnants of the fall colors decorating our route.

Prospect Hill Cemetery is very unassuming even as it touches the edge of a booming shopping district. I think we arrived at precisely the right time as the sun was in the very beginning stages of setting. Small in size, Divine rests deep in the heart of the cemetery. One of the first things I noticed is that the driving path is very narrow, but you will know you’ve arrived at the vicinity of the gravesite when you see a small indent in the drive, which I can only assume is a parking spot. Oddly enough, the cars breezing by just outside the cemetery complimented the solemn atmosphere in the air and, luckily for us, we were the only people there. A tip for finding the gravesite: if, like us, you are fortunate enough to be able to park in the indented spot, Divine and his parents rest to the right of it. 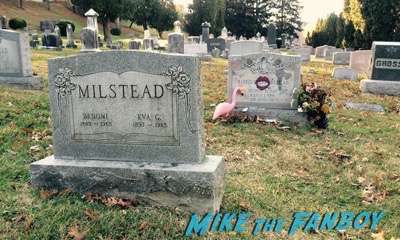 As you can see in the photos, the headstone itself is very basic, but it’s the fans who have provided the tributes which acknowledge the reasons for Divine’s rise to fame, probably the first instance I’ve heard of where desecrating a grave is not only allowed, but expected. Along with various graffiti, a gigantic set of red lips are plastered right in the middle of the face of the headstone, 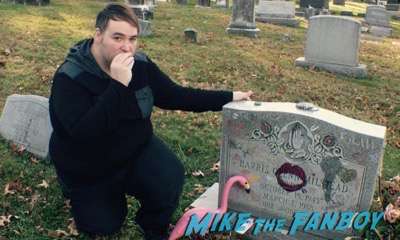 a pink flamingo lovingly driven into the earth with things like a handwritten note, cigarette, rolling papers, eyelashes, a bouquet of flowers placed all around. A plastic tiara rested right on top. 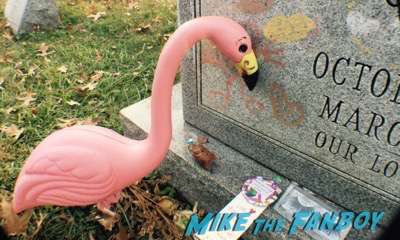 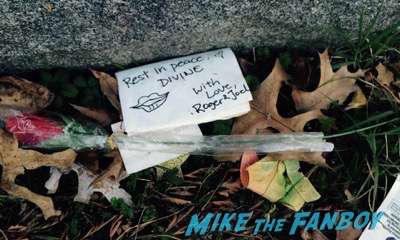 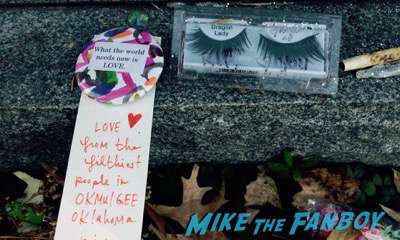 Arriving empty-handed, Justin and I both wanted to pay some sort of tribute to the legend that was Divine. Thinking on my feet, I remembered that I had a small container of homemade fudge that I picked up somewhere off the beaten path in Pennsylvania. I made my way back to the car, grabbed it, and hastened back to the gravesite. I kneeled down, pinched off a chunk and fashioned it, ate a generous half, and left the remaining portion for Divine, all in tribute to his iconic, career-making scene in Pink Flamingos. For his tribute, Justin decided to honor Divine by sharing the roach of his joint, a gesture that Divine, a well-known pot smoker, would have appreciated. 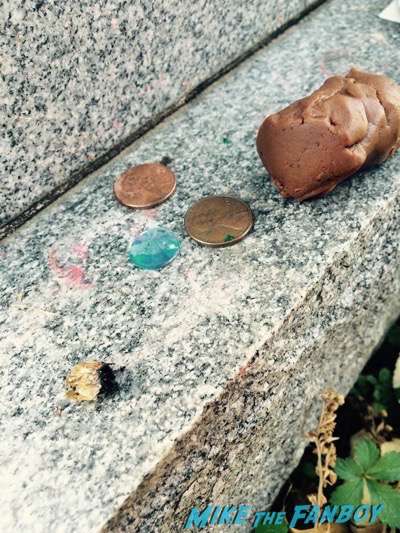 After a round of pictures of us next to the grave (a special thank you to Mama and Papa Milstead for “taking” a picture of both me and Justin at their son’s grave by allowing me to rest my camera on their headstone), 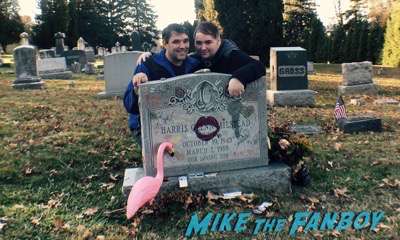 we made the journey to meet up with Justin’s brother and sister-in-law deep in the heart of John Waters’ neighborhood where you encounter pink flamingos at every turn. We pulled into a 7-Eleven and, while I was in grabbing a Coke Slurpee (don’t judge!), Justin ran across the street to Atomic Books, which, come to find out, is a bookstore strongly linked to Mr. Waters himself (he even encourages fans to write to him there and they are always good about forwarding him his mail). Finally, we met up with Kevin and Carrie, and they escorted us to various neighborhood bars they enjoy. The bars were all very warm and inviting, our good time enhanced by the fact that our hosts were well-liked regulars at these establishments. As we hopped from bar to bar, I began noticing the architecture, particularly the scads of row houses. I felt just like I was walking around in Tracy Turnblad’s neighborhood!

Yes, we had an enjoyable time, and not one single encounter with a rat (that happened in D.C).