Home / Fanboying! • On Location / Mike The Fanboy On Location: The Sons Of Anarchy Set! With Charlie Hunnam and Ryan Hurst! Jax and Opie!

Oh dear, I know at least one person that is going to be jealous of this write up! LOL… In fact I don’t think an article for Mike The Fanboy has caused such a ruckus as this one… I know what you’re thinking… “Can you describe the ruckus…” No… I can’t, and I won’t but I will say, that if you are a Sons Of Anarchy fan, the photos alone from this write up will probably kill you.

I don’t want to hold anyone in suspense any longer, so I’ll just get on with it! So, without boring you further… I present CB’s second encounter on the set of Sons Of Anarchy!

NANANANANANANANA, CB, CB, CB! If you don’t know, let me just start off by saying, I AM A HUGE SONS OF ANARCHY FAN. Everyone on the MTFB family has their own show that stands out, and I do love me some SAMCRO! I’ve met everyone in the cast, and the one thing that I truly, TRULY appreciate is how nice each and every actor is to their fans. Charlie Hunnam, who plays the lead role of Jax Teller is one of the greatest people I’ve ever, EVER had the pleasure of meeting. Considering he is the lead on a hit show, it’s shocking how down to earth the guy is. I’ve got nothing but praise for everyone on the cast. Every time I watch season 4, which is currently airing on FX on Tuesdays at 10 pacific time (check your local listings…yes, I will plug the hell out of this show!), I’m on the edge of my seat waiting for the next episode. It’s shaping up to be the best season yet, which is madness considering how great the past three seasons were.

Today I found out they were taping an episode near by. I can’t disclose the location because it’s an essential part of the storyline and essential may give away spoilers. I had some stuff for Charlie and a poster that is just one of my favorites. I went along my merry way and hoped for the best. 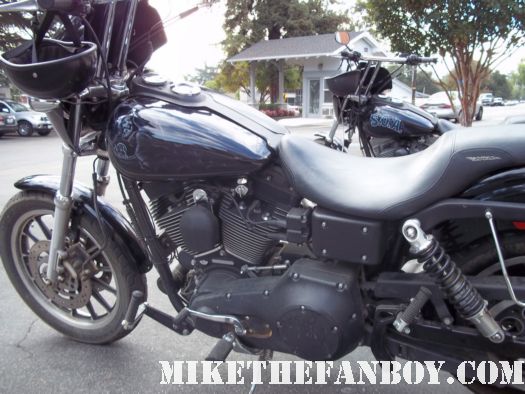 Right behind it is Opie’s Bike. At this point, I spot Ryan Hurst who plays Opie and Charlie Hunnam filming. WOW!…..all I can say is, WOW! 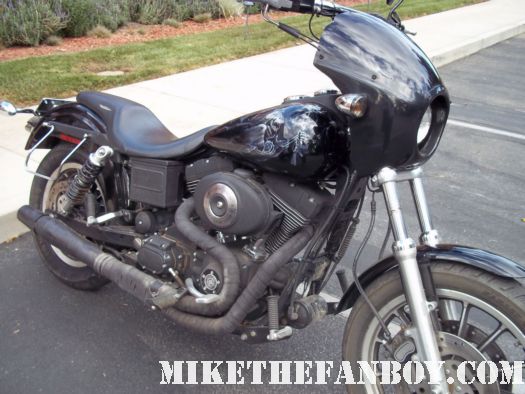 6-10:00 They are filming and we are watching them film a scene from several different angles. We wait patiently for a chance to meet the stars. Since I’m a fan of the show, I will not disclose what is being filmed. I rather everyone watches without spoilers!

10:15: We hear cut and Charlie and Ryan are coming over to us, and I’m fanning out because they are BOTH coming over together and they are in their cuts aka vests. 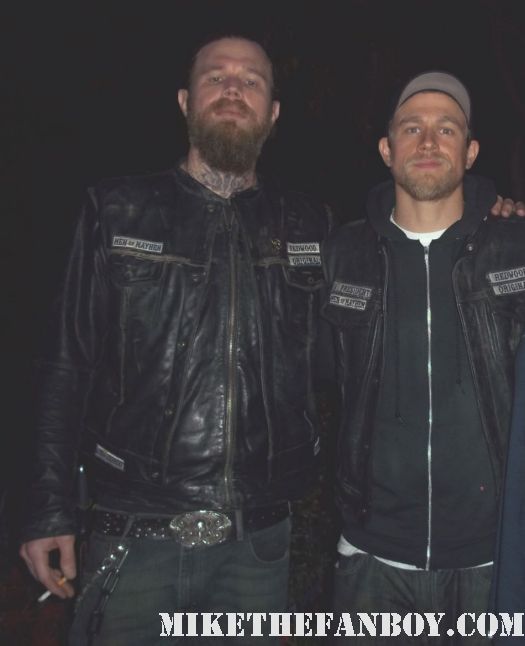 First thing out of my mouth, “can we take a picture with you”, then Charlie says to Ryan, “lets take them together’……I damn near fell of my feet…..I’m here next to Jax and Opie in costume taking a picture with them…… 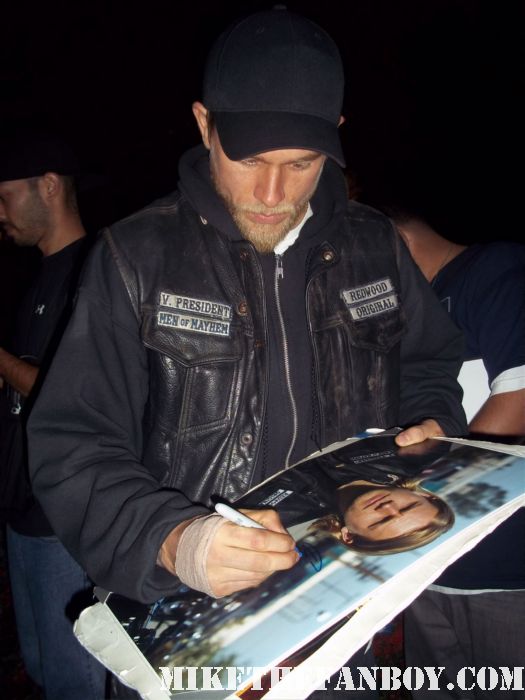 10:17: Of course I’m blabbing, how Annette told me to blow Charlie and kiss for her, (which I told him, and I have a witness), and Charlie says, tell her thank you….I told Ryan Remember the Titans is one of my favorite movies and he smiled and thanked me….I made Opie smile… 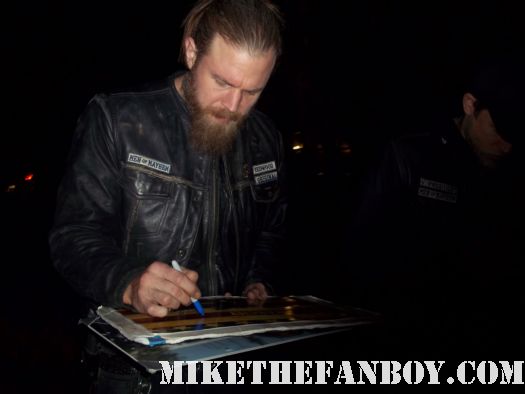 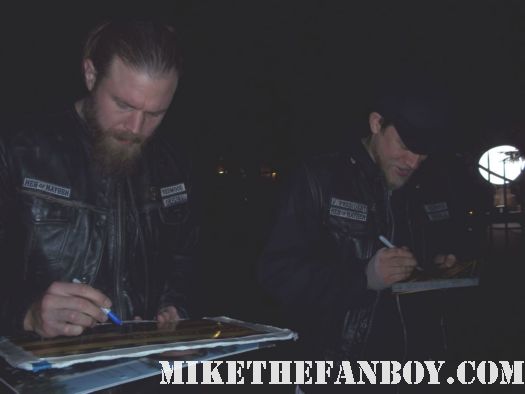 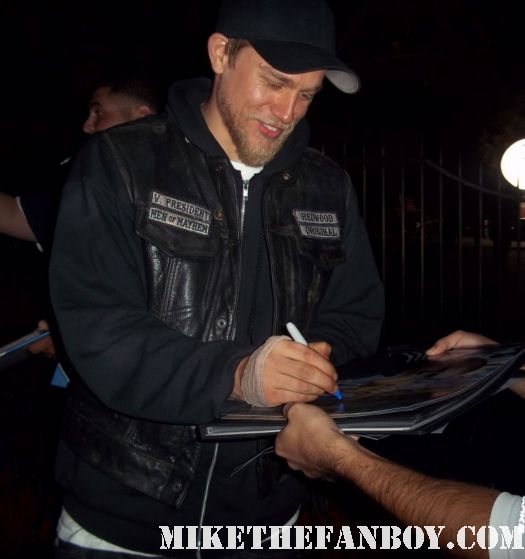 See, this is what I love about the show. Not only is it amazing, but the cast is amazing to fans. I just can’t stop praising the show. Everyone should check it out, and tell one of their friends about it, who should tell another and so forth. The show is so great, I kinda have to give away something SOA right? So show your love in the comment box and we may have a nice treat in the future. Remember, you can catch it on FX on Tuesdays….Until next time, same CB hour, same CB channel, same CB BLOG!! KAAAAPPPPPOOOOOOWWWW! 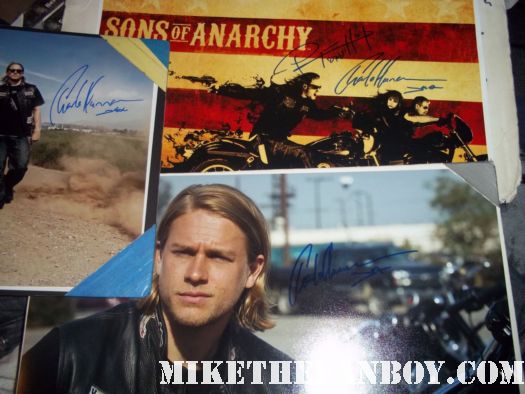 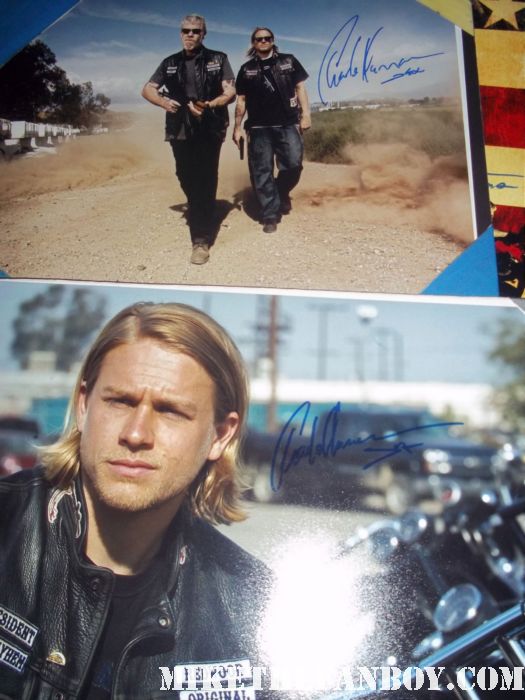