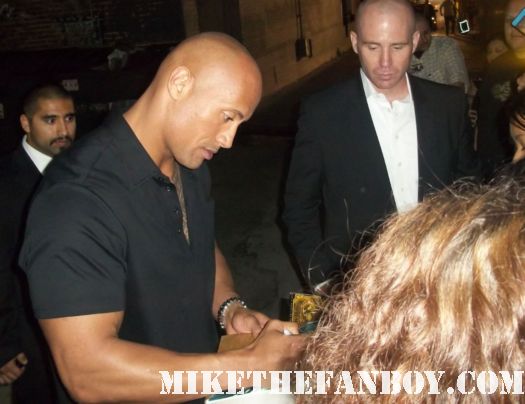 Can you smell what The Rock is cooking? Uh, well no… No, I don’t want to smell what The Rock is cooking, in fact I don’t want to smell anything The Rock has, will have or has had… LOL, CB however… I can’t even do that joke, lol… CB is a HUGE The Rock fan, or is it Dwayne Johnson now? Anyway, The Rock or Dwayne Johnson is out and about promoting Fast Five, and CB was determined to get him to sign some stuff!

Check out his full, and overly enthusiastic report below!

NANANANANANANAN CB, CB, CB! Today I am really, really psyched to go for “THE GREAT ONE”, “THE PEOPLES CHAMPION”, “THE BRAVA BULL”, DWAYNE “THE ROCK” JOHNSON. TO THE MILLIONS, AND MILLIONS OF FANS CHANTING HIS NAME, ROCKY! ROCK! ROCKY! Yes, I am super excited, and yes, I watched wrestling as a kid, and YES I know it’s scripted. “IT DOESN’T MATTER WHAT YOU THINK OF WRESTLING”. I have been a fan of Dwayne’s work since he went by the name Rocky Maivia, so yes, I’m beyond stoked. The Peoples elbow, the peoples EYEBROW, the Rock Bottom, hell even his song with Wyclef John was great. CB says, “The Rock Says he is going to lay the smacketh down on all your candyasses.” Also on the program is Sammy Hagar, former lead singer of Van Halen and current Cabo Wabo tequila seller. I actually enjoy his work in the group Chicken foot, but Joe Satriani is just great though. I’m armed and ready to lay the smack down of my photos, if you smellllllalalalalalalalalalala what the ROCK IS COOKIN!

5:00: WOW, there are a lot of people. Lots of Fans. I’m really psyched because my main goal is to get a photo with “The Great ONE”. Please don’t layeth the smacketh down on my candy ass Rocky!

5:30: We see security move and it’s Sammy. He calls for him and he waves and goes right inside. RATS

6:15: Sammy Hagar comes back out and goes to the parking lot. 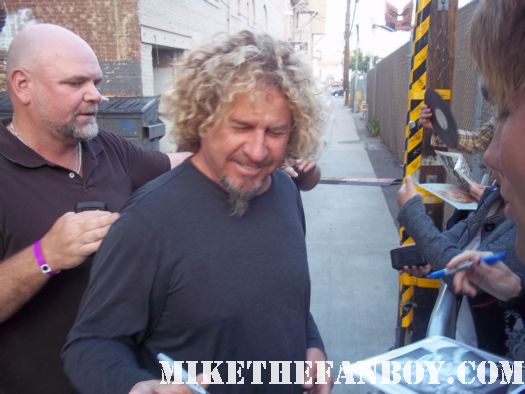 We chant for him, and guess what, he comes right over. I get him to sign my photo and 4X6s…Really nice guy. 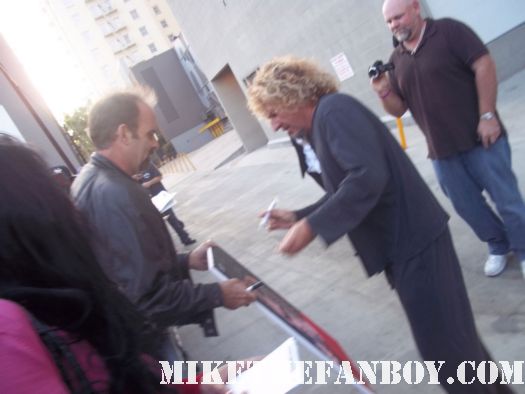 He signed someone’s Van Halen 1984 Album, even though he wasn’t the lead singer yet. Making the comment, ” you have the only Sammy Hagar signed 84 album”.

6:35: The electricity is in the air. You can hear the crowd chant his name. ROCKY, ROCKY, ROCKY they cant. FINALLY, The Brava BULL HAAAAASS COME BACK TO CALIFORNIA! We get the Rocky chant started and he hears us, but he’s late and has to go in. He says he’ll sign on the way out.

8:00: The Rock has left the BUILDING! He leaves and goes to the parking lot, and comes back to us. We start the “ROCKY” chant again. He comes over and says, I’m going to start at the end and work my to the front. 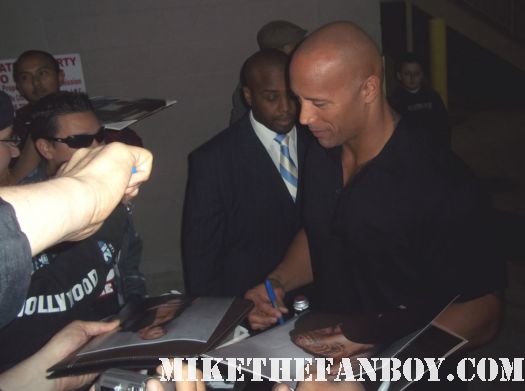 The Peoples champ greets his subjects. He signs my photos and I finally get the photo with him I’ve wanted for years. Anushika wants to get a photo with him too, but The Rock misses her. The King of Dorkus (CB Note: Mike would agree) calls for him to come back and take a photo with her and he obliges. He signs and leaves us speechless. 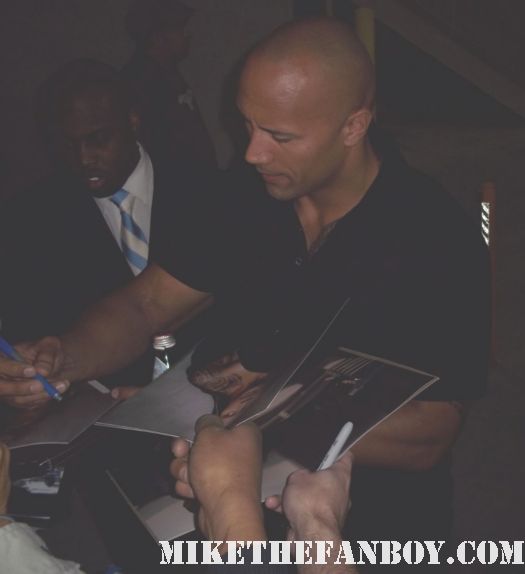 8:30: Petra Nemcova leaves and we call her over. 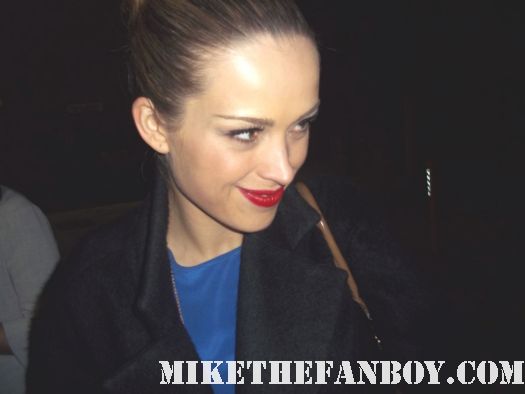 She comes over and signs my photo, and quite a lengthy autograph I must add. She’s really sweet and tells her story about surviving the Tsunami. 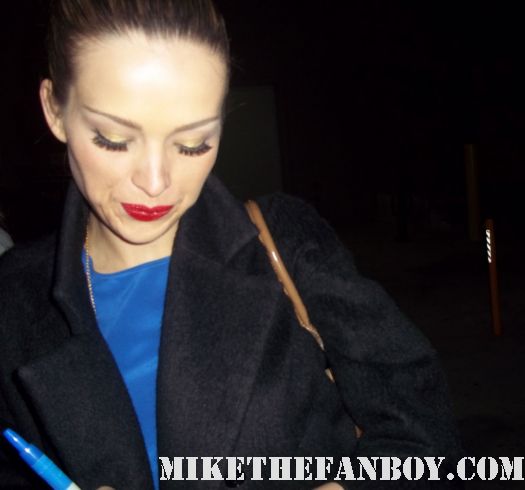 She takes a photo with me and leaves a minute later. I’m happy. 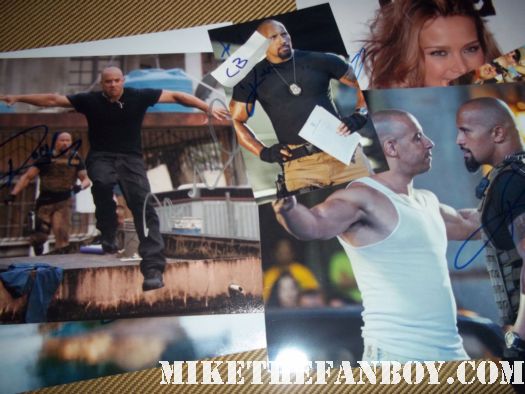 Did I tell you I was jumping off the walls??? I am so so so so so happy. I got everyone I came for today and photos with everyone as well. Great day indeed. Until next time, same CB hour, same CB Channel, same CB BLOG!!! KAAPPPPOOOWWW! 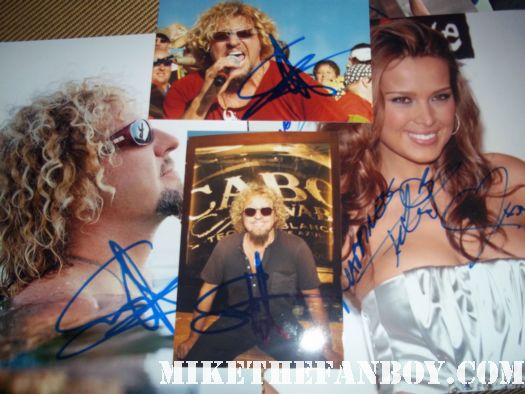