Home / Fanboy News From Around The World / Fanboy News! Steph Curry Tattoos His Signature On Someone’s Leg! Michael Jordan Signed Card Sells for 95K! Umm Don’t Ask For An Autograph During a Miscarriage! And More!

Ummm so don’t ask for an autograph during, before or right after a Miscarriage It’s a rule of thumb. Yikes!

A Michael Jordan autographed card sold for $95,000 through PWCC Marketplace, according to TMZ Sports.

It looks like Steph Curry has run out of things to autograph.On Tuesday, an Instagram video showed the Golden State Warriors star tattooing his autograph onto someone’s leg. And he did a pretty good job! Then again, what else would you expect from Steph Curry? He was a little tentative, but since he’s permanently needling ink into someone’s skin, that’s to be expected.

@stephencurry30 if that basketball thing ain’t working out fo you😜, you’re more than welcome to join our team @zebratattoowc #zapbyzip

Kevin Feige has had a key role in the development of Marvel films since 2000’s X-Men, when his vast knowledge of the comic book universe impressed executives. He has since become President of Marvel Studios, overseeing a string of MCU superhero films for 10 years, culminating with Avengers: Infinity War this summer. In service to the millions of Marvel fans mourning Stan Lee’s recent passing, Feige has now shared his last interaction with the comic book mastermind. In his words: 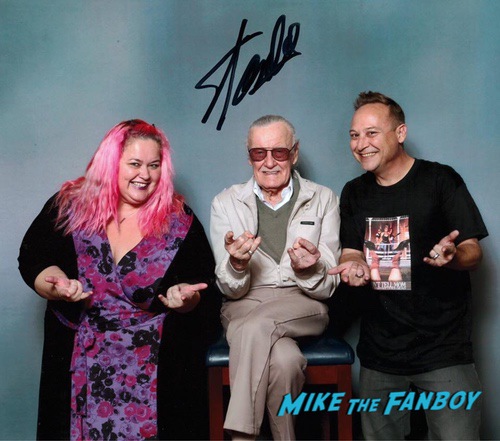 As we all know, Kate Middleton and Prince William spend their lives meeting people.They must have shaken a million hands at this stage.Now, none of us have ever had the pleasure, but we’d imagine it can be daunting to meet a member of the royal family.Do you bow? Do you kiss the ring? Do you high five them? The stress of it.

The wife of England cricketer James Anderson says a midwife asked for his autograph during her miscarriage.Daniella slammed the “deeply inappropriate” request, which she claims was made during the loss of her son at 13 weeks.England fast bowler Jimmy flew home from India to be by his wife’s side for the heartbreaking moment.

Many years ago, I fell heir to an old barn next to my grandparents’ residence in Whitehall.I don’t know what possessed me but I saved boxes and barrels of stuff stored there by my ancestors. The valuable materials I donated years ago to the Wisconsin State Historical Society, but I still am in possession of little things that I occasionally peruse in order to figure out what my ancestors were really like.

We’ve all been there. You’re out doing whatever, see a face you recognize and say to yourself, ‘oh my gosh, that’s (insert the name of a famous person or athlete here)’.At that moment, you have a choice to make. Either you move on with your life after a few more glances in their direction, or you introduce yourself to potentially ask for a quick photo and/or autograph.

For the next four Mondays, Packers players will be signing autographs to help the Salvation Army reach its donation goals for the year.And Packer players Jaire Alexander and Josh Jackson definitely have a fan club.”They’re great characters, Jaire has got a great personality, Josh he’s up-and-coming, he’s going to do great things for us,” says Chad Blumenschein from Rhinelander.”We liked Jaire from the start and it was just really exciting to meet him,” says Haley Wood from Balck River Falls.