In another edition of Fanboy News!

The Walking Dead fans got some crazy autographs this past week, some need to be seen! LOL. A star gives up his surfboard to a fan, Martin Freeman’s Sherlock woes, and more.

NBA players get hounded by autograph seekers all the time, so you can forgive Cavs forward Larry Nance Jr. for snubbing a young fan this weekend in Los Angeles. Luckily for the kid, though, Kevin Love was there to save the day.

So…. this happened today. Might have ran straight from JDM’s auto line to the tattoo area. Annnnnd I regret nothing😜 pic.twitter.com/bD0S7dZc1l

Some of Britain’s biggest TV stars were snapped on the red carpet at this year’s Television and Radio Industry Club (TRIC) awards in Central London.

Retiring superstar Mick Fanning has made a young fan’s day despite being eliminated in the fourth round of his second-last event on the World Surf League tour.Fanning was approached by a young supporter seeking an autograph at the edge of the water after his ride at the Snapper Rocks event. 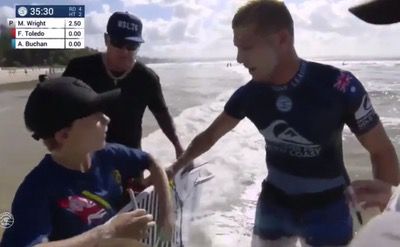 ‘The Walking Dead’ Fan Gets Norman Reedus Tattoo On Her Head

A fan of Norman Reedus and The Walking Dead made it permanent at Walker Stalker Con in London over the weekend, getting the Daryl Dixon actor’s autograph tattooed on her head.

The identity of the super fan has not yet been discovered by ComicBook.com However, while attending one of Walker Stalker’s largest conventions of the year, this woman waited in line to meet Reedus and ask for a signature. Instead of having him sign a headshot or still image from the AMC show, she had him sign the top of her head. It didn’t end there, as she marched right over to one of the professional tattoo artist with a booth at the convention and had the autograph permanently inked onto the top of her head.

After the reaction to the fourth season of “Sherlock,” Martin Freeman isn’t exactly chomping at the bit for more of the BBC mystery.

Talking to The Telegraph, Freeman says the show’s massive popularity meant it was difficult to keep meeting fans’ expectations. Especially the ones who really, really wanted Watson and Sherlock (Benedict Cumberbatch) to hook up.

“There was a chunk of people who just knew [Season 4] was going to end with us getting together. Me and Ben, we have literally never, never played a moment like lovers. We ain’t f***ing lovers,” he fumed to The Telegraph. 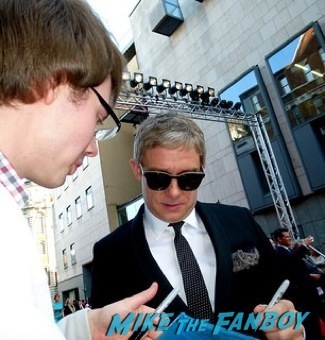 ‘On your next album, can you please write a song about disability?’ Ed Sheeran hugs nine-year-old superfan with cerebral palsy in emotional backstage video

The British crooner is currently touring his Divide album Down Under, wowing stadium-sized crowds of his devoted Australian followers this month.

But Ed Sheeran made time for a special meeting with one young fan with cerebral palsy over the weekend.

It starts with one … and after issuing a three-song EP in January titled the Post Traumatic EP, Linkin Park’s Mike Shinoda has confirmed work on a new solo album. The way in which Shinoda let the news come out was rather unique though, showing his love for the fans by dropping the news nugget at an impromptu gathering in Hollywood.

I feel like meeting up with you guys later tonight.