The biggest signing of New York Comic Con (NYCC) 2014 was clearly the cast of Daredevil at the Marvel booth. No, we’re not talking a reunion of Ben Affleck and Colin Farrell from the 2003 film! Daredevil is the first of four Netflix TV series that feature Marvel characters. The other titles include Jessica Jones (Alias), Iron Fist and Luke Cage who, Marvel fans will note, all live in Hell’s Kitchen, New York. Debuting next year, Daredevil is taking a different look at the source material so expect something different for the TV show versus the film! 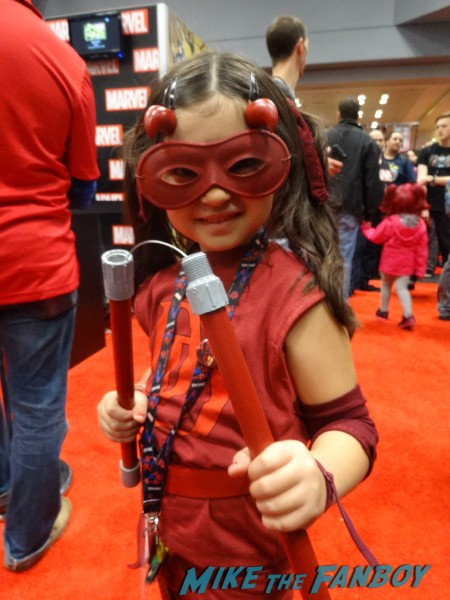 Ok, the new TV show is not THAT different –I just wanted to show this adorable Daredevil with pigtails. Matt Murdock will not be sporting pigtails in the TV show!

The Daredevil cast and creators made their first appearance at NYCC (in Hell’s Kitchen no less!) with a signing at the Marvel booth and then a panel. If this signing was any indication, Netflix has a hit on their hands since the floor was packed with folks hoping to see the cast. I was lucky enough to snag a raffle ticket – whew! 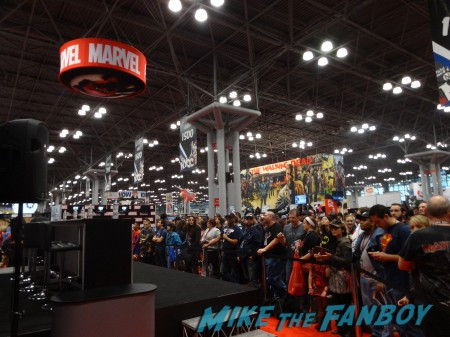 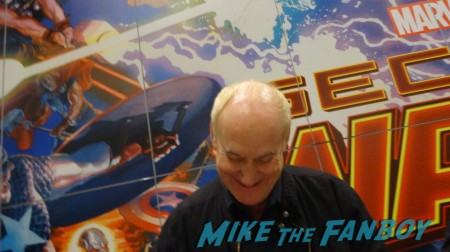 … and showrunner Steven S. DeKnight (yeah!) whose other work includes Angel and Spartacus. Not a bad track record, right? 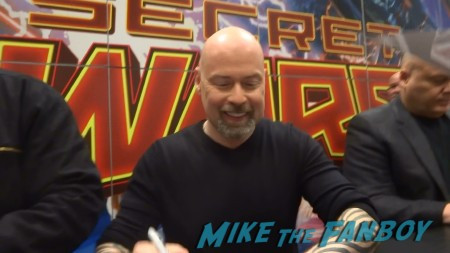 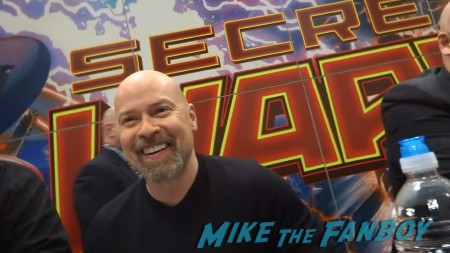 Vincent D’Onofrio, the Kingpin himself was also on hand… 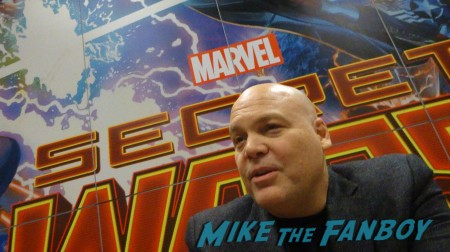 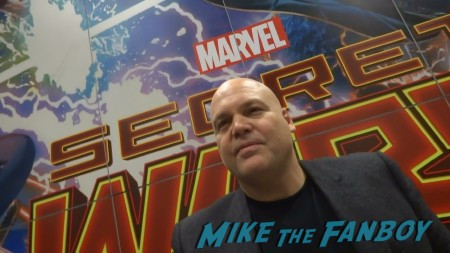 As sweet and as gorgeous as ever, Deborah Ann Woll is leaving Bon Temps and the fangs behind to play Karen Page. 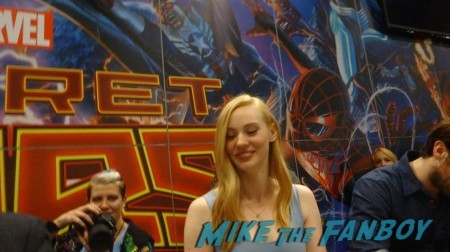 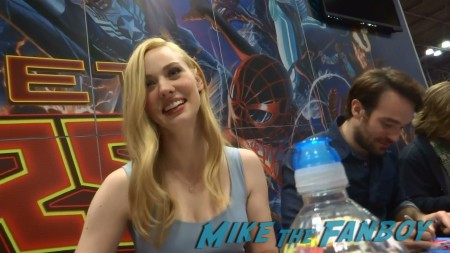 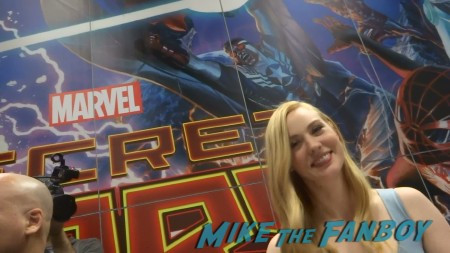 Eldon Henson (Pollox in the upcoming Hunger Games: Mockingjay movies) plays Foggy Nelson, Matt Murdock’s law partner. Eldon was happy to have a chance to talk to fans, but I don’t think he was quite prepared for all the masses of folks at the booth! 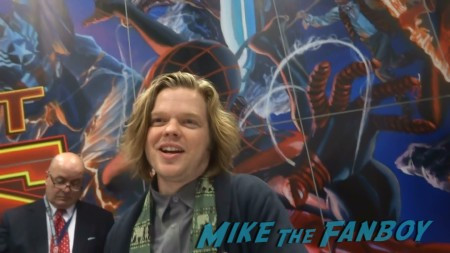 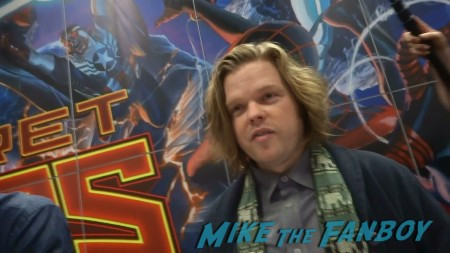 And, of course, Charlie Cox (Matt Murdock/Daredevil) was at the signing! When asked if he was nervous about taking on a role that’s already been brought to life in a movie, he answered “Well, I’m Daredevil, the man with no fear!” So adorable, charming and English! 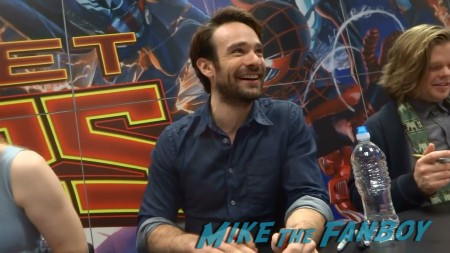 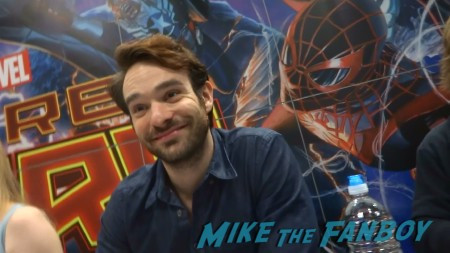 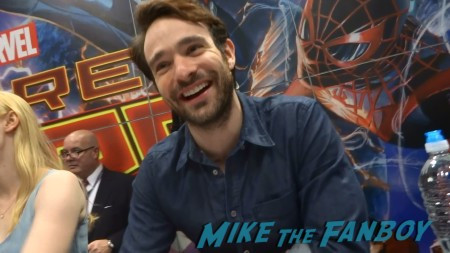 (Oh, and that Spidey who looks like he’s about to give Charlie a hickey? He’s a part of the artwork for Secret Wars and it’s not a scary stalker.)

Overall, it was a great signing and I’m looking forward to seeing the show!

Now, there’s been some online rumors about how the Marvel booth threatened to cancel this very Daredevil signing because they didn’t like the way fans behaved during the signing ticket raffle.

That’s the opposite of my experience with the Marvel booth. I’ve been going to cons for decades and I’ve seen the Marvel booth go from a folding table with a handwritten signing schedule taped to the table to the slick, fan-friendly center of the exhibit hall. Marvel has always tried to reach out to as many fans as possible and that was certainly the case for this signing.

Marvel made it clear that the line for the drawing would NOT start before 10:00 AM (when the hall opens). Although this is the policy for NYCC, not everyone enforced this rule so other booth’s lines would wrap around the booth when the doors opened (Cough! Bandai!). This is to make sure that ALL attendees have a chance to draw for the raffle and not just exhibitors or VIP badges.

Of course everyone didn’t listen so Marvel removed any of the early people in line. The drawing started just after 10 am and, well, the line was as wide as the aisle and not the single file line they requested. As a result, there was a scrum at the head of the line and kids, pregnant women, people with disabilities and basically everyone got bumped around. The pushing started to shake the walls of the booth and the wall-mounted TVs started to sway. Ah!!!

A few folks started cursing out the staff about their right to be there. (It amazes me that anyone thinks that this is a good idea.) And guess what, idiots? Getting angrier in a mob isn’t going to help!

At this point, Marvel killed the line. The natives were too restless to re-start the line in an orderly fashion and security came over. Security saw no solution so, in agreement with Marvel staff, they dispersed the line.

The signing wasn’t in jeopardy because the fans weren’t polite (as that post states). It was because there was a security issue and things were escalating.

Security shoo’d everyone away and when it calmed down, Marvel continued the raffle drawing. It sucks to get out of line and then back in, but things went smoothly after that. The raffle went forward and the signing itself ran like clockwork. 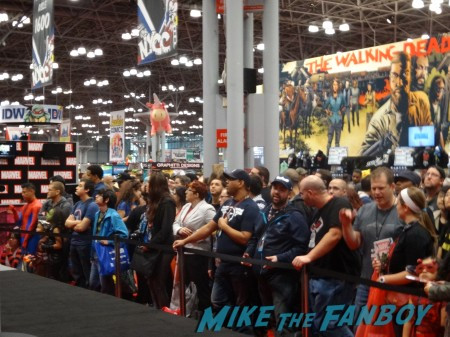 Marvel has always been great to fans and always tries to get as many people through the lines as possible. That article was clearly based on heresy from some of the angry folks so I wanted to set the record straight on what an awesome job the Marvel booth does!

I’m grateful that Marvel continues to give fans the opportunity to meet the stars of its movies and TV shows!

I’m also excited to see Daredevil when it premieres on Netflix next year! 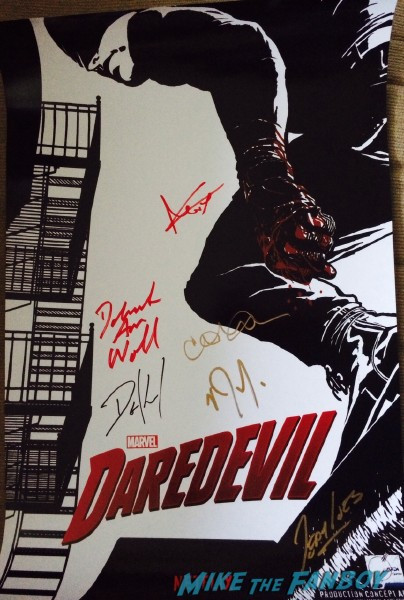