I’m a super huge fan of HBO and Showtime, I just feel like they are creating such great shows, and are blowing away the broadcast networks. Not that there isn’t anything I like on the Broadcast nets but… you get the idea.

The Lovely Erica is out and about tonight because HBO is premiering their new series Luck staring the legendary Dustin Hoffman. Erica though, is rolling the dice and hoping that Ian Hart is going to be at the premiere. Ian was in the first Harry Potter film and played Professor Quirrell…

Will Erica know when to hold em or will her Luck run out at the premiere! Check it out after the jump!

When HBO is going all out on a new drama, well, attention must be paid! Today is the premiere of their new series, Luck which stars Dustin Hoffman. The show has already been renewed so HBO has high hopes for this.

So I’m at the premiere with my trusty Harry Potter promo – Tom Riddle’s diary. No, I’m not planning on getting Dustin Hoffman on this, but Ian Hart is in the cast and I can’t resist the opportunity to add Prof. Quirrell. This diary has been a project several years in the making as I’m trying to get it signed by cast members from the 8 films. Yep, not a little task!

The trailers on HBO also prominently feature Michael Gambon so I’m hoping he’s crossed the pond for the premiere, even if he’s just a “special guest star.” As luck will have it (ha, ha! ), he did not so I will have to seek out Prof. Dumbledore another day.

This premiere is actually quite lax since there aren’t a ton of people here. It’s single file along Hollywood Blvd which never, ever happens. CB and Scotty are already here and have saved me a prime spot so we should be cool!

As we wait for the event to happen, someone spots Lindsay Pulsipher crossing the street. Lindsay recently played Crystal in the last season of True Blood. I’m hoping we’ll have more True Blood folks around. I wouldn’t complain if Game of Thrones people showed up either. Nope. Not at all.

It’s not a big premiere, but the red carpet is absolutely packed. It starts a bit late and the first to arrive was Richard Kind who walked over. A few others start to show, but it’s really hard to see. We do see Jill Hennessy arrive. She waves enthusiastically when we call for her, but doesn’t come over.

I’m struggling to spot Ian Hart who I am hoping will oblige us by wearing a turban so he’ll be easier to spot. Alas, no! No turbans today.

Nick Nolte is wearing a hat though. He and Dennis Farina arrive with nary a look our way. Oh yeah, this is not looking very promising.

Finally we see Dustin Hoffman arrive and we start to yell quite a bit. He is running late for a change so there is some discussion before they take him over. 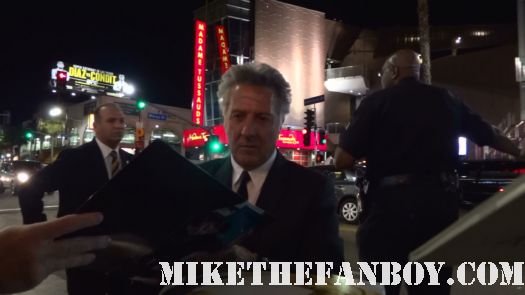 There isn’t a lot of security so it takes some time to assemble a posse. They head to the stoplight and wait for the signal so they can cross over. 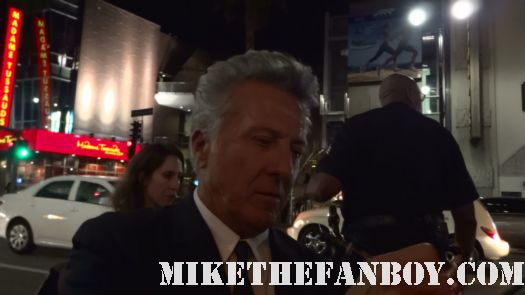 Dustin comes over and tons of pros come out of nowhere. Our single file line is now three people deep and I’m getting buried. (What else is new?) 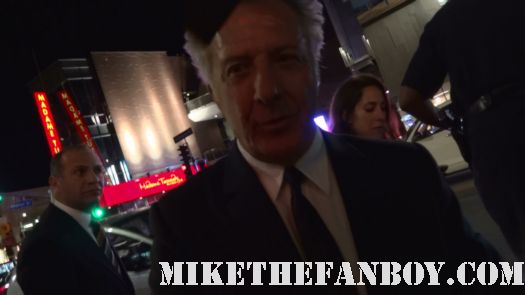 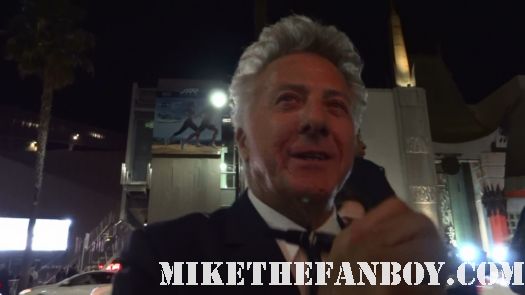 Dustin starts to sign and his publicist gets freaked out that it’s a blue pen. She keeps asking for a black so I give her mine. 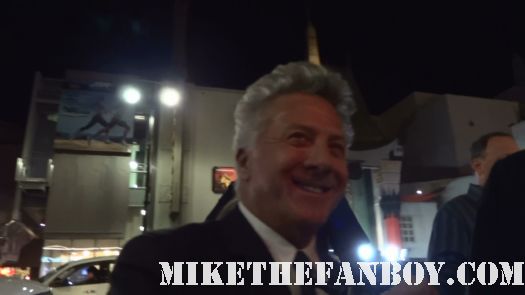 She talks to Dustin like a child and makes him switch. Ah, the legend of the blue Sharpie lives on! 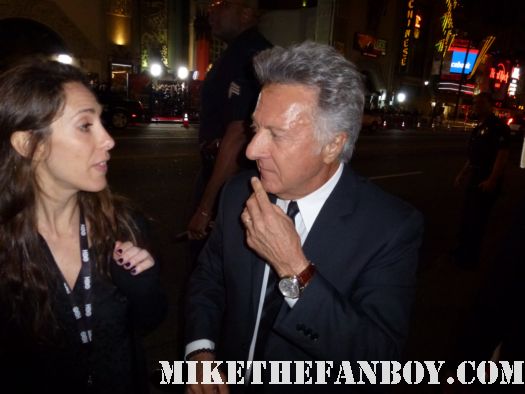 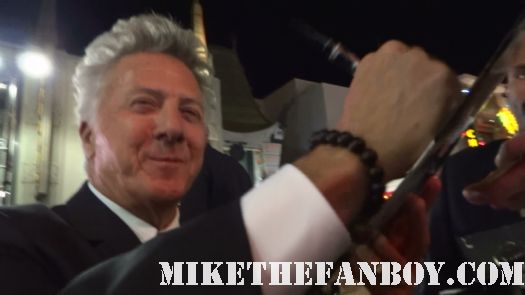 Dustin is making his way down the line and since he’s signing everything, it’s going a little slow. He digs me out of the pile and looks me in the eye and says “Hi. How ya doing?” as he signs my Luck poster. So nice! 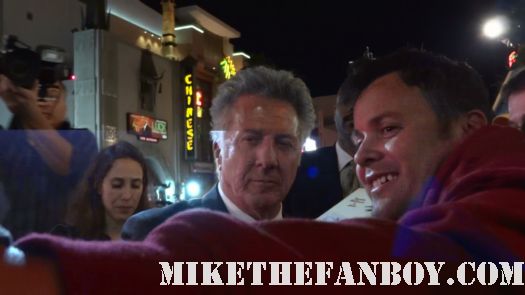 He gets to CB and Scotty who both get pictures with him. 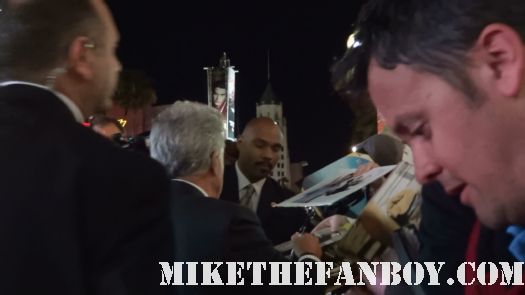 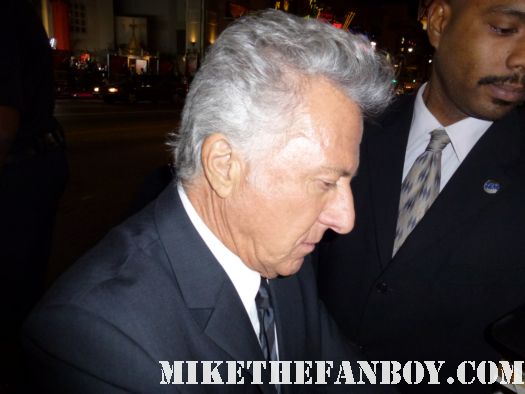 Yeah! It’s not much further until Dustin gets pulled off the line and heads over to the carpet. And that’s it for arrivals!

Since we didn’t see Ian, we decide to wait for the screening to end to see if we can spot him leaving. While we grab a bite to eat, we see Nick Nolte and Dennis Farina leaving early. Neither is interested in signing and they walk right on by the few folks who are reaching out to them. Yikes!

As we set up for the show to end, I hear that Ian Hart is somewhere in the house! Yeah!! Unfortunately no one knows what he’s wearing so this is going to be tough to spot him as thousands of people leave the theatre at once.

The first wave of people start to leave and it’s hard to see anything. Jason Gedrick is in the crowd and he obliging comes over and signs for us. Alan Rosenberg, who’s more of a guest star, is really nice and signs for all.

As we watch the waves of people go by, we see Jill Hennessy again, waiting for the traffic signal to change. We call her over and she’s so relaxed. 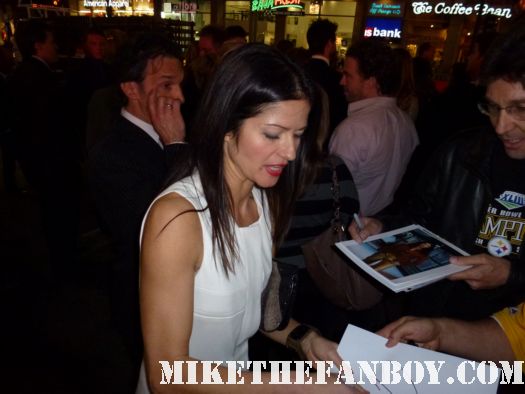 She’s signing for us all (unfortunately right over Dustin on my poster!) and takes it in stride when someone compliments her on CSI. She replies back “I was never in that, but thanks anyway!” Too funny! 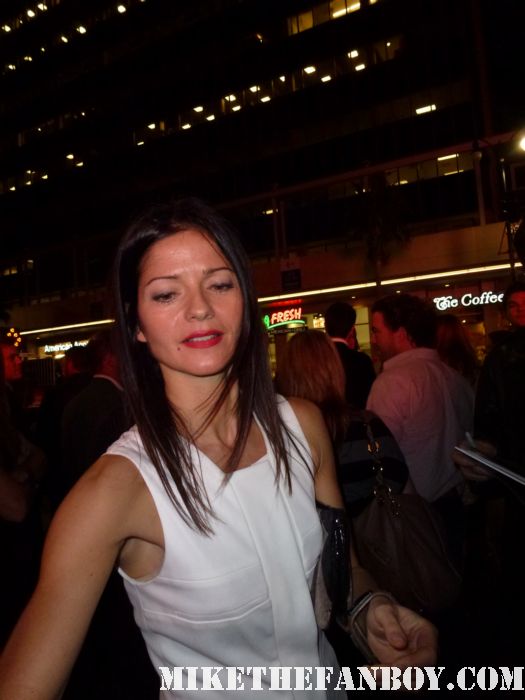 Thomas Jane walks by and I hear that Rex Lee (Entourage) is also around. Later on I find out that Kit Harington (Jon Snow in Game of Thrones) also attended the premiere, but I didn’t see him. Thankfully I did get to meet him before and he was as nice as can be.

By now, a good portion of the crowd has left and I’m starting to think we missed Ian. Drat! Scotty is a big Harry Potter fan so he’s trying to search him out, but he hasn’t seen him either. I Google Ian to find a recent picture and show it to Scotty. It’s a picture of Ian in character for Luck so he’s still wearing a hat. Scotty takes one look and says: “Well, I guess he could be that guy over there.”

I take one look and it is indeed Ian! Ah!!

I call out a rather panicked sounding “Ian!!” He looks a bit startled, but heads over to us just as the traffic signal turns green. Uh oh! We are now racing the light!

Ian hurries over and signs for a few people and is almost ready to head out and catch the traffic light. Arg! 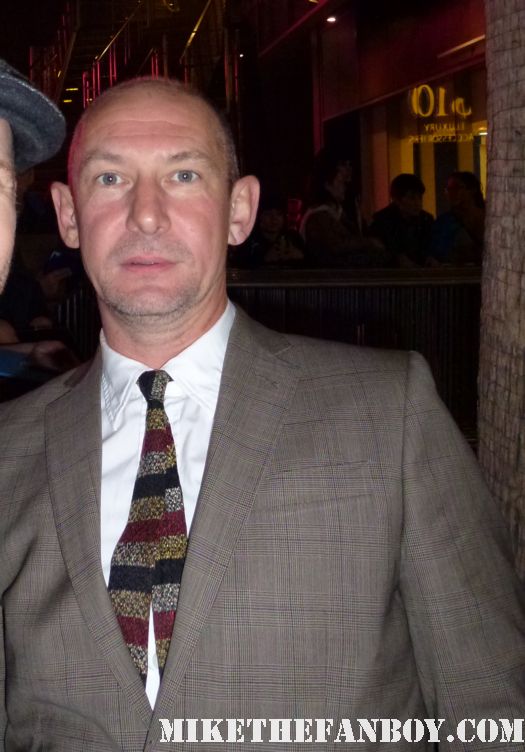 CB points out that I’m the nut waiting for him and Ian turns around and heads over to me. He signs my diary (yeah!!) and also signs my Luck poster. I tell him that I came out tonight just for him and he smiles. Scotty gets a very quick picture with him and the Ian is off and makes the traffic light. Whew!!

Thank God I got the picture loaded up on my phone just in time for Scotty to spot him! Thank God Ian was such a nice and quick guy!

By now the theatre is pretty empty and the stream of people has thinned out. There is still a crowd of people hoping for Dustin to leave. After a few more minutes of waiting, we finally see Dustin leave – the last person of course! He looks pretty mellow and is sort of cuddling with his wife. It’s really not a moment for fans to interrupt so, for the first time ever, he doesn’t sign for the crowd.

Fortunately our little group did get him earlier and thankfully I got Ian Hart. A successful night all in all! 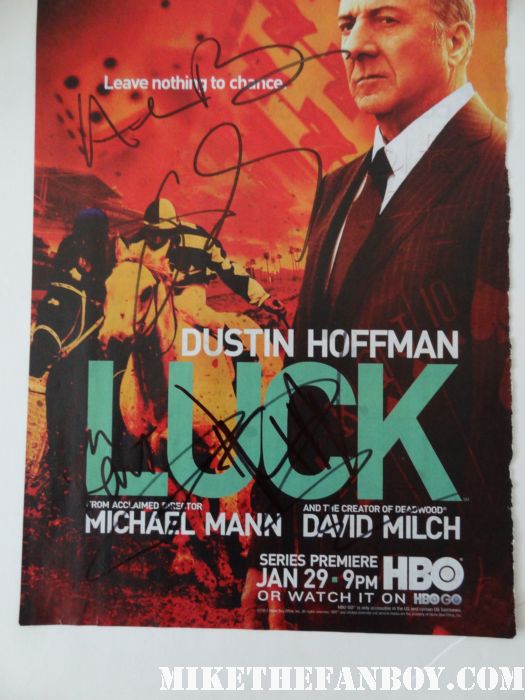 Luck airs on HBO on Sundays. (I enjoyed the pilot, but got lost in a lot of the horse racing talk. Hopefully that’s going to be less critical to the show as it grows. )