So how’s your holiday shopping going?  Need a few suggestions? Here’s a little something for everyone!

If you’re struggling to figure out some great gifts for the holidays, books are always a great option. It’s always a challenge finding the right book for the right person, so here are some ideas.  These books are some of my favorites that I read this year, but note that some were published before this year. Ergo, you may need to check bookshelves to see if your giftee already has it! But older books need love too!

For the Harry Potter and/or Game of Thrones fan

Wizards, magic, power plays for the throne and a school for magic (sort of).  There are strong influences from both Harry Potter and A Song of Ice and Fire (aka Game of Thrones) here, but it still manages to be its own story. This Young Adult (YA) series has plenty of breadth and scope as it follows two main characters: Han, the scrappy boy from the streets, and Raisa, the young princess about to take the throne. I devoured this series in about a week. The good news is the author is returning to this world with a new series set years after this one.  The Shattered Realms series will begin with Flamecaster which comes out in April next year so you can pre-order the new one. 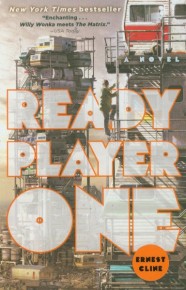 Ready Player One by Ernest Cline

This book has been out for some time, but I just picked it up this year and I loved it! In this world, work, life and just about  everything takes place inside a virtual reality environment called the OASIS.  When one of the OASIS creators dies, he leaves all his worldly possessions to the person who can solve his scavenger hunt in the OASIS.  The clues and the puzzles center around the creator’s obsession with the 80’s. So much fun!  Also, Steven Spielberg is about to make a film out of this and I can’t wait to see how they actually film the ending on this one…

For The Hunger Games fan who may or may not care about Peeta vs. Gale 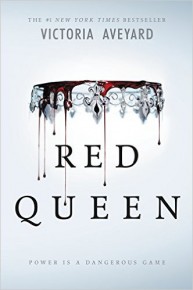 One of the most talked about debuts this year, this is an original take on the whole dystopian world genre.  In Red Queen, people are separated by the color of their blood. Silvers have superpowers and rule society while the reds serve.  Then Mare Barrows, a red, discovers she has extra abilities and, well, the world gets turned upside down. Expect court intrigue, violence and a little revolution.  While there are romantic candidates for Mare, her love life isn’t the focus of the story. If your giftee has already read Red Queen, you can pre-order the next book, Glass Sword, which is out in February. Quite a few books on this list have been optioned for a film, but it isn’t likely that they will all be coming soon to a theater near you.  Red Queen has Elizabeth Banks attached as director, so this one is a little more likely make it to the big screen.

If you dislike cliffhangers, then you may want to look into this series since its already completed. Legend takes place after something has basically destroyed the US so that some of the western states are now a republic. A young military prodigy, June, pursues a criminal, Day, who is accused of murdering her brother. (The author was inspired by Javert’s pursuit of Valjean in Les Miserables.) June discovers that the country that she’s dedicated her life to isn’t all that it seems. This series alternates the story from June and Day’s perspective so it’s nice to get both sides of this story. 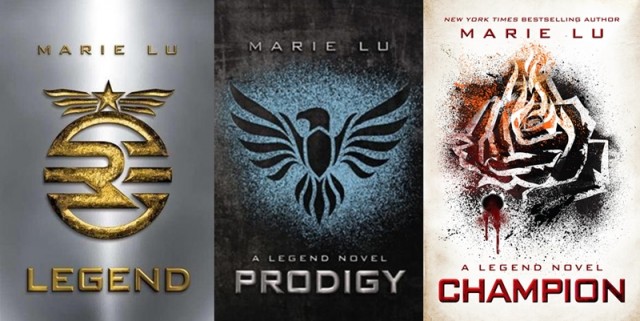 These books are really what Once Upon A Time should be, but in space.  The first book, Cinder, takes Cinderella’s story and sets it in this unique world where the moon’s residents have mind-control powers and Cinderella is a cyborg mechanic. The moon’s Empress Levana wants to take control of the earth and a ragtag bunch of characters have to band together to stop her.  Enter Scarlet (aka Red Riding Hood), Cress (Rapunzel) and Winter (Snow White). Yeah, it sounds like the weirdest concept, but it actually works since the tone of the books is just fun and the characters are seamlessly weaved into the story. If your intended recipient has already read these books, you can pre-order Stars Above, a short story collection coming out next year.

For someone who needs a good laugh 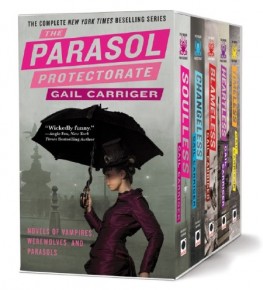 The Novel Strumpet has been raving about these books for a while and I finally (finally!) got the chance to read the first one…and then finished the rest that week. The books are just what Jane Austen would write if she wrote steampunk with vampires and werewolves. Alexia Tarabotti is soulless which means her touch can neutralize vampires and werewolves who seem to be mixing things up in Victorian England. Just pure fun, really. If your giftee has already read these books, Gail has a YA series called Finishing School which just completed with a new book last month.  I haven’t started that yet, but The Novel Strumpet assures me that its great.

For the person who likes stories about people (no monsters or aliens, etc…) 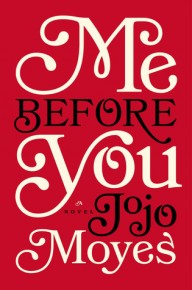 Me Before You by Jojo Moyes

For the people who just like stories a little less fantastical, here’s a book that’s been around a while.  (A sequel called After You just came out this year). A young woman named Lou gets a new job as a caretaker/companion for Will who’s been depressed ever since his motorcycle accident. It’s going to take all her patience and optimism to break him out of his pain and gloom. (Make sure you have a box of tissues for this one.)

The movie version will be hitting the big screen in March with Emilia Clarke as Lou, Sam Clafin as Will, Charles Dance as Will’s father and Matthew Lewis as Lou’s boyfriend Patrick. 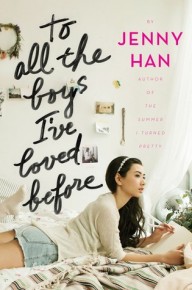 Sometimes, you just want to read a fun, first-love love story. When Lara Jean has a crush on a boy, she writes him a love letter that she immediately buries under her bed as a way of excising her feelings.  One day, she discovers those secret letters have all been mailed to the boys. Doh! The two books in the series are just light, fun reads with some adorable characters. It’s nice to see an Asian main characters where their ethnicity is part of who they are, but doesn’t define them.

Since I have a To Be Read pile that seems to be taking over my bookshelves, I know there are a lot of great books that I haven’t gotten to yet.  Here are some highly recommended titles that are staring mournfully back at me from my bookshelves (I swear I will get to them soon!):

Still don’t know what to buy? Want to sample some books? Want some signed stuff?

I’m giving away a stack of book samplers which are a nice way of figuring out whether the book or the author is right for you. Each sampler has a few chapters so you get an idea of the what the book is about and if you like the writer’s style. A lot of these books are currently available and two of the samplers for some highly anticipated new books which aren’t out yet: 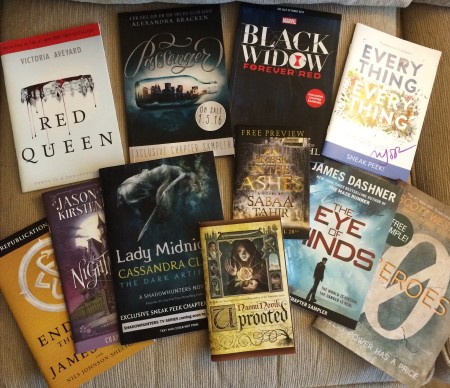 Oh, and the top row of samplers are all signed!  Yes, this means this prize pack includes signed stuff from Victoria Aveyard, Alexandra Bracken, Margaret Stohl and Nicola Yoon! 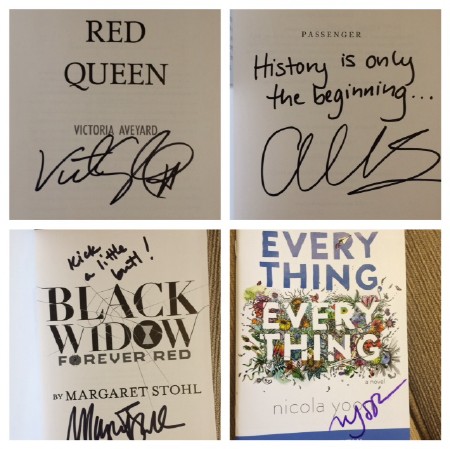 For this week-long giveaway, just fill in the form below. In the comments section, let me know what was your favorite book you read this year and/or if you have book recommendations. This giveaway is open to US residents only and you can tweet daily if you want extra entries.