During Awards Season, there are so many films to see that it’s practically impossible to experience them all like one would want to. So many get overlooked that are deserving of a chance. Often times this has nothing to do with the quality of the film, but the ability of the studio or production company to campaign for the film, stars availably, etc… It’s sad then to see great films not get the awards recognition that they deserve.

Such is the case with Hostiles, out now on 4K High Definition Blu-ray. It’s an exquisite film that hopefully will get it’s just due on the small screen. The film opens with a highly graphic sequence in which a man’s family is slaughtered by a horde of Comanche warriors. He and many of his children fall victim to the attack. After this, we see an American Indian family, rounded up by Captain Joseph Blocker (Christian Bale) in a cavalier manner.

Blocker is on the verge of retirement and is given one final duty. He must escort an elderly chief who goes by the name Yellow Hawk (Wes Studi) back to Montana. Yellow Hawk is dying of cancer and he’s been granted the journey to die peacefully after being imprisoned in New Mexico. 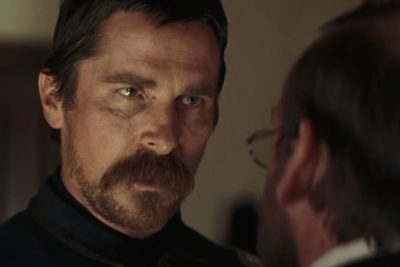 Blocker, on his way to Montana comes across the scene of the slaughter we witnessed open the film. They find the slaughtered man’s wife, Rosalee Quaid (Rosamund Pike) still holding on to the dead remains of her infant. She is trying to keep everything quiet for her “sleeping” children (who are of course deceased) as Blocker sees the burnt out remains of the property.

This sets up the film which is reality is a story about anger and giving it up. Blocker is an internally angry man, something that Christian Bale has made a career of playing. He’s a lit fuse away from popping and as he tells his friend in the beginning of the film, he’s been fighting for years and is scared on the outside as well as the inside. If he retires, he can claim a decent pension and try to let things go.

The story allows the characters to see beyond the stereotypes they’ve built up in their minds and the prejudices that they have after years of war and fighting. Yellow Hawk and Blocker have a history that’s not good, and Blocker was forced to go on this journey. It’s a typical theme in a way that winds the audience on a crooked road that I found extremely interesting. It could have been a formulaic western, but instead we get this character journey.

Christian Bale is wonderful in the lead role and it’s a shame he was overlooked during the aforementioned Awards Season because in any other year he would have had a nomination. This role was tailer made for him and he does an awesome job in it. Equally interesting is Wes Studi, who as a man seeing his mortality coming to close, he’s resigned to what’s going to happen but resilient to the end. It’s a great role and he brings so much dimension and dignity to the part.

Hostiles arrives on 4K High Definition Blu-ray in a stunning transfer. The landscapes look wonderful with an incredible depth showcasing the sprawling western front. The picture is crystal clear and if you’re a fan of the genre you’ll love seeing the West in this way. The fine details are excellent, here you can see the threads and fibers in the clothes and seeing a film in this way, allows the viewer to catch every nuance in the actor’s faces and in turn enhances their performances.

Special features on this release of which there is only one:

A Journey of the Soul: The Making of Hostiles – This is a great behind the scenes documentary told in multiple parts. The total running time is about an hour. It features interviews and a healthy amount of production detail as well.

Overall, I’m glad I was able to experience this film which I might have missed. The performances are riveting and the cinematography excellent. It’s an amazing performance by Christian Bale, which is worth seeing the film for alone. However, every aspect of the movie is well done and here’s to hoping that it gets its just recognition on Blu-ray.

Hostiles is out now on 4K High Definition Blu-ray!