Home / Desperate Housewives • Fanboying! • Jack / Jack Has A Chance Encounter With The Lovely Marcia Cross and Gets To Meet Your Sister’s Sister Star Mark Duplass! Autographs! Photos and More!

You may remember Jack’s earlier report about meeting father of Charlie, Mr. Martin Sheen, well that wasn’t enough for one day! Jack headed out to a Q and A with The League star Mark Duplass! Now, I freely admit I’m not super familiar with his work, however I know a lot of people are.

Jack had a great experience with him at a Q and A for Your Sister’s Sister which I hear is amazing. I can’t wait to see it!

Plus, Jack had a chance encounter with the amazingness that is Ms. Marcia Cross! Hello! How jealous am I?

Check out Jack’s full report after the jump!

Days like today are why I love living in Los Angeles. Earlier today I met Martin Sheen at a book signing and if that wasn’t enough I met another one of my favorite actors, Mark Duplass. For those unfamiliar with his work, he is best known for his work in Mumblecore movies like The Puffy Chair, Baghead and Humpday, co-directing/co-writing Cyrus, and starring as “Pete” in FX’s The League.

Duplass’ career as an actor/writer/director continues to flourish with recent films like Jeff, Who Lives At Home, Safety Not Guaranteed and Your Sister’s Sister. The later of the bunch is why I’m writing this article. Unlike most filmmakers today, Mark is always out promoting his films and you can often find him doing dozens of quality Q&A’s each year. He is always out and about it seems.

Fortunately for me, it didn’t take much to convince my ladyfriend that an evening with Mark Duplass, The Landmark and The Westside Tavern would be a great date night. Sure enough, we were both blown away. Ever since the Landmark Theater parking structure started charging for parking in West L.A., life has become easier attending events there. Still I think the parking garage is horribly designed, especially if you don’t own a compact car.   So we arrived about 20 minutes early and as we are heading up the escalators from the parking garage we bump into Paul Dano (There Will Be Blood, Little Miss Sunshine, etc.) with his date. This was a great sign for me. Every single time I obtained an autograph at the Landmark I randomly bumped into a celeb before a Q & A screening, so I was stoked. After we picked up our tickets, my date had to use the bathroom.

While waiting for her to return I started playing with my phone for several minutes when a redhead comes into my peripherals. For a moment I think it’s my date so I look up, but it’s actually Marcia Cross. If Mike was here I know he would have had a Desperate Housewives fanboy moment. Why is it every time I visit the Landmark I bump into a popular TV actor like Teri Hatcher, Sandra Oh, Patrick Dempsey and now Marcia Cross? So when my date returns, the first thing she says to me, “You aren’t going to guess who I was washing my hands next to in the women’s bathroom?”

“Marcia Cross literally just walked by and went into the Intouchables. Not too bad for a Saturday night?”

Bumping into two random celebs before the movie gave me a gut feeling it was going to be a good night. We settled into our seats to a sold-out screening of Your Sister’s Sister and I was really impressed with everyone’s performances, particularly Rosemarie Dewitt and Emily Blunt’s chemistry as sisters. Duplass played the perfect role and Your Sister’s Sister is one of the summer’s best surprises. Once the movie finished, about half the audience trickled out of the theater despite the announcement of the Q&A preceding the film. However, considering the majority of the audience was 45 to 70 years old, it’s not surprising. My date and I were one of the very few twentysomethings in the audience, let alone a couple under the age of 35.

Mark showed up in a very casual sweatshirt and was super down to earth just like his character “Pete” on The League. It seemed like most of the audience was unfamiliar with Duplass’ entire body of work, which is awesome that he is getting greater exposure, however he still received some interesting questions, especially in regards to his collaboration with Kathryn Bigelow’s Osama Bin Laden project. After the Q &A, Mark casually stayed around and was greeted by a few admirers from the audience who wanted to congratulate him on the film. My date and I were some of the first people to meet him, even though we took our time walking towards the front (sat in the middle of the theater). 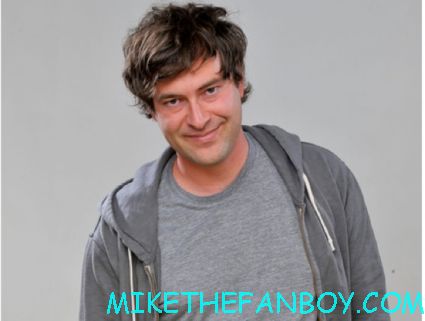 After a theater patron was done talking to him I politely asked him to sign my copy of The Puffy Chair where I decided to pull a total fanboy moment. I started gushing about his whole body of work including being excited Jeff, Who Lives At Home was about to be released on Tuesday (June 19th), The Do-Deca Pentathlon screening at LA Film Festival and how it’s playing at the Cinefamily for an entire week. 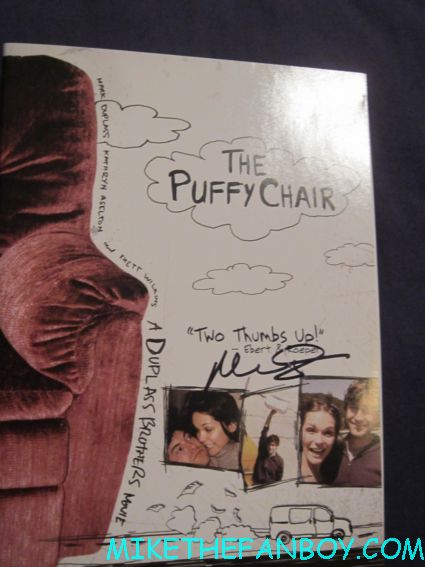 Then I also rambled on about The League and his other films, which impressed him as he signed my copy of The League Season 1 as well. He casually remarked, “Wow, you’re really on top of my films and have been really following my career. Thanks for the support” and seemed genuinely impressed.   My date and I both shook hands with him before heading downstairs to the Westside Tavern. Even as we walked out, my date said, “He really was taken back. You definitely impressed him and were probably one of the only ‘fans’ of his in the theater tonight. That’s so cool” 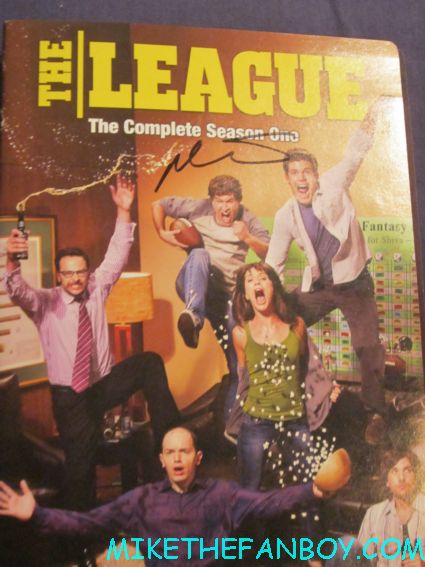 Besides a great date night with my ladyfriend, the day turned out great with all the celebs I saw. Mark Duplass is seriously one of the nicest filmmakers I have ever met and will always be a huge fan of his. If you aren’t familiar with his body of work, go and discover this great entertainer now before he becomes a household name. Until then, happy autograph hunting! 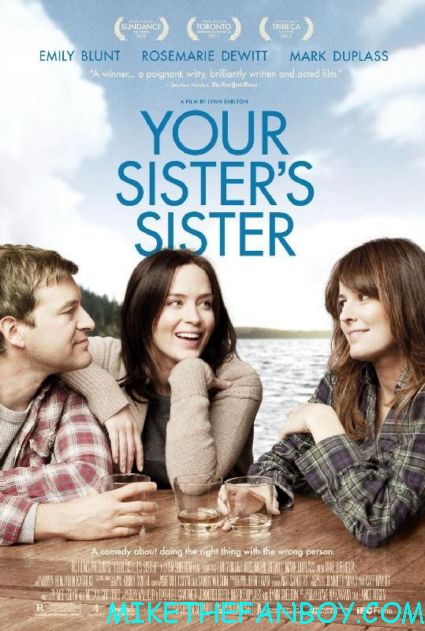