I have no idea why I was thinking about 9 to 5 today, but I was. And when you think of 9 to 5 one can’t help but think of the stars of the film. Jane Fonda is a film icon, I know a lot of people have mixed feelings about her, but no matter what someone thinks, I’m glad everyone has the right to speak their mind.

I was fortunate enough to meet Jane Fonda and while she wasn’t full of sunshine and rainbows, she was very cordial.

I’m running around today, and I wasn’t… planning on getting around, but a last minute call prompted me to head out. It takes so much for me to run out the door to Get Around, lol… Ah well… Today none other than screen legend Jane Fonda is doing a rare television talk show appearance and I need her to start my 9 to 5 original soundtrack LP. I’m hoping this won’t be long as I have to get home and get a bunch of things done, so I guess we shall see.

4:33 p.m. – We just arrived. There are a couple other collectors’ here, but no sign of Jane. In fact the whole scene looks a bit barren. Ah well… Sigh…

4:37 p.m. – I’m with a friend and he wants to take off, but I am insisting on waiting. We’re already here, and you just never know right? Getting around may consist of a lot of waiting around, but it all works out in the end.

4:45 p.m. – The other collector’s have photos mainly. I’ve never gotten Jane before, and I hear she can be difficult to say the least. So, you just don’t know. She is a legend!

4:49 p.m. – It is a gorgeous day I have to say. And the nice thing is that there isn’t a lot of pushing and shoving, it’s all quite civil. It just makes the time go by so much better!

5:03 p.m. – We just found out some information that she’s not here yet, but should be shortly. Fingers crossed! 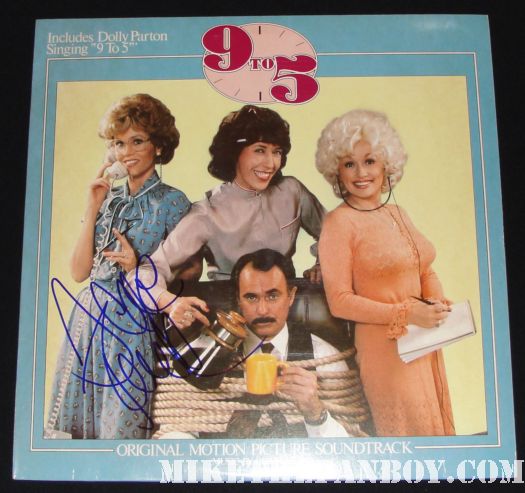 5:08 p.m. – Oh… here’s a car… yep, it’s Jane! We can see her through the window. She’s holding her dog in her lap. She is walking by and the few of us ask her to sign, she stops to look at her watch and asks what time it is. Someone said it was almost 10 after… she comes over and signs a couple in black sharpie, and then switches to blue. 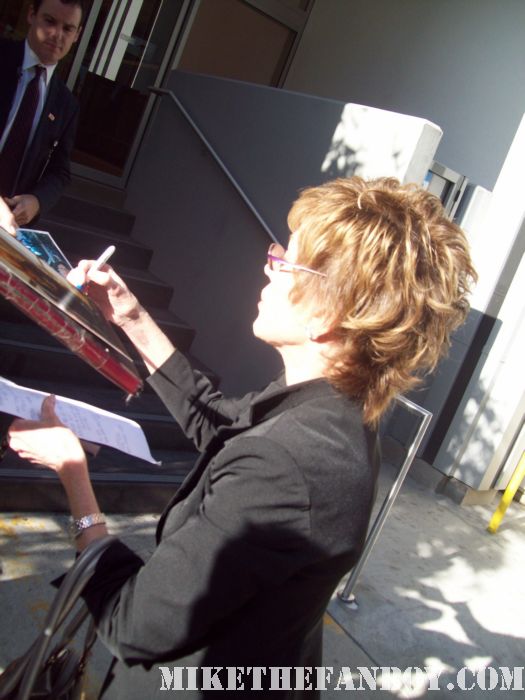 She looks at my LP and says, “I have to make sure I don’t sign on Dolly’s boobs.” Lol… she only did one each but that was fine. Everyone got one, and then Jane disappeared inside. It was actually quite a nice experience, and it was super easy. Just like I like it! 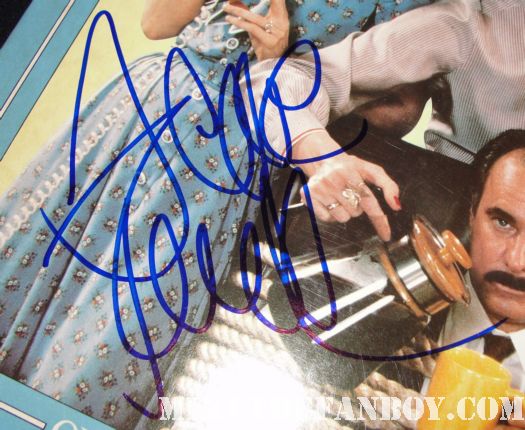 Also, a fun fact…did you know that Jane Fonda is one of the celebrities with the most plasticsurgery? Who can blame her after being in the spotlight for so long? We can’t deny that she looks young and fabulous!

She’s certainly someone many people admire for all her hard work and past roles and for the fact that she is so stunning and attractive, even as she ages. I think we can all benefit from following in her footsteps and taking a few tips from her playbook when it comes to her career and appearance.