Who doesn’t love John Wick? You have a chance to win a meet in greet with John Wick composer Tyler Bates! On top of all that, you get to collect John Wick related items along the hunt! It’s a win/win! 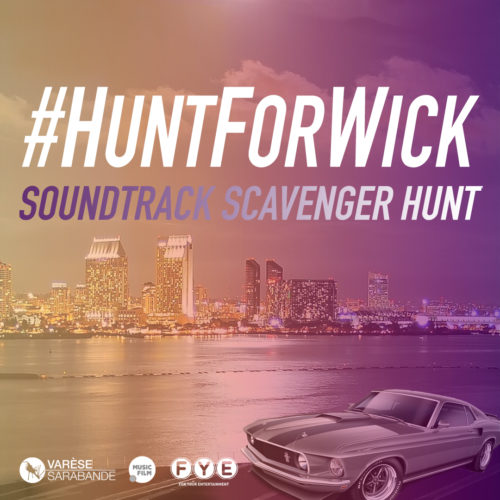 The #HuntforWick Soundtrack Scavenger Hunt brought to you by Varèse Sarabande Records, Music.Film Recordings, and FYE has released all details for Comic-Con 2019.  Participants must collect three John Wick related items at three newly announced locations within and outside of the convention center, and then post a photo of themselves holding the three items with the hashtag #HuntForWick. Once this has been done, a winner will be selected to win a grand prize, a meet & greet with composer Tyler Bates, a signed John Wick vinyl and sheet music.  The hunt starts tomorrow, Thursday July 18th.  Happy hunting!

WHAT: John Wick Soundtrack Scavenger Hunt
BY: Varèse Sarabande Records, Music.Film Recordings and Composer Tyler Bates
WHEN: July 18th/19th, 2019
Like a plot line right out of John Wick Chapter 3: Parabellum, John Wick has been spotted in San Diego and it’s up to you to catch him and claim your bounty.  Visit three different locations inside and around the convention center on July 18th say the phrase “I’m Hunting for Wick”, and collect a John Wick related item from each location. Post a photo with yourself and all three items on social media using the hashtag #HuntForWick and a random winner will be selected to receive the grand prize on July 19th, which is a meet and greet with the franchise composer Tyler Bates!  The winner will have the opportunity to ask Tyler any questions they have about the film and will receive a signed John Wick vinyl and sheet music.  Follow @varesesarabande on Twitter and Instagram for ongoing details.
Location #1: FYE Pop-Up Shop in Horton Plaza
Location #2: Dumbrella Booth #1335 inside the Convention Center
Location #3: Funimation Booth #4135 inside the Convention Center
Share on Facebook