Home / Ace • Hall Of Shame • TTM Tuesday! / TTM Bonus! Be Careful How You Reject Your Fans… It Could Come To Bite You In The Arse! I’m Talking To You Kevin Garnett! Get Signing!

Ace just wrote in this awesome little article that I had to share. I love the graphing turn of events!

He explains it really well, but I’m going to say this, when turning someone down for anything perhaps you shouldn’t reference something that could possibly happen.

I like to use, “well hell freezes over,” “when Natalie Portman picks up a pen,” “When Molly Ringwald dishes out hugs,” things that will never ever happen.

I mean if you think about it, all of those things seem far fetched… Killing Osama bin Laden… That could happen!

What’s up autograph fanatics! Ace here with a brief photo to share with you!

It has been over two years that U.S. Navy Seals dropped into the Abbotabad Compound of Osama bin Laden. This event caught the breath of everyone watching the news in the United States, and is considered one of the most triumph victories of U.S. anti-terrorism efforts. May 2, 2011: Osama bin Laden was killed… While we try to do rather light subjects over here at Mikethefanboy.com, we could not refuse to show this autograph turn of events.

Around two years ago, a very famous basketball player named Kevin Garnett denied a young boy an autograph request. The funny thing in all this is that he referenced Osama bin Laden to deny the boy’s request. 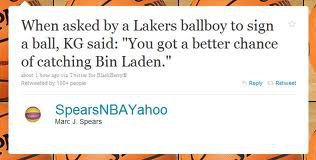 Now, on any day this man would receive a ANGRY THEO award, and granted he should… He deserves it rightfully!

But, I think the boy deserves his graph… Don’t you?!? Lol. I know this is an oddball article but I hope you enjoyed it.