Home / FANBOY FAIL! • Fanboying! / Fanboy Fail! Use The Force And Don’t Be A Jerk LUKE! Mark Hamill Pretends He Is A Jedi Trying To Escape Five Fans! Doh!

Luke.. I am your father…

Or a distant cousin at this point, who knows.

After trudging through the Star Wars prequels, the “star wars” brand has taken a bit of a beating. Still, the original three films are classics and will always be near and dear to my heart.

Luke Skywalker himself, Mr. Mark Hamill was doing a rare q and a and I figured… There might not be a lot of people there. I know Mark Hamill charges a lot at conventions and I hear he’s usually not very nice, so who knows.

Big Mike, Scotty, Suddenly Susan and a couple other collectors were on the scene. Seriously, there was only like six people here. Not bad. 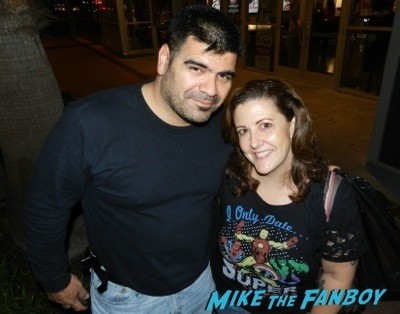 We waited for a bit, and everyone went inside. We didn’t see anyone, Robert Carradine also here and I didn’t see him either.

We checked the back, we stayed on the side, Nadda. It was like he took a landspeeder into the theater and disappeared. Grumble.

There was a club on the other side of the street that’s really hopping and for some reason we’re all obsessed with singing Wilson Phillips.

Hold on for one more day…

Susan, was looking at the theater marquee, and now we’re coming up with random play names. My favorite is The Vanguard Players in Dinner and a Circle Jerk. I’d pay 10 bucks to see that.

See, you get a little slap happy pacing back and forth in front of a movie theater.

Big Mike and I trying to figure out what’s going on, but no one seems to know. 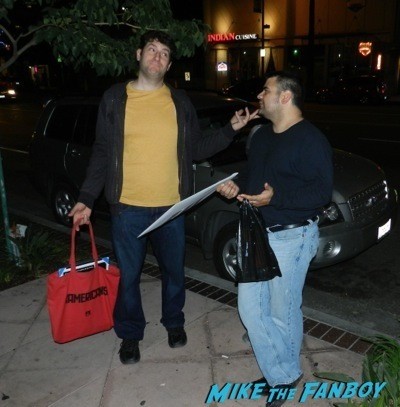 The q and a is over and still no Mark Hamill . We saw Robert Carradine leave, no Mark.

Finally, he tried to sneak out the back. One collector was there and he asked Mark if he could sign really fast, and Mark bolted to his car, ignoring him. He turned the corner as his wife said well that was a great escape.”

Really, an escape from the six of us?