I have to tell you, I have a long and storied history with Donnie Darko. The first time I saw the movie, I saw that damn bunny in every nook and cranny in my apartment. It scared the living shit out of me. My friend Teresa kept saying, “AYE! It’s the Bunny!” and dammit… I would look over and for a brief second… I’d see the damn bunny. It was like the single frame of Brad Pitt that was in the beginning of Fight Club. I couldn’t sleep with the closet door open, it was that bad.

So, to get over my fear of this bunny (And really it has nothing to do with Buffy The Vampire Slayer) I tried to dissect Donnie Darko. I broke the whole film down, watched the director’s cut, the commentary, I was on a mission. What I learned ultimately was… nothing. The film actually breaks down once you try and piece it all together. BUT it’s still a fabulous exercise in indie filmmaking and one of the best roles of Jake Gyllenhaal’s career.

I find that with a lot of Richard Kelly’s work. I like it, and then try and find the through line and narrative and then… sadly it breaks down.

It didn’t stop me from finishing a cast signed one sheet poster, but…

I’ve rambled enough, check out Jacks’ recap below because clearly with Richard Kelly, I can go on a tangent! 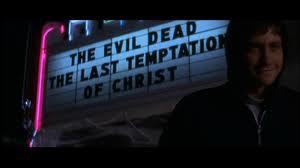 Considering “Prisoners” is coming out this weekend I decided to revisit another Jake Gyllenhaal film, “Donnie Darko.” Let me be honest I didn’t like this movie at first. When this film came out I was still in middle school and caught the film when it first premiered on Cable TV/HBO. I found it to be extremely strange, but then all of a SUDDEN it became a total “hipster” film before that term even existed. It’s one of those films where almost every clique knew about the film and that are when I decided to revaluate my opinion about it. 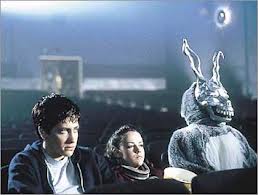 One day a teenager named Donnie Darko (Gyllenhaal) is woken by a guy standing outside his room in a scary rabbit costume, who introduces himself as “Frank” and tells Donnie told the world will end in 28 days. When Donnie returns home, a jet engine has crashed into Donnie’s bedroom and is informed by his sister Elizabeth (Maggie Gyllenhaal) that the FAA has no clue. 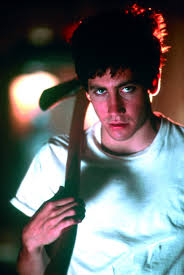 Donnie starts dating new student Gretchen Ross (Jena Malone) and seems to have found some real stability in his life. However, Donnie has been cast under a spell and can’t shake Frank’s influence, which results in Donnie doing crazy things around school. 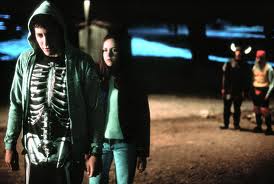 Honestly, describing this movie is really hard to do and the best way is to just experience the film. It’s a really bizarre movie and well worth watching if you’ve never seen it before. Not only does it have Maggie, Jake and Jena, but also Noah Wylie, Drew Barrymore, Seth Rogen, Patrick Swayze, Mary McDonnell, Katharine Ross and James Duval. 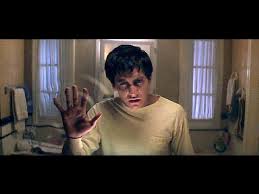 Around the time of the Director’s Cut DVD release, Richard Kelly was getting to release his film, “Southland Tales.” I was fortunate to attend a signing at the old Jay & Silent Bob’s Secret Stash when it still existed in Westwood where writer/director Richard Kelly and Kevin Smith were signing “Donnie Darko” DVDS (Kevin Smith did a special commentary track on the special edition) along with the “Southland Tales” comic book. Richard was extremely happy to meet fans and every time I have met him, he continues to be super chill discussing his various film projects. Until the next time, happy autograph hunting!