Billy is a huge fan of Parks and Recreation and also one of it’s stars Aubrey Plaza. So, when I saw she was participating in a celebrity game night, I was like… Oh Billy might like this! Sure enough he did! We headed out but of course I was stuck in traffic, why is it there’s ALWAYS horrible traffic in Los Angeles.

Anyway, It was a pretty fun night, but don’t just take my word for it… Check out Billy’s recap after the jump!

Welcome back to Billy Beer’s Barstool. I usually have a nice little into here, but we’re going to get straight to the point today. There was a poker game, with a lot of people in the bar, and it was Happy Hour ALL DAY!

I always love those “what are you doing today” calls from fellow fanboys on days that I’m not working. It usually means something good is going on. Today I found out about a celebrity poker game for charity, at a pretty laid back location. The last time I was there though I walked away with squat. But there were a few of names I’ve been trying to get for some time that I actually had stuff for. So I go through my unsigned pictures and posters find what I need, and I’m on my way. I’m supposed to meet the one and only Mike the Fanboy around 6:30, but he’s running a little late (stupid traffic).

When I get there, there are only a couple of graphers standing around. We chit chat for a few minutes. I express the fact my main goal is to get Aubrey Plaza. I am a huge fan of Parks and Rec, and love her character, and her comedy. The 2 other times I’ve met her, she’s been on the shy side/I really don’t want to do this side. While I’m standing there, one of the dealers is yelling my name. I’m sitting there waiting for limos, and he’s like “BILLY, if you want Aubrey, she just drove past you!” OOPS! So I go walking over there. We haven’t really tested the limits on the security, so I don’t really know how far I can walk up to her. I call out her name and ask her if I could have her sign a couple things, and that I’m a huge fan of the show. She was like “sure”. WOW this was way easier then I expect. She signed my cast photo… 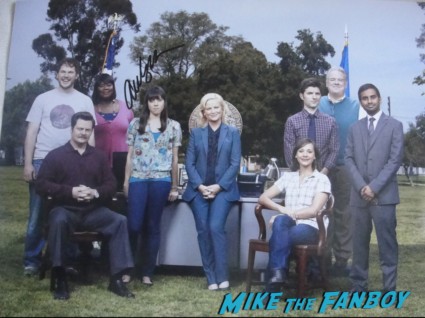 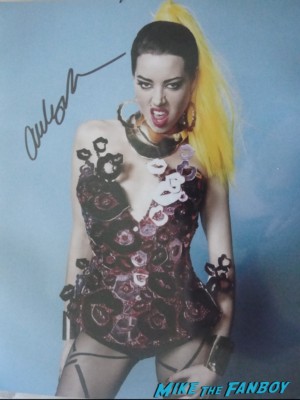 Actually taking the time to sign where you can see it. I ask to take a picture, and she also agrees. She is being SUPER nice. We take the picture, then I remember I had one more picture for her to sign, and she does that too. 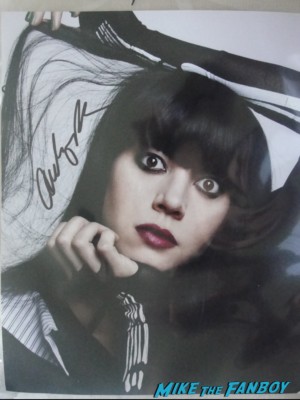 I wish all my meetings with people like could go this smoothly! 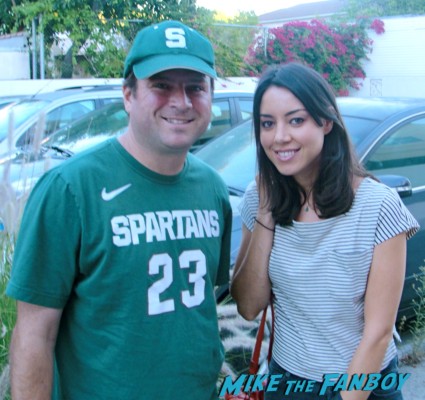 Next to arrive is Rich Sommer from Mad Men. I’ve been to a number of Mad Men events over the past year, and I’ve missed him every time. So let’s just say I had a few things for him (5, COUGH). He too is super cool. I only had him sign 4 different cast pieces I had. OK, next time he came out for a smoke, I got the 5th thing signed. I didn’t take any pictures of those posters, sorry.

Alright, 2 for 2. Here comes Jason Gann. The first person I’ve actually gotten already, but I still had some Wilfred posters left over from Comic Con. Every time I’ve seen him there, he’s been really nice, and today was more of the same. 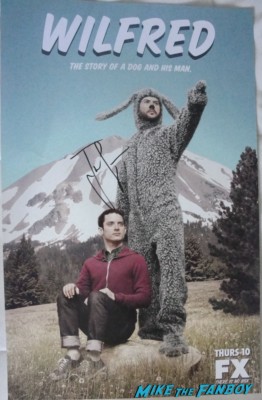 He signed both of my posters and took a picture with all of us. 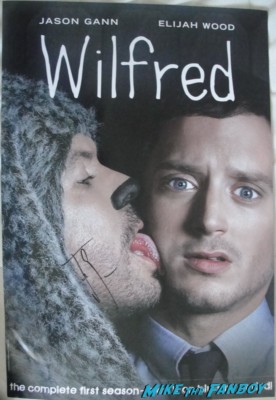 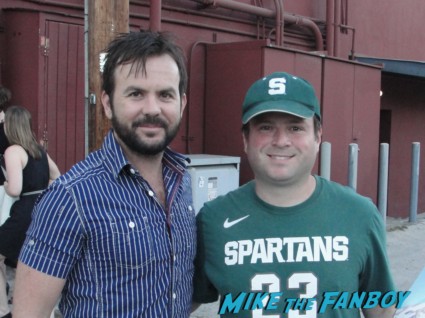 Next to arrive is Abigail Spencer. Not a huge name, but a very pretty and very nice one 🙂 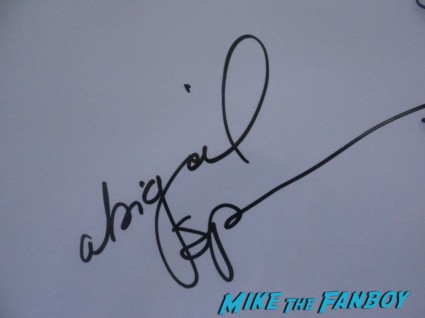 I brought blanks for the people I had nothing for which she was nice enough to sign, and then I got a picture with her. I’d say we look very cute together! 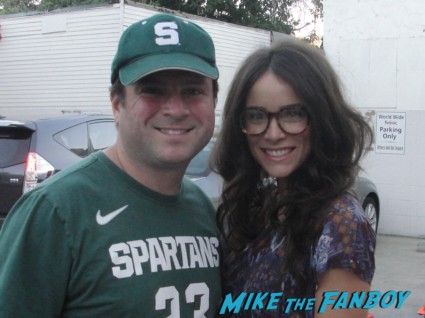 Next to arrive is Nathan Fillion. Where’s Mike the Fanboy????!!!!! I know this is one of the people he was hoping to get. Another person who was hoping to get him was my sister. For those of you who don’t know, I have a sister, Gail, who is a huge sci-fi fan. She saw a picture I had taken with him a while back and was excited I met him. I told her I would try getting him for her. He’s one of the nicest guys, but for some reason when I tried at the Spiderman Premiere, I missed him. We walk over to him, and he signs the picture I have for him. There you go Gail! I think she reads this. I can’t post a picture of this, because it’s a Christmas gift.

And of course the minute he walks in, who walks around the corner. Mike the Fanboy! Sorry Bro, just missed him. But it was perfect timing for another person he was trying to get. Katee Sackhoff just drove past us. We wait for her to get out of her car, and then she gets surrounded by pictures. I guess there’s a lot of Battlestar fans here today. I kinda stand back, because I know Mike has a cast piece he needs her on really bad. 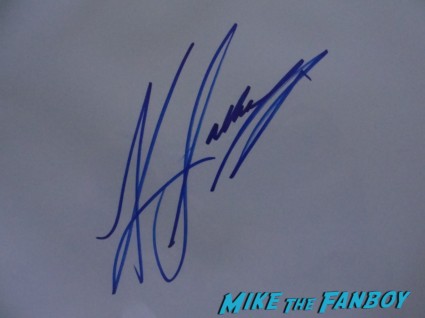 She goes through everyone, and then takes some pictures. Which of course I ask for too. 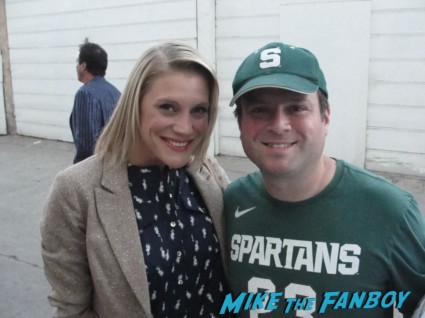 Little did I know after we took pictures TMZ was there to ask questions. Guess who was in the background! Yup!

Oh I forgot to mention that Michael Trucco another person Mike needed came in with Jason Gann, but I really didn’t know who he was, so I didn’t get him. But enough about people Mike was hoping to see, this is my fanboy story!

Here comes Alia Shawkat! Who? Only the daughter on Arrested Development! Only one of the greatest shows EVER! I have a cast piece I’ve been working on very slowly. 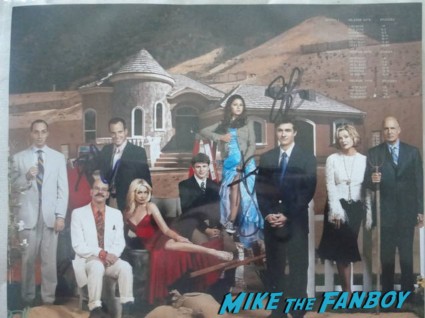 I am uber excited the show is coming back! She comes over and follows everyone else’s lead, and signs and takes pictures for me. 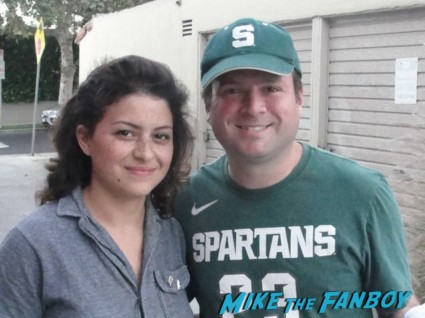 Pretty sure everyone is in now. The only people I missed were Busy Philipps who I have a picture for, Sarah Silverman, and Martin Starr. Even though everything I got would be enough to make a fanboy happy, I decide to stick around and keep Mike company. Both of us are getting on the hungry side, so we head down the street for some grub. When we get back, the graphers tell us we missed Sarah. Shoot!

After about a half hour, people are starting to stick their heads out for smoke breaks. Sarah starts being friendly with the graphers and signs a few. I really didn’t have anything for her to sign, so I just ask for a picture. You can see everyone else smoking in the background. 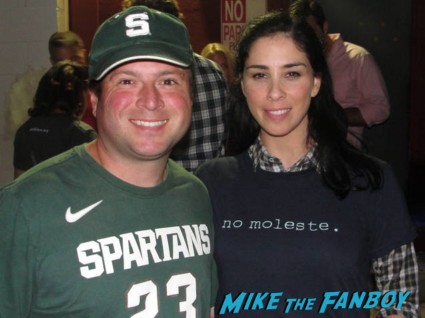 Busy is out there too. She’s been talking with people, so I didn’t want to interrupt. When it looks like they are going back in, I quickly move in and ask for her to sign. She as everyone else is way cool. She signs, and we talk about Cougar Town. I get a picture with her, and then she heads back in. 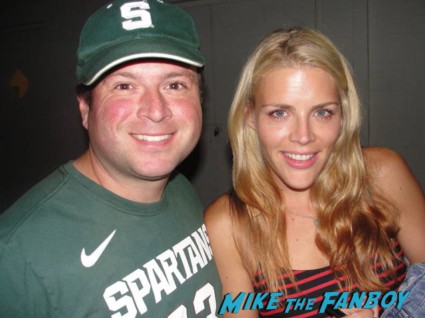 I’m finished! I got nothing else. Of course I made the mistake of calling Gail and asked her if she liked Battlestar. Of course, guess I have a little more waiting to do. Nathan and Michael both come out around the same time. Mike and I go for Michael, while everyone else goes for Nathan. This is supper easy. I have him sign a blank to my sister, and he even puts an xoxo on it. She’s going to love that. Now I’m just waiting for Katee. I see the door open and there she is. I didn’t even give her time to think. “can you sign this for my sister, she’s a really big fan!” She came right over, took her time signing, because I think she knew when she was done with me, it was off to the wolves. I thanked her, and then I was done! Off to the bar, it’s Sunday, it’s Happy Hour all day!