Melissa headed to Wizard World in Chicago and had an amazing time. She was able to meet a few of the awesome stars in attendance including Sebastian Stan and Shawn Ashmore.

I think Wizard World does a great job with their cons and I’ve always wanted to attend. Especially after reading recaps like Melissa’s below!

Check out her amazing recap below!

I had planned on going to Wizard World Chicago like I do every year, but this time around there were rumors that Sebastian Stan would be attending…and when those rumors proved to be true I went all in and bought the Sebastian Stan VIP Pass. This included a 4-day Con Pass, autograph and photo ops tickets for Sebastian (including a SpeedPass for each event), and guaranteed VIP seating at his panel with Anthony Mackie. After I purchased my ticket the only thing left to do was wait.…it felt like the longest month of my life. I’ve been a fan of Sebastian since my college days so FINALLY getting to meet him was such a treat.

My friends and I made the trek down to Rosemont on Saturday morning. 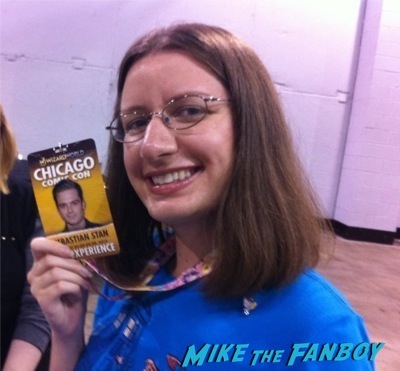 Two of my friends (Brandy and Katie) were doing the Sebastian VIP along with me while my other two friends (Kris and Jess) were doing the dual Sebastian and Anthony VIP pass. The first item on the agenda was a photo op with Sebastian. Since we got there fairly early we were numbers 2, 3, and 4 in the line. We spent our time chatting with our line mates…as well as making fun of the gaggle of teen girls who were attending SocialCon next door (a convention full of Social Media ‘sensations’ including Josh Peck and a French Bulldog). There was a bit of a delay with the start of the session as some girl passed out during her Matt Smith photo op and needed medical attention. After she was taken care of it was time! Photo ops are always over before you even realize it, but Sebastian did his best to make the experience memorable. He introduced himself and shook my hand before the picture was taken. While he was game for any pose (just check Tumblr…people ask for some strange stuff) we just did a standard pose with his arm around my back and mine around his middle. Man…is that boy built. He wasn’t as tall as I expected, but he was tan and handsome and warm and I probably could have stood there forever. On my way out he thanked me…as if he had to thank ME.

The photos were ready 45 minutes later…as promised. I must compliment the staff on making sure everything ran smoothly and on time. I was very pleased with the final product. 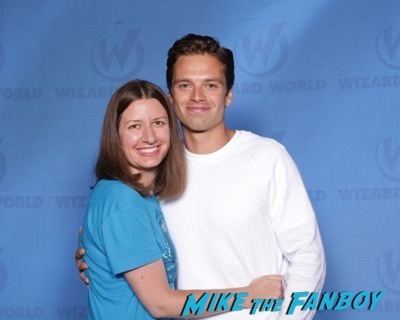 We had some time to kill before the autograph session so we wandered the floor for a while. The set up was different than years before…much more spread out, which made everything feel less congested. Since I had time I opted to meet Shawn Ashmore. 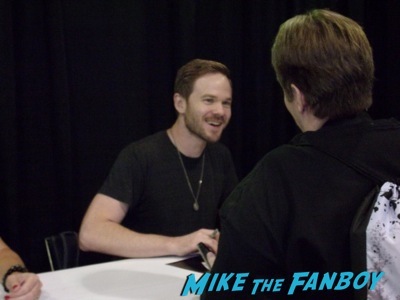 What a NICE guy. He really wanted to talk. The lady in front of me kept taking pictures of him while he signed for her and wouldn’t reply to any of his small talk. I thought that was kind of weird…and rude. When it was my turn we chatted about his day and my day and a few of the movies he’s been in (I absolutely loved him in Frozen). He signed a photo for me and was happy to pose for a photo. I thanked him and was on my way. 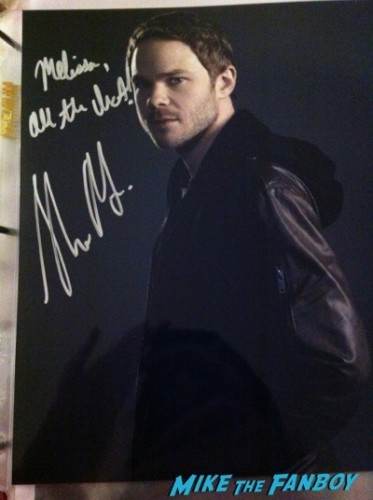 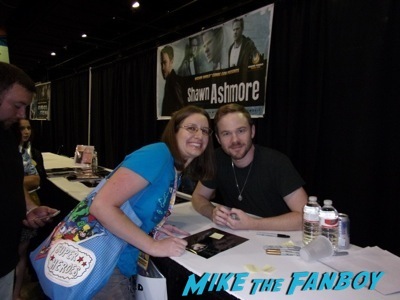 About an hour before the session was set to start we headed down to get in line. Jess and Kris were already there and only had complimentary things to say about their photo session with Anthony and Sebastian. We were expecting the session to start at 3pm, but both men showed up around 2pm. I think the handlers saw the size of the lines and figured if these guys ever wanted to leave that night they better get everything started. 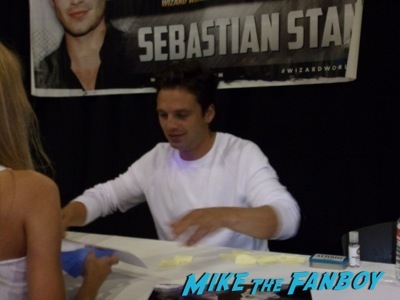 The line moved fairly quickly, even with Sebastian pausing to talk to everyone, taking lots of selfies, and giving out hugs (and dodging all the items Anthony was throwing at him). I’m pretty inept at selfies so I decided to ask for a hug when I got up there. When it was my turn I told him how excited I was to meet him. He said ever since the great experience he had at Wizard World Philly he wanted to do another con and was happy he picked Chicago. After he signed my photo I asked for the hug and he stood up, leaned over the table, and hugged me. I thanked him and told him it was nice to meet him. He told me the same. When Katie went up to meet him she told him she was nervous and he said “Don’t worry, I’m nervous all the time.” What a sweetheart. I’m sure the whole experience was overwhelming for him, but you could tell he was excited to be there and kind of in awe of the crowd he drew. He is truly one of the sweetest, kindest, most genuine people I have ever met. When the handlers told him to stop taking selfies to help move the line along he said, “No, if they want to take pictures I don’t mind.” Also, I heard during photo ops he was giving out hugs and kisses (which was against the rules). What a class act. 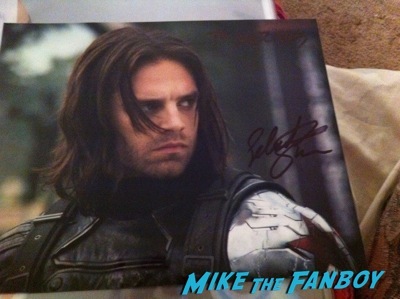 After that we walked around and looked at the other celeb tables. This year’s big draws were Matt Smith, Karen Gillian, Stan Lee, various Star Trek cast members, Norman Reedus (as well as other cast members from The Walking Dead), Evan Peters, and David Boreanaz…just to name a few. Jess wanted to meet Karl Urban so the rest of us waited while she did that. He didn’t have much of a line and his handler told us he didn’t like to come out and sign until he had a fairly big line (umm okay?) and then asked if we wanted to buy tickets. None of us did so we walked around a bit so she’d stop bothering us. David Boreanaz was being VERY strict and not allowing any photos at his table (he even had to security guards surrounding him). I thought that was a little extreme. Finally Karl decided to emerge and Jess was very very happy with her autograph and hug. Day one complete!

Sunday was a little less hectic. We got there after 10am and went to see Stan Lee’s panel. I had never heard him speak before and was happily surprised to find him quite sassy. He was challenged to do the Ice Bucket Challenge and just as the water was about to be dropped on his head the water was instead dropped on a Funko Stan Lee. It was very cute. After that it was time for the Sebastian/Anthony panel. Because of our passes we were able to sit third row. I’ve never been that close at a panel so it was very exciting. Anthony and Sebastian have great chemistry and were hilarious. Anthony is so quick witted and Sebastian got in a few good jokes himself. The hour passed much too quickly. 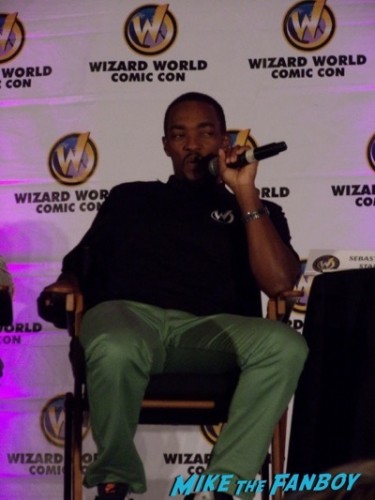 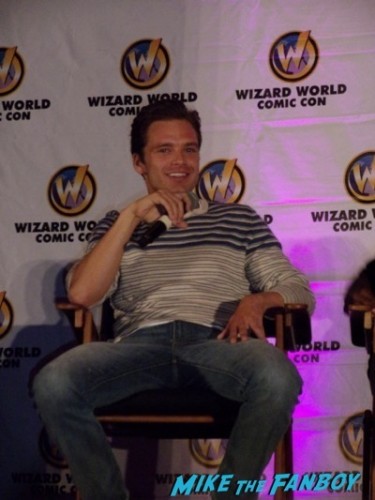 Brandy and I each had an extra autograph pass for Sebastian so we went down to his last signing. The line was just as long as the day before. When Sebastian arrived everyone cheered for him and he was grinning like an idiot. It was too cute. The session moved much faster that day and instead of selfies they encouraged you to give your camera to one of the volunteers and she took your picture. Brandy gave him a belated birthday card and he looked up from the picture he was signing, smiled, and told her thank you. I think he made her whole year with that one smile. I had him sign our photo op from the day before. He was signing fast and furious. I told him he was like a machine and he looked up (a little bewildered) and said he was in the ‘zone’. He posed for a picture with me and I thanked him before heading on my way. I felt a little bad for him because you could tell he wanted to take his time with each person, but the handlers were being much pushier than before and I’m sure he was exhausted from the day before too. 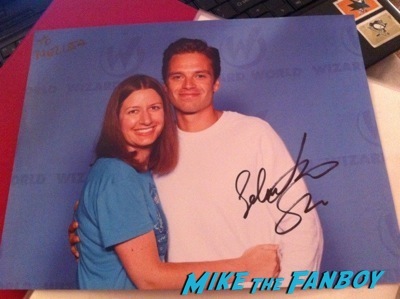 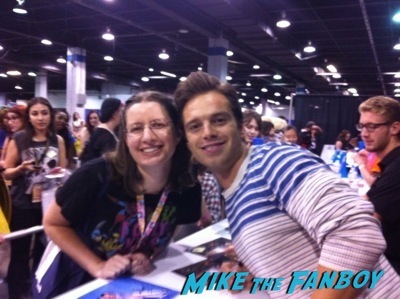 I couldn’t have been happier with my experience. Meeting Sebastian was incredible and the Con (which is sometimes VERY unorganized) was well put together. Now I have a year to recover until my next spin!