Home / Big Mike • Fanboying! / Big Mike Meets Michael Keaton And The Moment Leaves Him Colder Than Ice! And He Even Got Something Signed! Doh!

You know, it’s one of those things I keep hearing about, “Why do you keep going out for people you know aren’t nice?”

To that, I say, “Because you never know.”

Big Mike headed out to try and meet Michael Keaton…. I know… Michael Keaton. One of the most temperamental and least fan friendly stars out there. Sigh…

The thing is… Big Mike was one of the fortunate few who got something signed by Michael and the moment still left him cold.

Hey kids, Festival Season is officially upon us! Crap. What that means is countless Q & As, screenings and “Hey Bitches! Nominate Us” parties to kiss the right amount of ass to make it to the next round, which is Awards Season. Fun times ahead. I decided to head out to Hollywood over the weekend where there was a rare occurrence happening. Michael Keaton and Notorious Hollywood Asshole (and yet, phenomenal actor) Edward Norton were appearing at a talk touting their new movie Birdman. I still have yet to see the movie, but it looks interesting and it is definitely on my must-see list. I had no interest in Norton whatsoever. My honey and I tried for him once a few years back and had him all to ourselves and he couldn’t have been a bigger douche to one of his most respectful and loving fans. I won’t go into it, but he’s the reason my honey doesn’t do this stupid hobby anymore. He can suck it. I believe the talk about how he has lost roles and doesn’t get a lot of work due to his poor attitude. What a waste. Such a talented ass-douche.

Anyhoo, I once tried for Keaton a few years back at a Q & A in Santa Monica. I wanted to try and get him on my Jackie Brown poster. I love Tarantino movies and try to collect all the posters of his flicks. I didn’t have much luck once Keaton arrived that night. He was completely surrounded by dealers and a couple of fans and even though I was able to get my poster in front of him he didn’t sign it. He might’ve thought it was a Batman poster due to the way it was rolled where it looked all black. He just doesn’t sign Batman stuff for whatever reason. I felt bad for my new buddy Pat, the Batman Fan. He had a cool Batman figure from ’89 that would’ve looked cool with an autograph on it. I think he and I were the only ones who didn’t get something signed that night. I thought I’d try again with the same poster a couple of years later. This event would take place in the morning, which meant I’d have to get up early and get there a couple of hours early. Yay. I don’t bring high hopes to shit like this. I was expecting a ton of dealers when I arrived, but there were only a few and I had a primo spot for myself, Pat the Batman Fan (check out his kewl Batpodcast) and Mike the Fanboy. This luck was as rare as a Michael Keaton appearance. I’m guessing the early hour and the hot-ass sun were a factor. In fact, every one of us just left our stuff at our spot and huddled in the shade like it was an outdoor circle-jerk. (That’s a thing, right?) A few more folks moseyed on over including our favorite Fanboy, Mike. Always good to see him, especially on sunny days like that one where I could stand in the shade of his tall stature. What a guy! 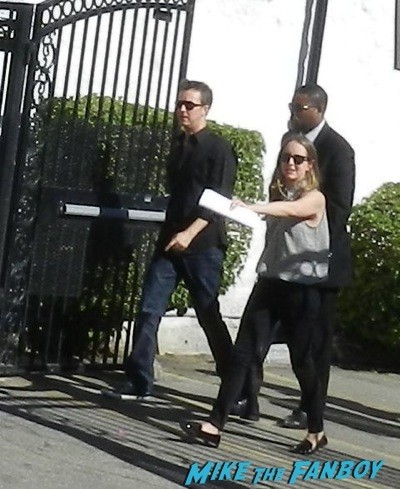 After a few close calls where everyone would start rushing to the fence whenever a black car or SUV with tinted windows would drive close by, Edward Norton, Hollywood douchebag, arrived. Not surprisingly, a handler said he had to get inside. A couple of the dealers asked Norton, Hollywood A-hole, if he’d sign on the way out. “Maybe, yeah.” I was shocked we even got a response. Him coming back to sign for us would have to be seen to be believed, but he wasn’t on my list of priorities one bit. He can suck it, you see. Once Norton, Hollywood Douchebag Extraordinaire, arrived we all stayed in our spots along the fence waiting for the guy who played Beetlejuice. It wasn’t too long after that Keaton’s car pulled in and we all put on our best puppydog eye expressions hoping he’d cave and sign away for us. Now he arrived pretty close to the start time so it was no surprise when he ignored us and walked right into the theater. This is the part where us “graphers” play the “Will He Sign On The Way Out?” game.

It’s highly complicated. It involves body language, star alignment, what the celeb had for breakfast, the gross of the last three Rob Schneider movies for some reason and whether or not Andy Dick is in jail at the moment. I never win. I don’t know if the equation involves movies where Schneider had top billing or movies he just appeared in. The good? news was that this event was just a conversation about the movie and not the showing of the movie. I don’t know either of these two guys to big talkers so I was expecting just a nominal wait. I wasn’t too far off. Keaton’s handler came out and to inform us that if he would sign he would only sign in blue. Ace made sure to have as many blue sharpies tested as possible. That meant I would have to re-roll my poster to an area where I wouldn’t have to rely on needing it signed in silver. Pam Grier and Robert Forster had already signed in silver, but if I wanted Keaton I’d have to get over it. Of course, if he was willing to sign Batman stuff I had a figure in my bag just in case. I nabbed a spot close to the middle of the line so I figured I’d have a minute to see what Keaton was willing to sign. Out came his handler and told us to just line up and Keaton would sign one each for us. Whoa, could this be happening? 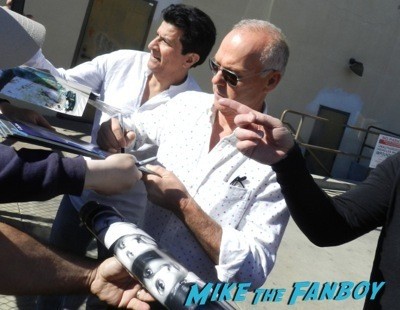 He started all the way to the left and started asking everyone their names. It looked like most of the stuff down that way was all Beetlejuice and Batman. At this point there was some dude from the inside trying to paw his way in between me and the guy on my left. Nice try. No way I was going to budge after waiting in the sun for the last few hours. If you didn’t have to hold onto the fence with one arm over it the guy might’ve had a shot, but screw him for trying to butt in at the last possible minute. I’ve waited aboot three years for this chance and I’m not giving it up now. Once the guy gave up my full attention went back to Keaton. I saw someone put a Batman picture in front of him and heard Keaton say “I can’t sign that”, and moved on. 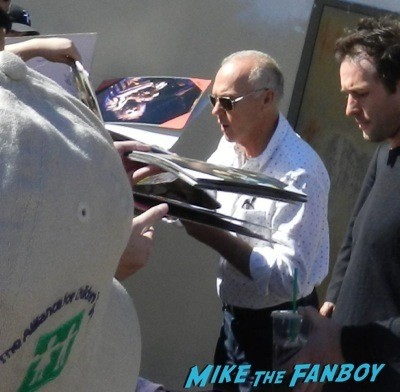 He seemed to be skipping a lot of folks and as he got closer to me I saw him notice my poster and start moving towards it. I felt like I had a good shot. He signed one or two more before making his way to me and then asked me my name. Crap! I hate personalized autographs. I know my freakin’ name and I’m not out to sell my autos. I hesitated as he waited for me with marker in hand. I relented and got a “To Mike” on my poster as he moved to my right skipping aboot the next five dudes in line, including Fanboy Mike and Pat the Batman Fan. I felt bad for those guys. Mike had a really cool “Book of the Recently Deceased” display thingy from Beetlejuice which he would’ve been fine with had it been made out to him and Pat once again would get stiffed on an ’89 Batman figure. Keaton maybe signed a few more after me and made his way to his car leaving a lot of sad pandas in his wake. 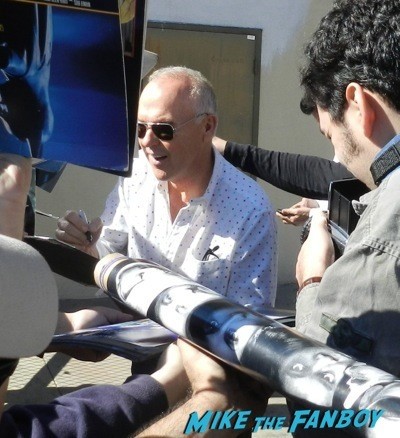 The bummer of it all was when his handler guy said he’d sign one for each of us. I guess I can’t complain, but now I think I’ll get a new Jackie Brown poster to just display blank. I dislike personal autographs that much where I won’t even display them unless it has some sentimental moment value. I know, I’m going to be crying myself to sleep for weeks to come on this one. Ahh, First World problems rule!