Home / Manic Mondays! • Pretty In Pinky / Manic Monday! Pinky Gets Trapped In A Theater With The Cast Of Orange Is The New Black! But Still Gets To Meet Samira Wiley! Selfie Good Times!

It’s awards season and during this time, there are so many fun events it’s mind boggling!

Pinky headed to for a rare q and a featuring the cast of Orange is the New Black. She had a good time, but she was stuck in a theater with some of the cast because of an overzealous usher. Ummmm calm down people!

Hello, my lovelies. Pinky Lovejoy-Coogan here thinking about awesome shows. As we’re coming into awards season, it’s the time to celebrate greatness. One of my favorite shows right now is Orange is the New Black. 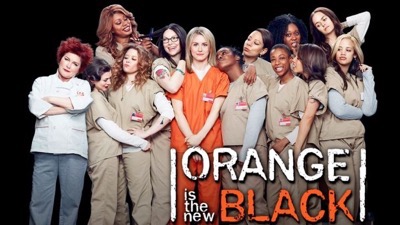 I LOVE that show and all of the people on it. Over the years I’ve been lucky to meet a lot of the cast members. A LOT of them. They’re great and normally really fan friendly. One day I’ll have to do a post and just share all my pictures with you, but for today I wanted to share my most recent “get” with a character who is no longer on the show (I’d say it’s a spoiler alert, but it’s been six months since it aired), Samira Wiley who played Poussey Washington. 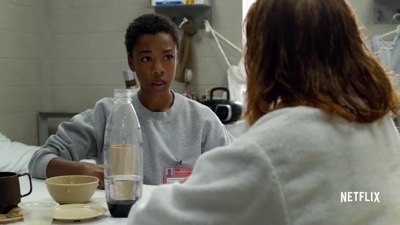 Poussey was such a light on the show. With her vibrant smile, kind heart, and loving spirit, she was one of my favorites, so seeing her accidentally killed on the show broke my heart. Now, I’d seen her out and about over the years, but she’d never come over to the rails I was on. She was a tough one! 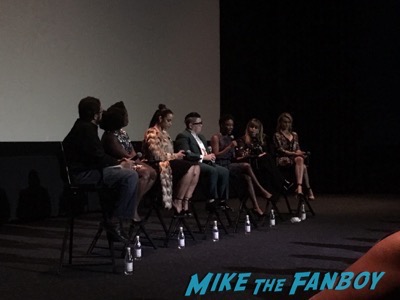 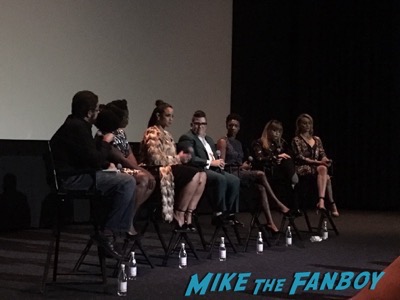 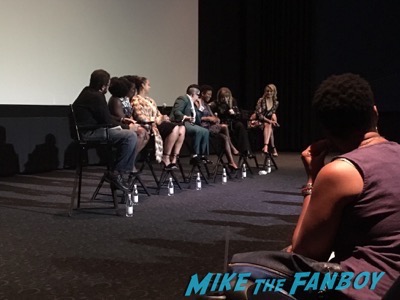 So, when I saw she’d be at a Q&A with other members of the cast, I jumped at the chance to go. I’m not going to lie – it was an odd screening. Normally there’s a screening of the show, a Q&A and then some general mingling with the cast (at least a few autographs/pictures are usually done before they’re taken away). But this time was different. Once the Q&A was over, some random movie theater workers held their hands across the seats in front of the cast and yelled, “NO!” They then proceeded to hold the entire audience as prisoners until the cast was able to leave. Now, I understand them wanting to protect their cast, but it’s called security and they didn’t have any. Holding us hostage was not a great idea. Luckily, I had the brief window of time to get out in front of the cast before they stood up (as I was the first one to Samira after the Q&A), so I ran out into the lobby before they decided to hold everyone inside (I had no idea that was going on at the time; I was just trying to position myself where I might be able to get a picture with Samira). Keith, however, was trapped inside and very unhappy. I placed myself at the door outside the theater and waited for the cast to leave. One by one they came out and since I already had pictures with everyone else (Taylor Schilling, Natasha Lyonne, Uzo Aduba, Lea DeLaria, and Dascha Polanco), I focused my attention on Samira. Once she came out, I quickly asked for a picture. She said she had to go, but could do it if I was quick. Thankfully my camera didn’t lag and went off faster than expected (hence the crazy look on my face). It was super quick and then it was done! Wahoo! I made sure to tell her how great she was and then made my way back into the theater, which was a total mistake as then I was trapped. BOO. 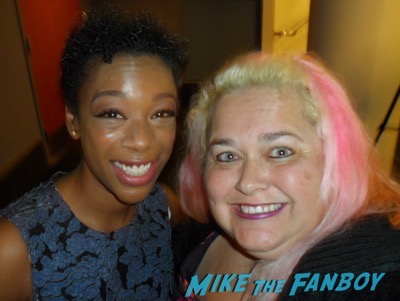 Look, I’m extremely grateful for the rare opportunity to attend these kinds of events, but this was for members of a nominating committee. Being trapped in there should never have happened in my humble opinion. Still, I’m thankful for the picture and opportunity to see the Q&A and re-watch the finale. Seeing it on the big screen was even better than watching it at home!