Dude, I just got this awesome report from Christian! He was able to visit the set of NCIS! That’s awesome in and of itself, however he then was able to meet the cast! Say wha?

I know right?!? Pretty darn epic if you as me. I’ve been lucky enough to visit a couple sets and each time it was amazing. I’m telling you, it’s a once in a lifetime experience!

Christian was able to meet Mark Harmon which I’m only slightly jealous of! Summer School! Had to be said.

Check out Christian’s full set visit after the jump!

During my time in California in March, I had the privilege of visiting the sets of NCIS, NCIS:LA, and Criminal Minds thanks to some of my family friends.

My first day in California, we went to the NCIS Studio. We arrived at around 6 am and parked next to Pauley Perrettes spot (which I thought was awesome). We then met up with my friend and started with breakfast at the studio.

After breakfast, we headed to Gibbs’ basement set. It is amazing. All the sets there look exactly like they do on TV. We then headed to Vance’s office and to the Squadroom. In the Squadroom, I sat in Gibbs and DiNozzo’s desks.

We then headed to MTAC where we got to meet Mark Harmon. He is such a great person! He signed my photo, and took a picture with me. He then asked if we were going to stay and watch them shoot and I said “of course”! 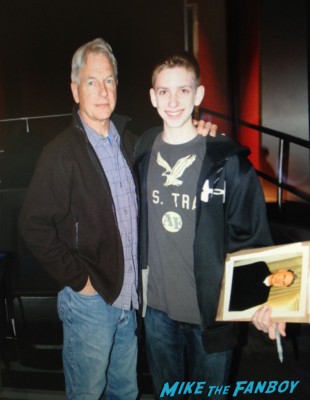 After meeting Mark, we went to Interrogation and Autopsy. After that, we ran into Cote de Pablo on our way to Abby’s Lab. She was so kind. She gladly signed my photo and took a picture with me. We then started talking about the show and she asked if I was excited for the finale! 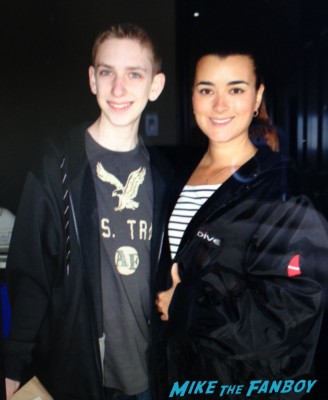 After that, we headed to Abby’s lab and got to take pictures in there. It’s so amazing!!

After Abby’s lab, we met Sean Murray at his trailer on our way to see a new set for an upcoming episode “Berlin”. He was so nice. I can honestly say that the entire cast and crew are so kind and friendly at the studio! 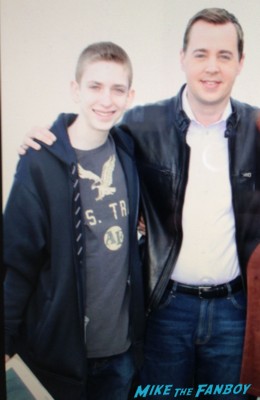 As we continued walking to the new set, we met Michael Weatherly at his makeup trailer. We were talking for a while and then the director came over and asked him some questions. He said he had to go but he really wanted us to stay and watch them shoot some scenes. So we followed him to the stage and watch them film. He is so funny and is a real jokester on set. He really lives up to his reputation. 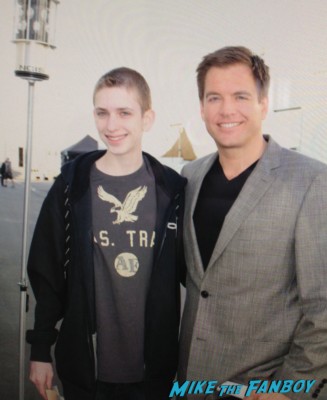 We finally got to the bar set for the episode “Berlin” and took some photos in there.

We were about to finish out day when my friend noticed that Pauley Perrettes car was here. We got so excited and found her in her trailer. Unbeknownst to us, it was her birthday! She came out and I went to shake her hand and she gave me a huge hug and thanked me for being a fan. Once we found out it was her birthday, we went in for another round of hugs! She talked to us for a good 20 minutes before her makeup person pulled her away to get ready to shoot a scene in her lab. She is one of the nicest people I have aver met and you can just feel the goodness radiating off her when you meet her. 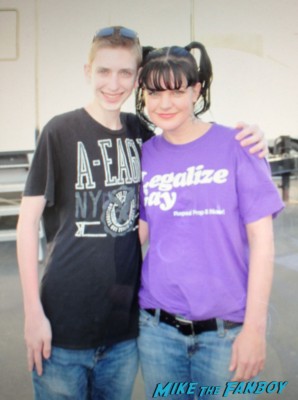 That concluded my day at NCIS and it was a set visit that I will never forget!