Season two of Penny Dreadful is burning up the airwaves and Anushika is back with a recap and review of season 2 episode six… Glorious Horrors! I love that title. It makes you want to wring your hands and cackle to frighten small children.

It was another awesome episode! Check out the recap below!

The episode opens with the maid walking into Mrs.Murray’s bedroom to find her lifeless body huddled in a corner. The blood drained corpse now matches with her wax figure. 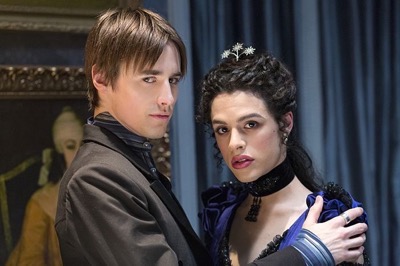 After an exciting night all the couples wake up with a certain beam in their faces. Victor Frankenstein wakes up to cheerful humming. Lilly is making him breakfast. I guess she had an awesome night. From the honeymooning couple, we get taken to the not so innocent Madame Kali who steals a lock of Sir Malcolm’s hair while he is sound asleep. Lastly, Dorian startles Angelique while she wastes no time getting her face on. To celebrate Angelique, Dorian decides to throw a ball in her honor. What is there to do when you are handsome, filthy rich and got plenty of time on your hands? You fool around and throw massive parties. Dorian Gray is a fabulous creature.

Ethan and Vanessa await Sir Malcolm to deliver the unfortunate news about his wife Gladys. To their surprise, Sir Malcolm acts totally nonchalant about the death of his dear wife. Let’s just say he was more concerned about replacing the carpet. Cold! Completely oblivious to the “acupuncture” session Madame Kali performed on him during the night, Sir Malcolm goes on about his day without a care in the world. Meanwhile, Madame Kali hums away her day putting on the finishing touches of one of her favorite wax dolls. 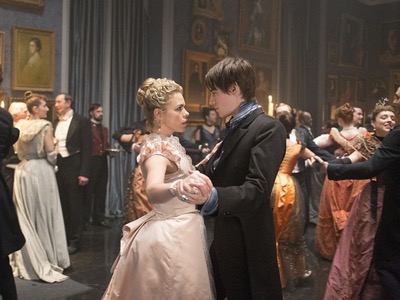 Mr. Putney’s daughter bonds with John, but it takes a turn as soon as she feels his hands. The sheer lifelessness of his hands scares her to her core. Shaken by her bold questions, John mumbles unable to come up with an explanation. He is saved by Mr. Putney who was standing in the shadows. He walks in and takes John away to work on his new project.

Ethan gets an unwelcomed guest at the house, the sole survivor of the Mariner’s Inn massacre. He is still determined to take Ethan back with him. Pretty brave for a tiny Cyclops with a half chewed up face. Ethan’s threats don’t get to him, but aggravates him even more before he takes his leave. 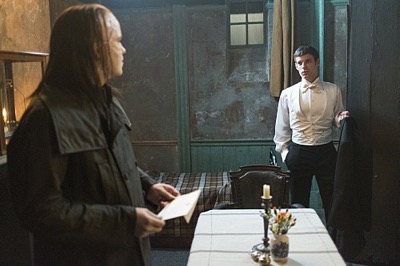 Vanessa and Victor take a crack at solving the infamous Devil puzzle. Victor is alarmed as soon as he finds out about her encounter with John Claire. The flower on Victor’s jacket directs their conversation down a more pleasant path. Victor is definitely smitten by Lilly. Dorian Gray pays them a visit to invite them personally to his ball. Vanessa survives the awkwardness and Victor scores an invitation to the fabulous party.

The day keeps getting stranger. Vanessa walks in on Sir Malcolm pondering about his beard. Madame Kali really got her claws, or should I say spikey ring pretty deep in him. He is more than delighted to get an invitation to the ball.

Meanwhile Ethan checks out the Putney’s Wax House where he runs into Inspector Bartholomew yet again. Their mind game continues with the inspector being blunt about Ethan’s involvement in the Mariner’s massacre. It’s just a matter of time before he gets the evidence he needs to put Ethan behind bars or worse. Ethan walks back with a sour mood and shots down Vanessa’s invitation to accompany her to the grand ball. 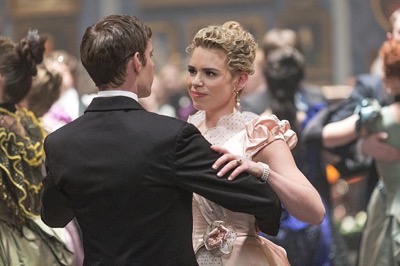 Night of the ball everyone is quite taken back by the lady of the hour, but the party goes on without skipping a beat. Victor and Lilly enters the ballroom and a hint of her memory crawls back into her. Not only the ballroom, but Dorian Gray himself freezes her motionless. For a girl who had to look towards Victor after every word for his approval, she accepted Dorian’s invitation for a dance without a flitch. He enjoyed sleeping with her while she was a dying creature, not a surprise to see him enjoy dancing with her while she is dead.

Clearly disturbed by the recent events Ethan seeks Sembene’s help. He asks Sembene to chain him in the basement and sit in a safe distance to observe him. He remains by his side even though he is quite confused by Ethan’s request. 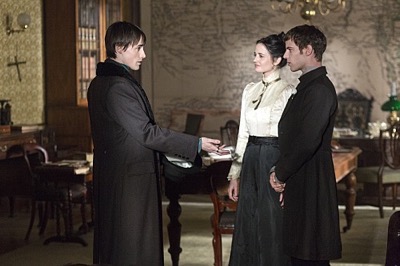 Ms. Vanessa Ives attends the ball by herself and more than shocked to meet the guest of honor. Dorian and Lilly walks into the huddle and the next few minutes consist of uncomfortable stares and snappy responses from Angelique and Victor. In the middle of everything, Vanessa attempts to distract them all by changing the subject, but fails.

A clean shaved Sir Malcolm accompanies Madame Kali to the ball. Victor is more than a little jealous about all the attention Lilly is getting from Dorian. Vanessa tries to calm his heart and suddenly gets distracted by oh so familiar unwelcomed whispers in her head. She is not quite happy with Sir Malcom’s new companion. The ladies remain civilized but the conversations turns into a battle of words. 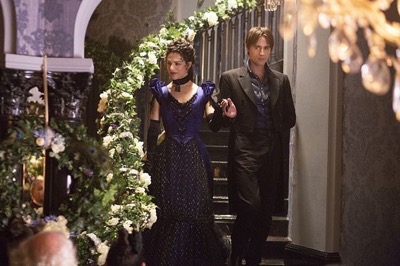 Displeased with the nights events, Victor scold Lilly. Ferdinand begs to escort Ms. Ives back home. He is definitely battling with his conscious and loyalty. Ms. Ives walks over to bid her good byes to Victor before leaving. Half way through the ballroom Vanessa spots the three witches and the entire room blurs. Blood comes pouring down soaking everyone red. The shock leaves her lifeless on the dancefloor. Oh dear!

Meanwhile Sembene waits for his “surprise” in the basement. The episode ends with Ethan turning into a werewolf right in front of his eyes. Yikes!

Never a dull day. Things are brooding in the air and the darkness keeps getting closer each week. I can’t wait to see what’ll happen. Until next time, keep shuffling those decks! 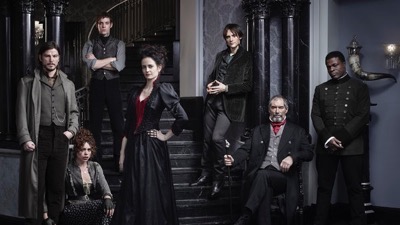