Welcome back to the DVD Dungeon!  I know E was a bit weak but I am positive you will enjoy the dark delicacies F has to offer (with apologies to Del Howison!)  Let’s get going!

1.  FUNNY GAMES:  Another American remake of a great suspenseful horrorshow of a film.  This one was actually well done.  It didn’t hurt that the director of the original also directed the remake!  Naomi Watts signed this for me at an awards festival and I got Brady Corbet to sign at a Q&A.  I would have added Michael Pitt to the cover but he supposedly didn’t have enough time to come over to the three people asking him for a graph at a recent interview appearance.  He got there early.  Took a dump at a nearby restaurant (who knows …maybe just a helluva of a piss).  Stood around waiting to be interviewed.  Yeh… no time.  “He has to get to the gym!”  one of his peeps told us.  Really?  Well I’d LOOOVE to see your new film Michael but I have to go pick up a Reese’s Peanut Butter Cup at the store and I can’t fit you into my schedule either.  Good luck at the box office when you alienate your fan base!  At least Tim Roth isn’t a jerk to his fans… 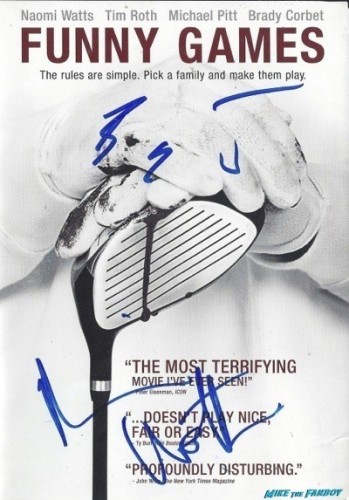 2.  FADE TO BLACK:  Not a scary movie so to speak, but a good film to watch if you have the time.  It stars “Breaking Away” actor Dennis Christopher.  Dennis made a rare appearance for a “Breaking Away” Q&A two years ago and he was not only nice enough to sign the cover, but he also signed the insert and added the film quote ” I only wanted your autograph”  Sweet!  It was also signed by producer Irwin Yablans. 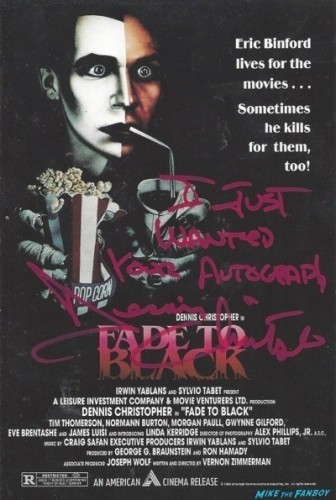 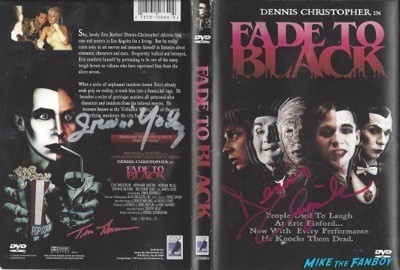 3.  FLATLINERS:  I’ve only gotten Julia Roberts once in my life.  She signed two things for me.  The first was “Pretty Woman” and this was the other.  This was a great film with a great cast.  Everyone signed the insert for me except Oliver Platt.  He isn’t as jolly about signing as you might think he’d be. 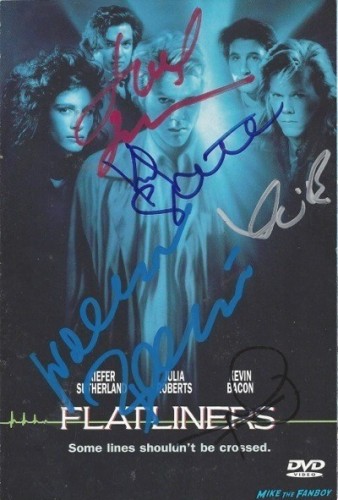 4.  FEAR:  Sure Mark Wahlberg can make with the funny (see “The Other Guys” and “Date Night” for proof of that), but I prefer Mark when he is a scary mofo on the verge of killing someone.  That’s why I like “Fear”.  He is terrifying as all hell.  In real life Mark is one of the nicest guys you’ll ever meet.  Thank God!  I’d hate to piss him off!  He signed the DVD of “Fear” as well as Reese Witherspoon, William Peterson, Amy Brenneman and Alyssa (I will not could not would not sign “Embrace of the Vampire”) Milano. 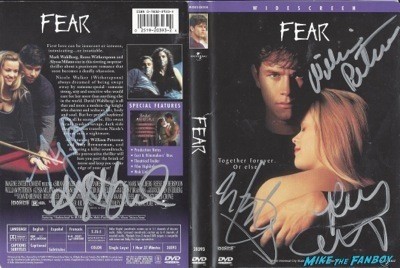 5.  FORBIDDEN PLANET:  For some classic science fiction, not much compares to “Forbidden Planet”.  I was fortunate to get Leslie Nielsen and Anne Francis to sign it before they passed away and also have Earl Hoilliman, Richard Anderson, and Warren Stevens.  Great film! 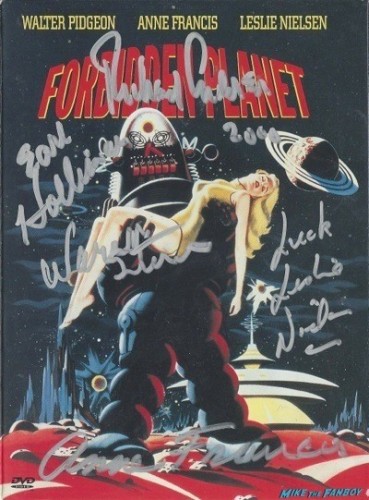 6.  FRIGHT NIGHT:  The cast for this film is readily obtainable as they do many convention appearances.  I wish I had been able to meet Roddy McDowell.  I heard he was a great guy.  DVD signed by William Ragsdale, Chris Sarandon, Amanda Bearse, Stephen Geoffreys, Jonathan Stark, Steve Johnson, Randall Cook, Mark Bryan Wilson and director Tom Holland. 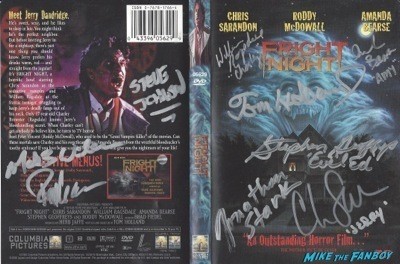 7.  FOUND:  Many of you have probably not heard of this independent film by Scott Schirmer.  The copy I have was a version before it found wider distribution.  It is now available at Wal-Mart but don’t let that fool you.  Beautiful cinematography and superior acting.  This is one of the most f*cked up stories released in the past few years.  A coming of age that is definitely not for the young or faint of heart!  At $10 you can NOT go wrong.  Go get it before Wal-Mart wusses out and takes it off their shelves.  DVD signed by director Scott Schirmer. 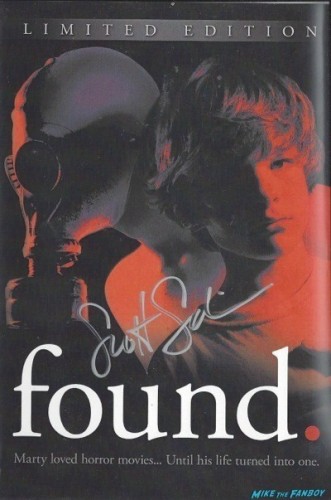 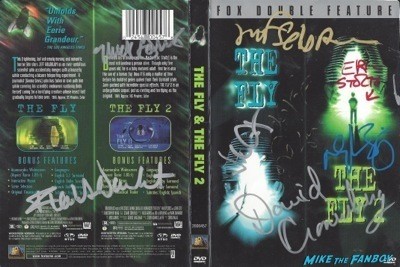 9.  THE FOG:  I know many people have horror stories about their encounters with Jamie Lee Curtis.  But most of the time I have found her to be very kind and willing to sign.  She recently announced that she was not signing autographs anymore and would only be doing so at a one-off convention appearance.  Fans flocked at the opportunity to add her to all their memorabilia spending hundreds of dollars (which went to Children’s Hospital of L.A. …great cause!  Thumbs up!)  The truth of the matter is while Ms. Curtis may never do another convention appearance again, she  occasionally will relent and sign a graph if the mood suits her.  Luckily, she signed my covers before  it became such a challenge!  The cover is also signed by John Carpenter,  Nancy Loomis, Charles Cyphers, Tommy Lee Wallace (talk about your Halloween reunions!), Tom Atkins, Adrienne Barbeau, Hal Holbrook, and Ty Mitchell.   MUCH better than the remake! 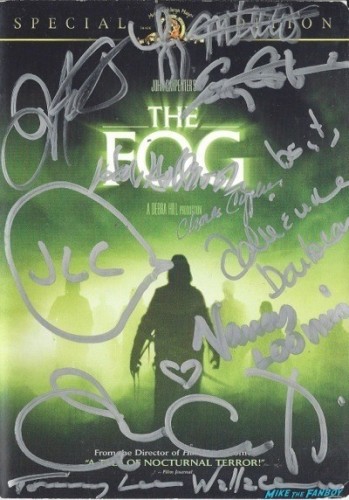 10.  FRIDAY THE 13TH PARTS 1-4:  I know you might think this is a cop out.  But my favorite choice for letter F is the first four Friday the 13th films.  Tom Savini only returned to the series because he was promised he would be allowed to kill Jason once and for all.  It was definitely a good way to end the series.  Higher ups unfortunately were not eager to give up their cash cow. Many sequels followed.  Some good.  Some bad.  Some downright confusing.  43 signatures from various cast and crew of the first four. 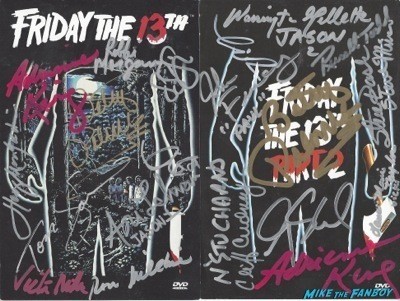 There is one thing about one of these DVD inserts that makes me cringe every time I look at it.  Sometimes in our rush to get things signed (at times there are mere seconds to get your stuff together before your window of opportunity closes), YOU GET THE RIGHT PERSON TO SIGN THE WRONG THING!  D’OH!!!  You must be familiar with the films to know who signed the wrong insert.  If you are that person who knows your F13 graphs inside and out tell me what my fanboy fail was in the comments.  The first person to correctly identify the mistake will win a DVD from my personal collection.  It is “You’re Next” signed by lead actress Sharni Vinson! 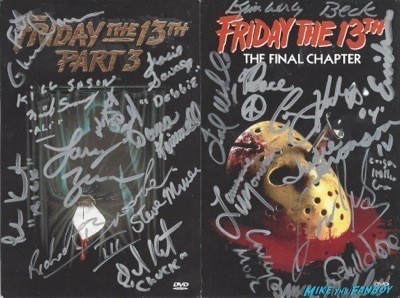 To help you out here’s the way I tried to justify the mistake to myself:  “Well perhaps the actor was featured in a flashback…”  No such luck!  Winning comment must state the following: 1) which DVD insert has the out of place autograph and 2) who signed it that shouldn’t have?  Winner will be notified by me via Mike the Fanboy…I think. 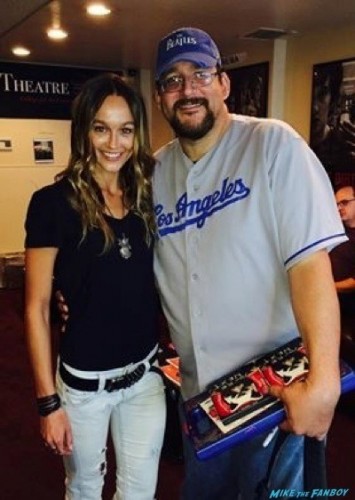 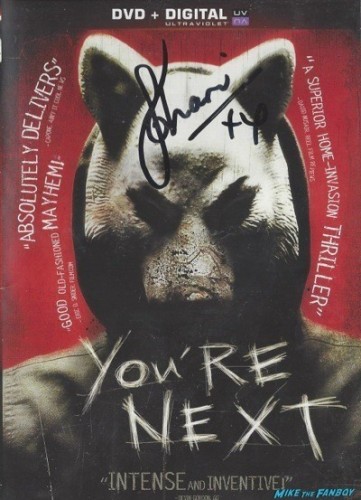