When thinking who would most appreciate watching the beginning of The Borgias season two, I immediately thought… Hmmmm The Novel Strumpet would really love this. And was I right? Yep, I was!

Showtime’s The Borgias has been a bit hit for the network and it brought Jeremy Iron’s to the small screen!

Check out The Novel Strumpet’s review of the series after the jump!

Showtime’s “Original Crime Family” is back and they’re still as deliciously bad as ever. I’ve only had the chance to watch the first 4 episodes, but what a feast. I’m again amazed by the sumptuous beauty and almost painting like qualities of some of the costumes and actors. From the profile I’d swear they were cast simply because they look like a 15th century Roman painting. Yes, the history may be a little off…but it’s a TV show so we grant a little wiggle room right? 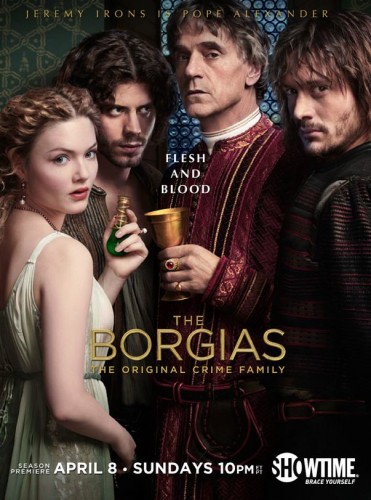 At the beginning of this season Rome is under threat by the French king (and for good reason – watch the first season if you want to know) and now the Sforza’s have joined forces with France to bring down the Borgias and ultimately Rome. After Giovannie’s humiliation at their hands who can blame him? The French canons are the real threat, but Pope Alexander (Jeremy Irons) and his son Cesare (Francois Arnaud) have a few tricks up their rather voluminous red cardinal sleeves. The Roman canon deception is brilliant! 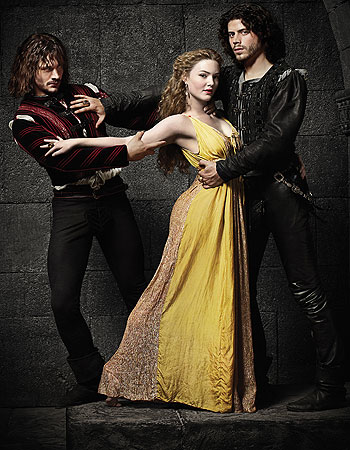 Then there is Lucrezia (Holliday Grainger). The shining light of her father’s world, she has returned to Rome with her illegitimate child after convincing her father to annul her marriage to Giovannie Sforza (Ronan Vibert) and is living in the bosom of her family as happy as ever. Until her brother Juan (David Oakes) commits an act that causes Lucrezia to nearly kill herself and her infant. However, in true Borgia style she rallies and shows Juan that hell hath no fury like a woman whose lover has been…well I won’t spoil that…but she shows that she can be as cunning, ruthless and bloodthirsty as her brothers.

Plus: Della Rovere (Colm Feore) is back in Rome and now living in a monastery that would love to bring down the Borgia clan, but he has learned from his past dealings with them that this will be no easy feat. The Pope has decided to dedicate a wing of the Vatican to housing ancient Roman artifacts and art in order to preserve their heritage. He has also put his Mistress, Guilia Farnese (Lotte Verbeek), in charge of public works after travelling through the city in disguise. He is disgusted by the poverty he sees around him and the pigeons – rats of the sky. She quickly enlists the aid of Lucrezia and the Borgia children’s mother, Vanozza Cattaneo (Joanne Whalley) – an oddly matched trio if ever there was one, but a powerful trio of women as well. And we still get a little bit of the infamous “Last Supper” in Naples….do not watch this series while eating you have been warned. 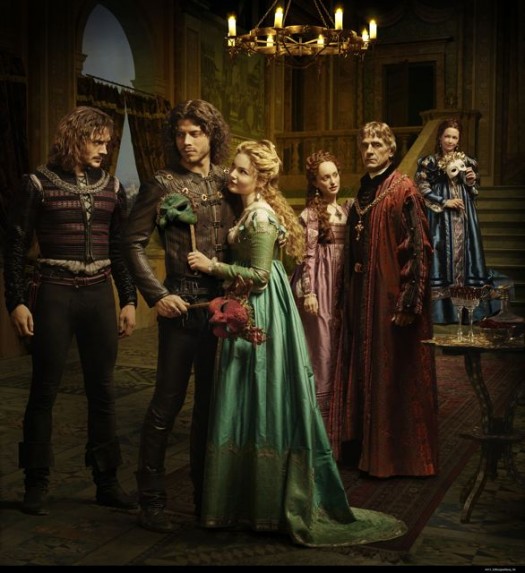 And all this in the first 4 episodes! Phwew. I like that historical figures are getting these epic television series once again. The entire cast is great at being sympathetic and nasty…um…well calling them b*st*rds is accurate according to definition ;P But to me the real standout is Cesare’s right hand thug Micheletto (Sean Harris). He’s just awesome at being a master spy and I just love the times that he comes to Cesare and is always “It’s nothing good my lord.” Hahahahaha…you know once you see him there’s going to be something “good” coming. Can’t wait to see the rest of the season.