So…I have another of Mo Xiang Tong Xiu’s works to be obsessed over.  Billibilli, Haoliners Animation League, and Funimation have brought Tian Guan Ci Fu, or Heaven Official’s Blessing, to us in donghua format.  If you don’t remember what else MXTX wrote, well then go to my post about Mo Dao Zu Shi.

Have I read the entire nearly 2,000-page translation of the novel? Yes.

Am I frantically searching for pages of the manhua based on the novel so I can read that as well? Yes.

Have I wept over how stunningly gorgeous the manhua art by Starember is?  Yes. Literally.

Have I watched the entire first season of this donghua which just finished airing in January (with a special episode a couple of weeks ago) more than once?  Yes.  More than twice?  Yes.  I’m not telling you how much more.

Am I going to go nuts until the announced live-action drama adaptation is cast and starts filming and hopefully airs sooner, rather than later?  Yes.

Have I started following a bunch of YouTubers who do reaction videos, live web novel reads, and reviews of all things donghua/Chinese live dramas/web novels in hopes I get more MXTX related content or something similar in my life? Yes.

Why?  Because I’m a fangirl and when I obsess over something…I OBSESS OVER SOMETHING! 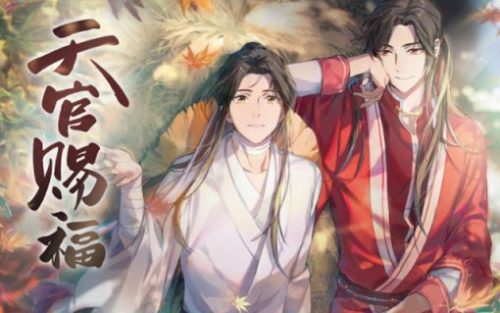 So What’s It About:

The story follows Xie Lian, the former Crown Prince of Xianle, who has just ascended to the heavens for his third time.  Over the past 800 years (yes you read that correctly) he’s gone from beloved prince and martial god to a barely mentioned memory and the laughing stock scrap collector god of the heavenly realms.  After his latest ascension, he goes back to the mortal realm to spend his days trying to gain new followers and solve several mysterious occurrences involving evil spirits, possessions, demonic objects, and the like.

During his travels, he’s helped by two lesser officials – Nan Feng and Mu Qing – and a mysterious young man named San Lang who knows more about the former Crown Prince of Xianle than anyone else outside of Xie Lian.

Honestly, that’s a terrible synopsis but since the first season barely covers around 1/8th of the book it’s really hard to say more because I’m afraid of saying too much.  So that being said…

Ok, so I thought that my obsession over Mo Dao Zu Shi was bad enough, but this one…THIS ONE…ugh.  The only reason I haven’t watched as much content is that there isn’t as much yet, but when there is…outta my way!  I’m guessing it will kick up a notch once the live-action releases.

Like MDZS this is chock full of all the goodies – intrigue, thrills, horror, action, drama, heartbreak, romance – I didn’t think MXTX could hit me in the feelz any harder than they did with MDZS and then I read this novel, and all the feelz were pummeled to within an inch of their lives.

If there is anyone out there who does not instantly love and want to protect the cinnamon roll that is Xie Lian I don’t want to know you.  Granted he doesn’t really need protection because as I mentioned above he was a martial god, which means he is skilled in combat and despite his peaceful and adorkable personality he is a man who can kick your ass with a flick of a finger – quite literally.  It’s part of the genius of his character. But seriously how does this smile not melt you?

It certainly melts the heart of San Lang– aka Hua Cheng.  And before you get yourself all in an uproar for me giving that away, if you don’t figure that out from the trailers, the moment you meet San Lang in the animation, or just from trolling the internet in general, you’re not paying attention.  And honestly, in a story filled with huge reveals and conspiracies, San Lang’s real identity is the least mind-blowing revelation.  And I can’t even get into the rest, because the animation has barely scratched the surface of this story.

The animation is pretty tight and attractive, although, like MDZS, there are some elements of CGI that don’t quite blend in as well as they should.  There are quite a few battle moments or moments where characters are moving incredibly fast that are done quite well with CGI, but then sometimes their movements become stiff like watching an animatic of the scene rather than the final product.  But it’s my understanding there was a lot of time or possible budget constraints with this first season that may have factored into that.

So far, I think the team behind the animation has also done a really good job of capturing the essence of the characters whether through the voice acting (I adore Xie Lian’s voice), animation styles, and/or personality quirks (Mu Qing’s eye rolls are legend and I’m so happy they have included them).

They’ve also done a really great job of capturing the humor and heartbreak of the story through the characters.  I think the adaptation has gone really well, with just a few quirks here and there, but if it was 100% perfect I don’t think the universe would be able to sustain itself.

Ok, so I’ve tried to be professional about this but let’s get to what we all really want to talk about.

Hua Cheng and his Dianxia…

So if MDZS took the romantic elements between Wei Wuxian and Lan Zhan and tip-toed right up to the line, Heaven Official’s Blessing saw that line and took a giant leap over it.  Granted, Xie Lian’s and Hua Cheng/San Lang’s relationship from the moment they meet in the book is filled with romantic tension, so I think any adaptation would be hard-pressed to try and cut it out entirely, so kudos to the donghua team for not trying.  In fact, all the heavenly blessings upon them for giving us little moments that are there for our visual pleasure.

Like in episode 5 when Xie Lian invites San Lang to stay at his shrine for the night and San Lang twiddles his fingers together for a second before accepting.  I squealed.  Out loud.  I’m not even ashamed.  I’m in my mid-forties and this still made me squeal.  Deal with it.  Just find episode 5 and go to about minute 13:59/14:00 to see what I’m talking about.

Honestly, once San Lang appears on the ox cart it’s one squeal fest, heart squishing, longing sigh inspiring moment after another with these two.

Then there was the gift that is episode 12. It’s filled with nothing but Xie Lian and San Lang moments and even more importantly they revealed Hua Cheng’s actual face.  I think the fandom expected that in season 2 during the Ghost City arc (I assume they will get to this arc in S2 anyway), but we got it in the last moments of this episode.  Not only that, they went back and showed us every instance he was in his actual form but Xie Lian didn’t see it fully and the audience was only teased with it through shadows or seeing only half his face or only from the back.

However, the donghua did sort of give away the link between them really early on as well.  I mean anyone who reads the book knows who Hua Cheng was in the past almost immediately, I don’t think MXTX really tried to hide that but it takes a little time before we get to that section, so it’s not the worst thing the animation made it obvious early on as well.  It’s like the animation is saying – we got so much else to get through, let’s just get this outta the way.  LOL!

It kills me I can’t even really give you more because to do so will just spoil all the fun of the journey, but gaaaaaaaahhhhhhh it’s killing me!!!!

I can’t even really talk about some of my favorite side characters because they haven’t really shown up yet or so briefly it’s not worth mentioning them at this time.  AAAAAHHHHHHH!!!!!

And Xie Lian…MY POOR XIE LIAN…seriously one of the most tragic characters I’ve read in a long time.  And in the animation, once you start to listen to the little bits and pieces said about his past and really pay attention, you notice his laughs don’t have a lot of life behind them.  His smiles never really reach his eyes.  He tries very hard to deflect attention from himself unless he’s trying to save someone, then he’ll place himself directly in front of the danger. There are some deep hurts lurking in that soul.  I just wanna give him a big old hug (but I’m too afraid of what Hua Cheng might do to me… ;P)

OH!  I can talk about one of my favorite side characters…Ruoye!  How a sentient piece of ribbon could make me love it so much I have no idea, but Ruoye has done it.  Always with Xie Lian (mostly because it’s wrapped around his wrist), Ruoye can expand many times its length to help attack, protect, and at times it even manages to give Xie Lian comfort.  Who’s best boy?  You are Ruoye!

So why’s it worth watching now…

OK, ok, ok, ok, ok.  Don’t run scared from my gushing over Xie Lian’s and San Lang’s relationship. I can’t help myself I’m a romantic at heart.  But honestly, you should give this watch because it’s also filled with horror, action, intrigue, and all the other exciting goodies.

Even though it only covers the first 250 or so pages of the novel, there is still a lot in those pages.  Xie Lian winds up traveling to 2 very different places to solve two intriguing mysteries.  In the first Xie Lian – along with Nan Feng and Mu Qing in tow – must unravel the mystery of disappearing brides.  They go missing while traveling through a mountain pass and are never heard from again.  The other time he travels – again with Nan Feng, Mu Quing and now San Lang as part of the party –  to a lost city in the desert and if you’re unlucky enough to reach the city, chances are you will never return.

I think the stories are intriguing enough that if you watch this season you’ll definitely want season 2, or may even go and read the original story (you know, if you’re crazy like me – although I started the book before the donghua released).

And finally, misery loves company and I need more people to gush about this show with!  PLEASE, SOMEONE!!!

If there any downsides they would be that some episodes are shorter because there are these cultural bits put in at the end that -while I appreciate them – I struggle to understand their purpose since other donghua’s I’ve watched don’t have them, but maybe I just haven’t run into it?  Is it a Billibilli thing because this is my first animation from them…no clue.  Also, Funimation seems to run into some quirky issues either getting the episodes up in a timely fashion – or like now – I can’t watch the episodes on my TV app through Roku, but I can through the website.  It’s weird.

Apparently, Funimation is going to be giving this an English dub at some point and I’m a little hesitant as I do really love Xie Lian’s voice in this version, but I guess we’ll wait and see.

Watch it.  Just freaking watch it.  That is all.

It’s the year of the ox.

Can we take a moment to admire the ridiculous beauty that is the opening to this show?