I’m a huge Sherlock Holmes fan and I’m pretty picky with how people use the characters outside of the Canon.  There are a handful of non-Canonical Holmesian stories I actually like, most make me want to punch things.

Something else I’m pretty adamant about is just letting villains be villains.  Stop trying to give them all these sympathetic backstories.  There are evil people in this world, so stop trying to make all of them anti-heroes and just let them be the evil a**holes.  Ok, yeah some may be tragic heroes, but some should just be the bad guys they’re meant to be.

So, when I saw the title for this anime and discovered Moriarty was the protagonist I thought “Oh, here we go.  They’re going to make Moriarty a poor misunderstood mathematics teacher that just got a bum rap because of some misunderstandings.”  Which I immediately felt negative about because I wanted my ‘Napoleon of Crime’ to remain just that.

And I can’t be happier that I was sooooo wrong. 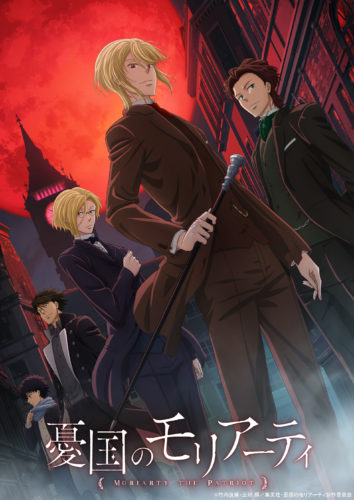 So what is it about:

Our protagonist is an orphan who, along with his younger brother Louis, is taken in by a wealthy Victorian noble family – the Moriarty’s.  However, he isn’t your average poor trophy orphan youngster, he’s intelligent, well-spoken and – he’s definitely not a lover of the noble classes.  At least, he has no real love for the class divisions between the “haves” and “have nots”.  It just so happens that the eldest Moriarty son, Albert, also has no love for the nobility class he’s been born into so decides to use his title and influence to assist our protagonist in his endeavors to purge England of its sins and bring about a new order.

To do this, Moriarty, Louis and Albert go about identifying victims of the noble classes and assisting them with finding ways to bring about justice and in some cases vengeance against those that have wronged them.  But you would expect no less from the world’s first Consulting Criminal.

To say I loved this anime is an understatement.  Pretty sure it’s going to become one of my top faves pretty quickly.

Hell may have just frozen over…

Because I’m actually watching something that makes me not want Sherlock Holmes to win.  That’s unheard of.  I’ve read books that tried to make Moriarty or other Holmesian ‘villians’ the protagonist and that has never happened.  Even as much as I love Moriarty in the BBC Sherlock series, I never wanted him to win.  But this anime has achieved that goal.

In the opening title and ending credits Moriarty’s fall off the Riechenbach Falls is not too subtly hinted at and I just keep hoping that they’ll change that ending.  What?!?!?!?  I want to change his fate????

Not only has it made me side with the ‘Napoleon of Crime’ it’s also achieved something else I thought would never happen…I may have a slight Sherlock ship starting.  OH MY GAWD!  AM I ACTUALLY THINKING OF SHIPPING MORIARTY AND SHERLOCK?!?!?!? 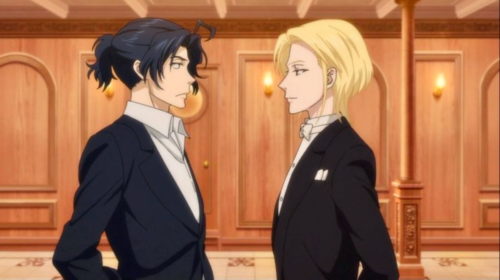 I don’t even care that Moriarty is blonde or has red eyes for some reason.  I’m smitten.

Not only that, but Sebastian Moran reminds me so much of Kuroo from Haikyuu that I have now created an AU in my head where Moran is Kuroo’s great-great-grandfather.  Aside from attitude look at these two…LOOK AT THEM!!!! 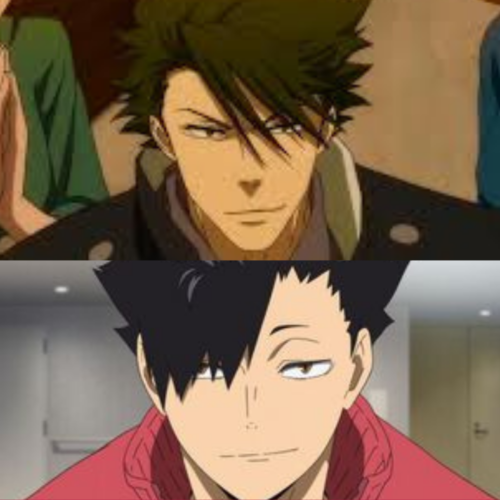 I feel if any other show tried to carry off that “consulting criminal” as a pun on Holmes’ “consulting detective” I’d roll my eyes and moan, but it just feels 100% right with this show.  Also, can I say I seriously would add the Moriarty family motto to the Holmesian tattoo I will never get (because I’m a big old wuss and hate needles/pain) but have designed in my head? Yes, yes I can.  I mean – Je Crois En Mois – roughly I Believe in Me *chef’s kiss*.  Also, if you know anything about the Canonical Moriarty and how Holmes describes him then you’ll get why this crest is perfection. 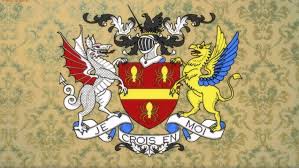 Ok, but why am I so enraptured with this take on Moriarty?

As far as origin stories go, this one is really fascinating to me.  First off, we don’t know his real name.  William James Moriarty is Albert’s actual brother and after his demise, at the hands of Albert no less, they pass our nameless protagonist off as William James and Louis as one of their own as well.

Our Moriarty is never really a victim.  From the moment Albert first meets him at the orphanage you know this kid is not your typical poor and defenseless lamb.  This kid is a manipulator from the start.  He has his ideologies against the nobility firmly set and he has no qualms about the things he feels must be done to see his ‘perfect world’ come to fruition. His charisma naturally draws people in – kids, adults, rich, poor, doesn’t matter – they all fall victim to his charm.  For those in his inner circle he doesn’t really hide who he is or his goals, which makes them all so willing to follow him in his campaign. He’s frightening, but at the same time really compelling.

The fact that we’re not trying to solve the mystery of ‘who did it’ but more of ‘how did he make them do it’ is a nice spin on the genre.  It’s a little troublesome the satisfaction I get from watching his victims fall prey to his machinations.  Granted they’re all really bad people in their own right and deserve to be punished, but the fact that I’m cheering on someone who is consistently committing premeditated devastation is a little uncomfortable and part of the reason I’m so in love with this take on Moriarty.

Then when Holmes finally shows up, he’s not this suave master detective, but this really over the top and at times annoying loud mouth who instantly becomes entranced with Moriarty as well since he’s finally met someone who is his intellectual equal.  For his part Moriarty also is impressed with Holmes, but more so as a piece on his chess set that he can now move to his will. I like this take on Holmes’ origin as well.  I think it’s a nice change and seems to fall in line with my impressions of him when I first read the stories.  That’s he’s this 20-something man still trying to figure things out and make a name for himself.  Still trying to find his path and not quite as much in charge of his sphere yet. 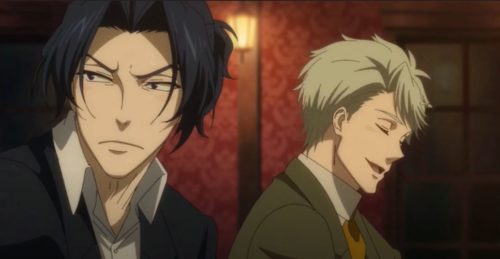 From the start we see how Moriarty starts to become the spider in the center of his web.  From getting Albert to destroy his entire family so he could take over the Moriarty titles and pass our Moriarty and Louis off as his blood brothers, to talking common people into murdering the nobles who caused devastation to their families, to framing nobles by getting them caught in their own malicious acts – Moriarty is always moving his pieces toward his ultimate goal and he does it masterfully.  And to learn that Holmes is now one of those pieces on the game board…I’m going to say it…it’s really sexy.

Sebastian Moran – Dear Heavens, never did I ever think I would be rooting for this guy either.  Seriously, one of the best moments in Canon is when Holmes takes him down, but this Moran’s swagger and unwavering loyalty to Moriarty…*heart eyes* 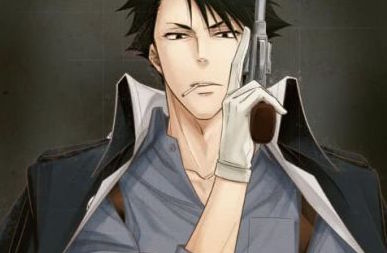 Albert Moriarty – A character invented for this show and in some ways he’s even a little more dangerous to me than Moriarty.  After all, Moriarty is an orphan, but Albert is a noble with a family who commits a heinous crime against them so he can have the means to support Moriarty in his efforts.  He’s the ultimate infiltrator as no one ever seems to suspect him of anything wrong, and I get the sense he is just enough of a zealot to eventually become a liability, but I could be wrong.  However, I heart him too. 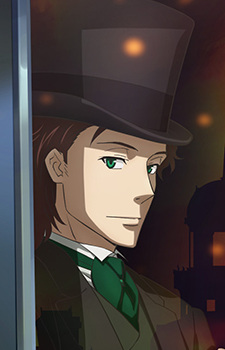 Louis Moriarty – Moriarty’s younger brother and one of the reasons Moriarty puts all of his plans in play.  We haven’t really gotten to see much of him yet aside from just supporting his brother but given how he hates the way Moriarty is interested in Holmes and some of the things he’s said I have a feeling he’s going to play a much larger part soon.  I’m excited to see what it is.  Also, I have to have my megane obsession and Louis isn’t too shabby… 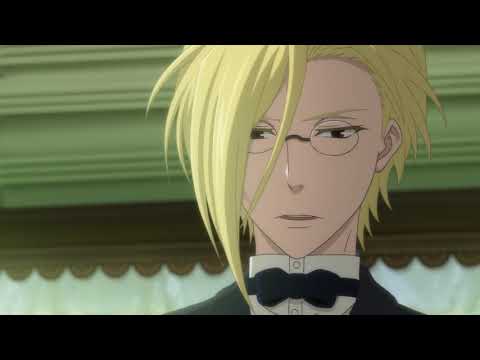 Fred Porlock – Another Moriarty sidekick, created for this show. He’s smol but dangerous.  So far he’s been really good at disguises and I’m interested in seeing what more he can do.  He also seems to be close to Moran which is another reason I’m fixated now on Moran being Kuroo’s ancestor.  Fred is pretty similar to Kenma.  And there I am with my AU Moriarty/Haikyuu mash-up again.  AAAAAHHHHH!!!! 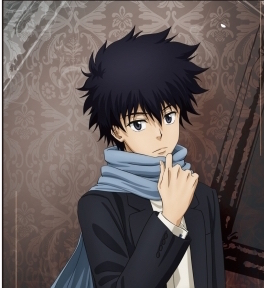 John Watson – Still Holmes’ sidekick and conscience, and still a cinnamon roll that must be protected at all costs. 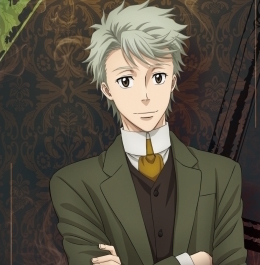 We also get a different take on Mrs. Hudson and Inspector Lestrade that I’m liking so far.

Honestly?  Only the fact that they’ve only released the first 11 episodes of the 24 planned and the remaining 13 aren’t slated to air until April 2021.  Grrrrrrrr…

Also, I’ve seen it being compared to Black Butler and just…no.  Outside of them being in the Victorian era and aristocrats being involved there is really no comparison so just stop.  I love Black Butler and I’m falling in love with this anime, but I do not love them the same.  So just stop.

Like I said I’m falling in love with this anime.  IN LOVE!  If the remaining episodes are as good as these first 11 I’ll be a goner.  I’m a little upset that I passed on the mangas because I figured this wouldn’t be any good.  I admit I was wrong and after the anime completes airing I’m going to go back and read them.  I don’t want to do it now because I don’t want to spoil the show.  I’m too invested now.

Apparently there was a musical adaptation in Japan.   Not sure how I would feel about seeing a singing Moriarty/Holmes…guess I’ll have to hunt down some images/vids to see 😉

Another MXTX novel has me in its clutches…

It’s so wrong how sexy this is…

Or how sexy these are:

Holmes delivering a version of one of my favorite lines from Canon:

Yeah…I don’t wanna ship it…but I’m kinda starting to ship it.  HELP ME!  No, seriously, someone help me…

Because we can’t have too much Sexy Moran to ogle: