I was planning on trying for this, but sleep won out I think… Oh, nope there was another event… that’s right… I have a legit excuse! lol… Scotty, Anushika, Susan and a bunch of MTF peeps were out and about for this one! Sweet!

Check out CB’s Coverage after the jump!

NANANANANANANAN, CB, CB, CB! I am super excited for Real Steel because it looks amazing and stars Wolverine himself, Hugh Jackman. I’ve met Hugh before (you can see the write up) and he was nice to the three of us waiting for him. I’m psyched for Real Steel because it features Robots and Evangeline Lilly. When i found out they were doing a premiere for the movie, I was hesitant because the venue isn’t the fan friendliest. In fact, no one really went for that same reason.  I really wanted to go because I’ve never met Evangeline Lilly and was hoping she would show up and sign some autographs. I had a photo for Hugh, a photo for Evangeline and a Real Steel poster. Here’s hoping for the best.

3:00: I arrive to the venue and as expected, there are only three people here. One of them is Susan, who is on her 10th chance trying to get Hugh Jackman. I was with her when she missed him by ten minutes, and she was determined to get him today. 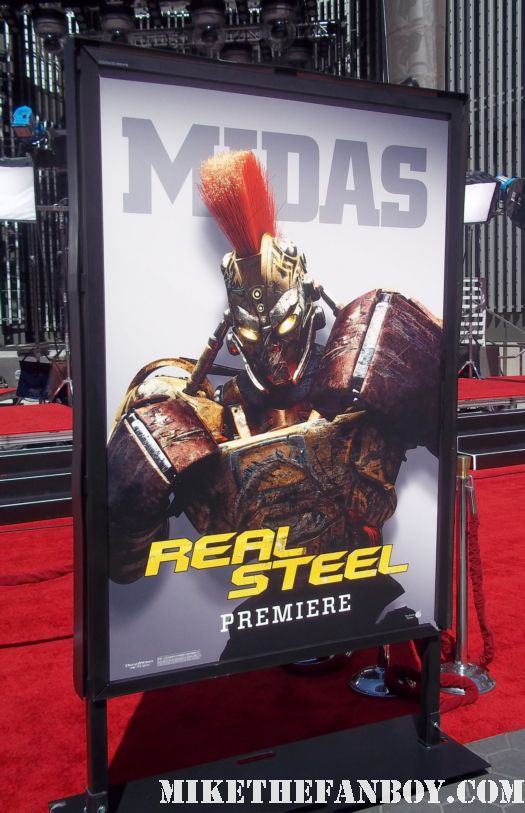 3:30: Security tells us they are making a fan section for us, and judging by the stage and gap in signs, its pretty close to the carpet.

4:00: Yea, that fan pit section, well now we have posters in our way and its roped up..thanks security! 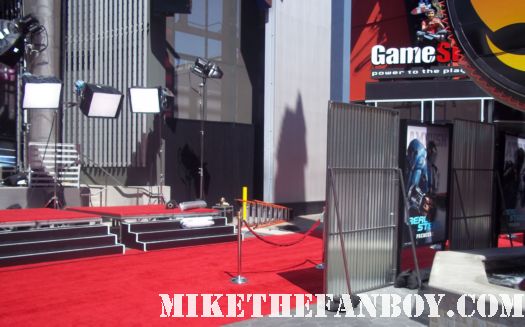 5:00: This premiere is at an unusual location and everyone passing by is drawn to the GIANT red carpets and Robots on display. So the barricade begins to get full. 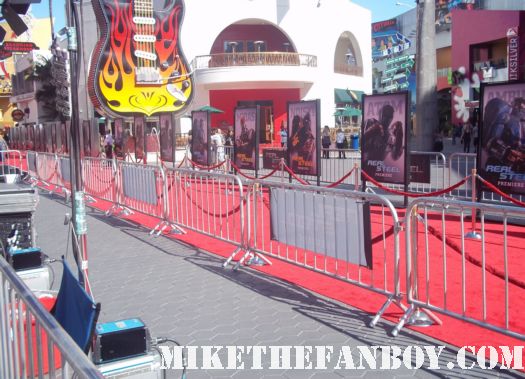 5:30: They are starting the premiere and the first people we see introduced on the stage is Dakota Goyo. He talks to the crowd and then does interviews. 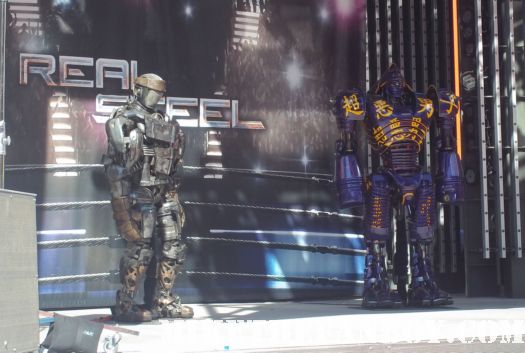 5:45: Next guests to greet the crowd is  star Hugh Jackman and director  Shawn Levy. At this point, the crowd is in a frenzy. Hugh thanks us for being here then says he is going to be giving away tickets to the premiere. Everyone goes nuts. 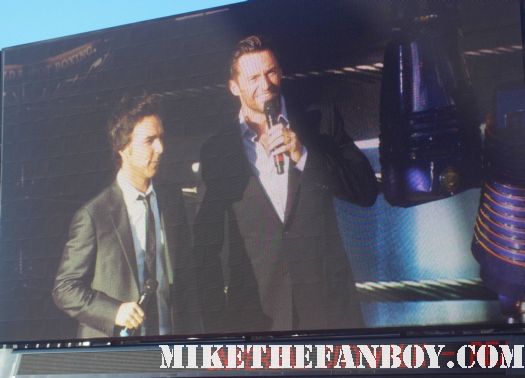 6:00: True to his word, Hugh comes over the the fan section and hands out red envelopes with tickets, credentials and a gift card to del taco to lucky fans. I am able to get one and he is handing them out to everyone who was here early. Then we ask him if he can sign, and i give him my pen and he signs my photo then everyone else’s. 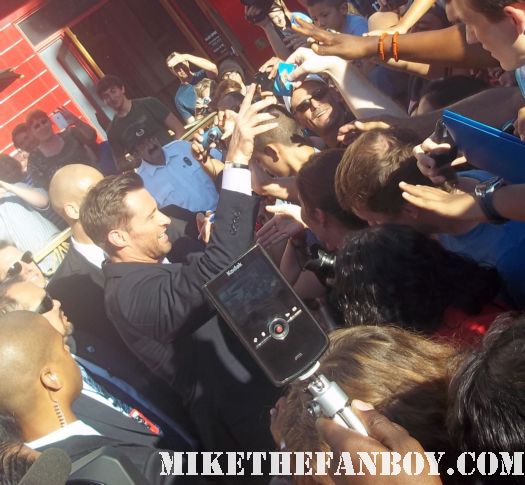 Hugh says to me, “can i take your pen” I say sure and he promises me to bring it back. After Hugh signs, he makes sure to get me my pen back. 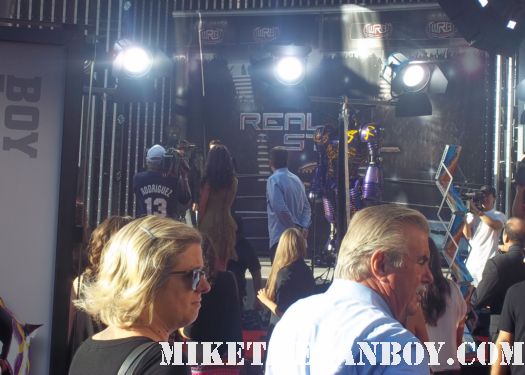 6:01: As he signs, I yell to Hugh, “Get her (SUSAN), she’s a huge fan, “and he moves stuff out of the way and signs her poster. Tenth time is a charm for Susan. You would think people would have stuff for him to sign, but in reality, a majority of the stuff he signed was random items people had…including someone’s iphone.

6:10: We are told we have to go on the carpet and into the theater if we had HUGH tickets and I leave, right before Evangeline comes over. I’m walking the carpet and see her doing interviews. Next time.

6:30: Everyone is watching the movie and its craziness because we are also allowed to go to the after party outside. 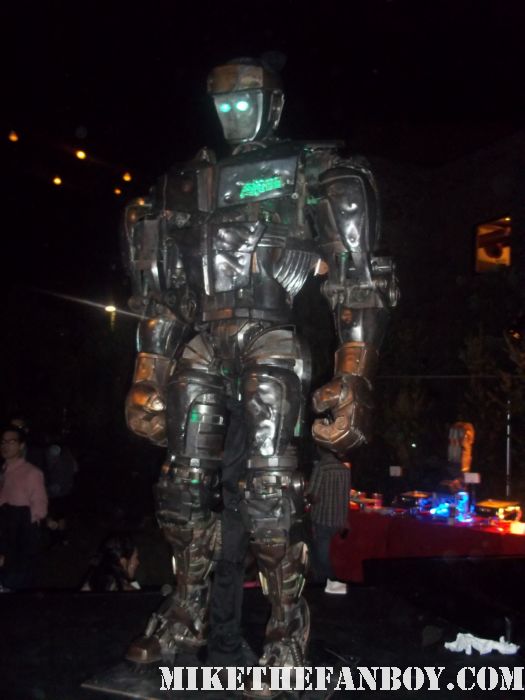 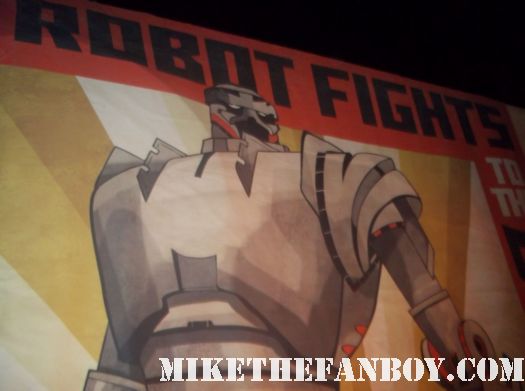 8:00: The movie lets out and we head over the the after party. THey after party is amazing with catered food, open bar and all the robots on display. It was amazing and a once in a lifetime experience. 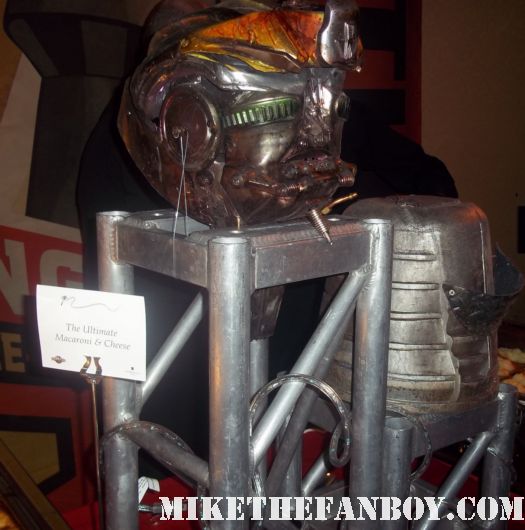 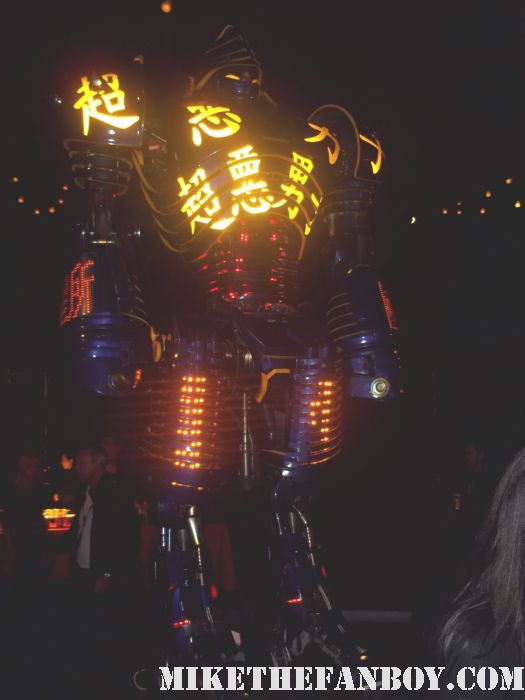 I could not have asked for a better day. It was amazing and all thanks to Hugh Jackman. Hugh, I’m a fan for life. Until next time, same CB hour, same CB Channel, same CB blog. KAAAAAPPPPPOOOOOOOWWWW! 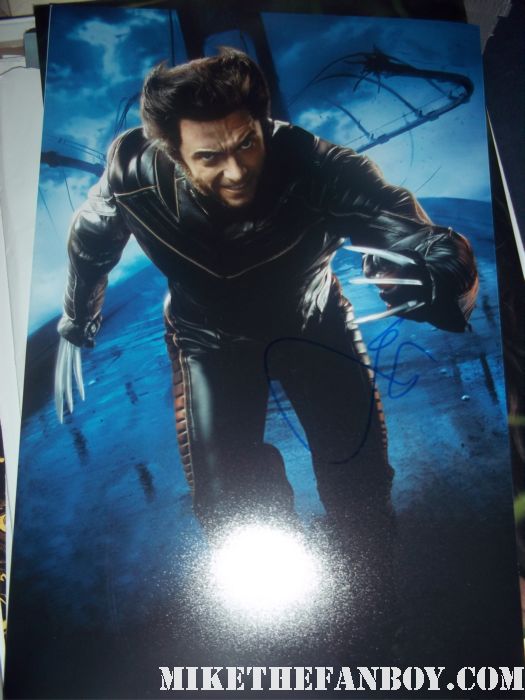