I admit it, I’m a sucker for an amazing special edition set. Some of the creativity and thought that goes into these is really outstanding.

The new set for The Strain, is one such set. It’s pretty Frakkin’ awesome! I’m not sure you want it staring at you at night, but it’s pretty cool. Guillermo Del Toro has done a great job with this series.

Check out the full press release with all the info below. 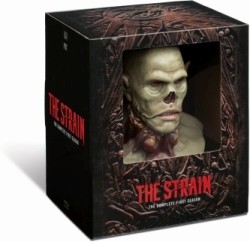 “The Strain” Season One
Experience the first season of TV’s hottest, most blood-curdling sci-fi series – from Executive Producers – Writers Guillermo Del Toro, Carlton Cuse and Chuck Hogan – along with behind-the-scenes special features that explore the story’s journey from bestselling novel to hit show.

When a freak virus kills most of the passengers on an airplane, Ephraim Goodweather (Corey Stoll), head of the Center for Disease Control’s “Canary Team,” is immediately called to the scene. The only way to stop the terrifying disease is to face its source – a sinister supernatural creature whose evil intent seems more powerful than any force on Earth – in this chilling series that also stars Mía Maestro, David Bradley and Sean Astin. 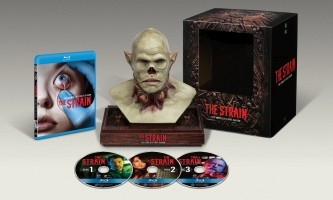