Amazon previewed several new shows at New York Comic Con and here’s a look at Patriot (James Bond crossed with The Office) and the highly anticipated new version of The Tick!

John Tavner (played by Michael Dorman) goes undercover to help prevent Iran from going nuclear. If you enjoy slick stories of spies and espionage, well, this isn’t it. His op doesn’t go smoothly. He sucks at his undercover job. He’s sort of having a breakdown (especially evident when he sings). His cover gets blown and so much more. Yes, this is a very different and very funny look at spy games. 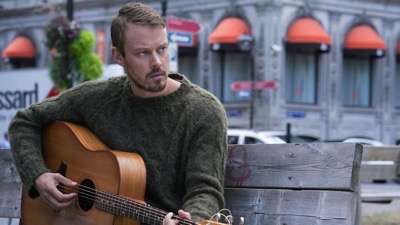 Since the cast (Terry O’Quinn, Kurtwood Smith and Gil Bellows) and crew are currently filming in Europe, they didn’t make it to NYCC. But you can watch the pilot on Amazon for free right now.

Full disclosure: I worked on the show a few times while it filmed in Chicago. I can vouch there are hilarious moments ahead. And, judging by the laughter after a clip was shown at the panel, I’m not the only one! 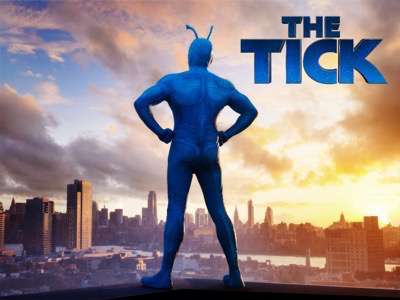 Produced by Ben Edlund, Barry Sonnenfeld and Barry Josephson, the cast includes Peter Serafinowicz (Guardians of the Galaxy, Funny or Die) as the Tick, Griffin Newman as his sidekick Arthur and Jackie Earle Haley as The Terror. 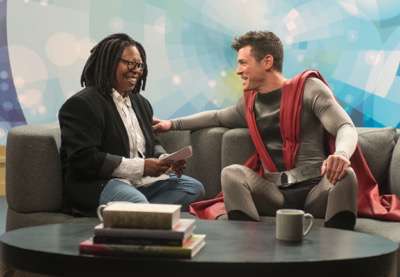 Creator Ben Edlund admits “it was intimidating to show anything like a new expression of The Tick to the fans. For me, the real test was whether the fans would reject it.” Fans got their first look at this new version when The Tick was included in a recent round of Amazon pilots. People view and rate several potential new shows. The Tick was one of the shows that scored high enough to move to series. 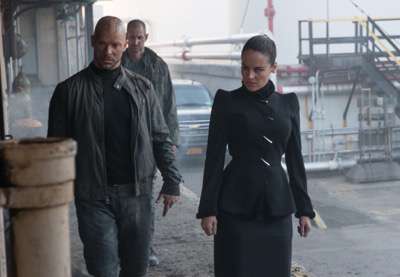 Although there have been quite a few incarnations already, this version of The Tick was quite different than each of the previous versions. Ben discusses how these versions differ:

Each one is of its surroundings. It was a comic book first and it came out making fun of Frank Miller’s Daredevil and it lived in print. Then we had a Saturday morning cartoon and we made it in Korea and used the same tools as Jem. The deviations we made from that culture were really arresting and interesting. The last live-action was maybe more so a product of its time: live-action Flintstones and live-action Dudley Do-Right and stuff. It almost had a punch –drunk effect. That had its own thing.

Look where we are now. We’re in the tsunami of stuff and everyone even passively has been educated to what this is and everyone knows the superhero tropes and basic forms. So it’s a very right time to make fun, but everyone demands an adult-level of dramatic engagement. We’re put into a position of making one of the first hybrids of that kind which is full-engagement of story. But we’re going to be absurd.

Producer Barry Josephson chimes in: “Especially with Peter Serafinowicz as our Tick. He’s absurd and crazy and dangerous and so much fun to watch. You never know exactly what you’re going to get on any day of filming.” 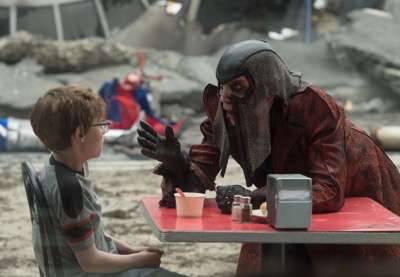 There will be 12 episodes for the season so Ben has mapped out where things will go: “The Terror is definitely going to be an important part of the first season and how Arthur emerges as a hero. We are going to be selecting characters in the upcoming season to give us a place to go. They are going to meet a very, very violent vigilante character who won’t have a skull on his chest but will be quite hardline in his reasoning. We’ll meet a government organization that has fused between a superhero registration and homeland security nightmare. I’m pretty sure there’s going to be some frogmen and I’m hoping to shrink the Tick’s hands to the size of a molecule so there’s a lot going on.”

Barry jokes that fans should “write to Ben and beg him what you want to see.” (I already requested ninjas.) The Tick’s writers room will also include some favorite writers from the Whedonverse like David Fury, Jose Molina. (Ben brought us Jaynestown and puppet Angel).

The series will stream next year on Amazon, but you can watch the pilot now on Amazon.

Did you miss the preview of Amazon’s Sneaky Pete and Lore? Check them out here!