Earlier this year, Syfy launched the ambitious and twisty 12 Monkeys which is about a man who travels back in time to stop a plague from nearly wiping out mankind. Executive producer/showrunner Terry Matalas and stars Aaron Stanford (Cole), Amanda Schull (Cassandra Railly), Kirk Acevedo (Ramse), Emily Hampshire (Jennifer Goines), Barbara Sukowa (Jones) and Todd Stashwick (Deacon) are hard at work on season two, but they stopped by New York Comic Con to talk about the new season.

Have you noticed a programming shift on Syfy? After the network’s glory days of Battlestar Galactica, the programming shifted away from science fiction and focused on lighter paranormal stories with Haven, Being Human, Warehouse 13 and Eureka. While this was meant to broaden their audience, a funny thing happened – supernatural powers became mainstream almost every scripted network had its own genre show. Now, Syfy is mixing in more classic science fiction stories and 12 Monkeys has been the most successful yet. 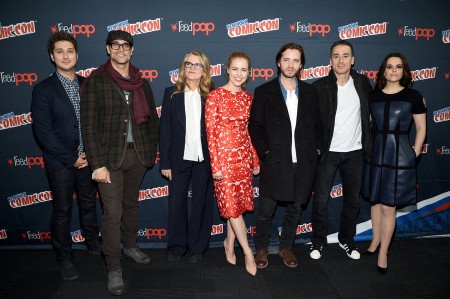 The first season of 12 Monkeys took the smartest and most interesting parts of the Twelve Monkeys movie by Terry Gilliam and made the story its own. While the movie focused on the question of madness and sanity, the show is more about destiny and fate.”

“We are the only species that is aware of time,” posits showrunner Terry Matalas. “Maybe it’s aware of us. Maybe one depends on the other in the same way. We’ve implied that time is cruel. We’ve implied that it seems to have its own sort of way. We saw the scratch disappear from [Cassie’s] watch, so time definitely wants certain things to happen. So the question is, is time on our side and if that’s the case, how does mankind and time work together?” 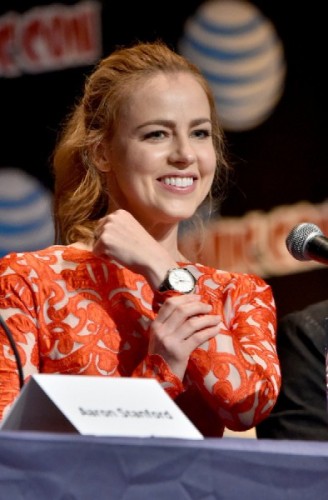 “I think Cassie, in particular,” says Amanda Schull, “has a very contemptuous relationship with time. But she also learns how to play it. She learns how to use time in her favor, although it takes a few tries before she understands how she can manipulate time. And when you see episode 208, you’ll know exactly what I’m talking about.”

Season two will further explore time in ways that will challenge Jones. According to Barbara Sukowa: ”There are such interesting concepts of time, and time interacting with humans that is what will blow your mind…[Jones] is confronting more personal issues as much as issues regarding the plague. Time travel gets more important. Personal issues come up really strongly for her and she really has to go to the bottom of why she’s doing this mission.”

If that wasn’t cryptic enough, Emily Hampshire teases “Jennifer’s relationship with time is a very intimate one. That’s all I’m saying.” 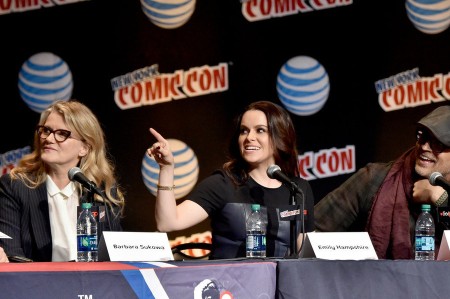 At the end of season one, time separated Cassie and Cole with a neat WTF? reversal which turns the show on its head for the start of season two. Aaron Stanford talks about this impacton the characters: “She’s in the future and he is in her time. They’ve both switched places in other ways as well. She goes to the future and she gets a glimpse of Cole’s world: the apocalypse. She sees how bad it can be and how low humanity can sink and it changes her. And Cole, having known her and having been at her time, gets a different view of people than he ever had before.” 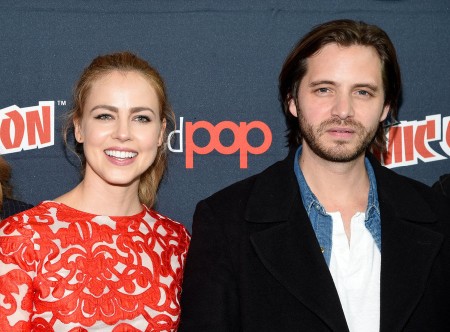 According to Todd Stashwick, Cassie will also have an impact on Deacon since “she brings out a different side of him. He’s going to help her survive. His relationship to Jones is different. It evolves. It wasn’t anything in the beginning.”

Barbara believes that Deacon’s relationship with Jones “was a necessary evil and it’s like an arranged marriage. They have to deal with each other and sometimes something quite good and interesting reveals itself.”

And speaking of difficult relationships, Kirk says that Cole and Ramse continue to have issues since “their two different directions are just going to pull from the other…We’re both a little burnt, but the friendship, the bond is so strong that you let things slide.” 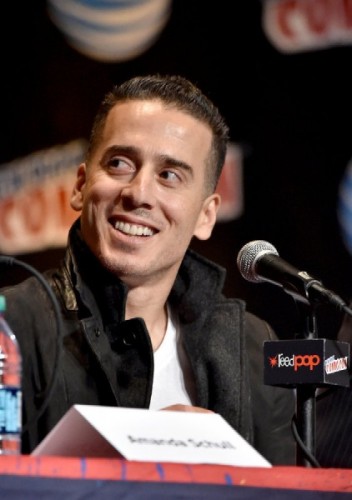 Season two will do more than explore the relationships with these characters. “We’re going to the 1940s, the 1950s, 1960s, the 70s, we go to places in the future you never thought you’d see. We go to the future’s future. The conspiracy is much larger and we really get to learn about what the Army of the 12 Monkeys really is and what they want,” Terry explains.

“The plague was just the beginning of what their problems were. In many ways, this is a small part of what the Army of the 12 Monkeys are really trying to do,” states Todd.

“Clearly, the Army of the 12 Monkeys has some apocalyptic vision of a red forest. What we do know is that the distortion of time makes this foliage red and fucked up. So what is the larger plan? Why do they keeping talking about this red forest? Is the plague only part of the plan? I think one of the trailers shows Jones saying that the very fabric of our existence is unraveling and that’s a hint towards what they want.” 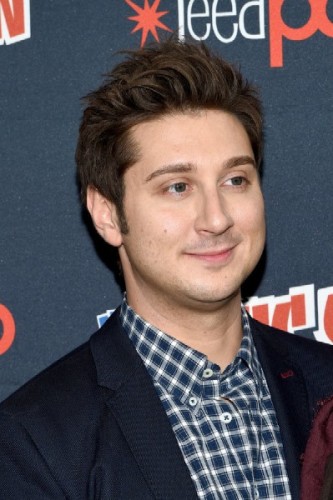 Terry explains why Emily was promoted up to series regular this season: “Last season, we kind of hinted that Jennifer kind of knew things she shouldn’t have known. She kind of knew who people were. She would say things like ‘Green to red’ which we knew was happening. Jennifer’s a really important character this season. It seems like she’s connected to the changes in time in some way and maybe that’s part of where her craziness comes from. She’s fun to write. She’s going to make you cry this season.”

Emily hints that we’ll be seeing more sides of Jennifer including a “sane Jennifer. I can’t say how that’s going to happen or why. But it’s enough to say that you will see a totally different side of her. And also this season I play Old Jennifer [from 2043] a lot more.” 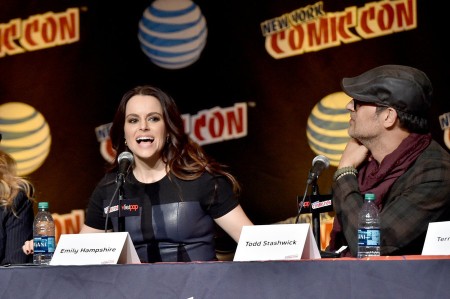 Terry also promises that we’ll learn who the Witness is this season, but the cast is mum on other mysteries being revealed. Aaron will neither confirm nor deny the theory that Cole is the infected corpse. “Do I know? I might have an idea about that I can’t tell you people about these things.” 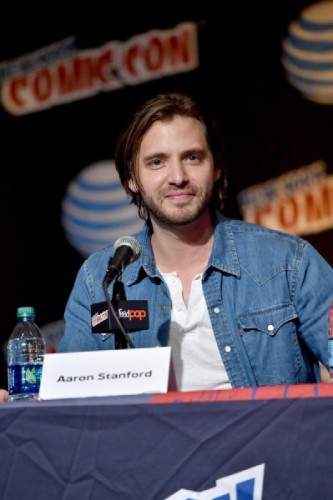 Kirk meanwhile, dodged the theory about Ramse’ son being the Pallid Man with “I was tweeting that last year…I think it rolled into something else, but you never know in Terry’s mind.”

In Terry’s mind, they are also on track with their original two-season outline for the show with “some adjustments just because a better idea comes along, but the direction is absolutely the same. We knew where we were going at the end of the season. And in order to actually tell the season finale of season two, we had to go break out what season three was. So it’s just something you have to do or else you get caught with your pants down like ‘We made it up, we don’t know!’ We just don’t want to do that.”