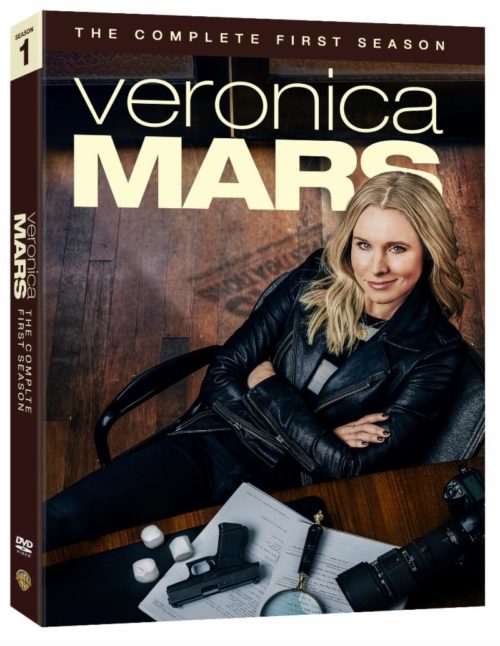 Coming to Blu-rayTM via Warner Archive Collection
BURBANK, CA (July 31, 2019) –Hey Marshmallows…The wait is over! Television’s favorite super-sleuth is back, and on a mission to save Neptune! Discover more secrets, snooping, and seduction like you have never seen before as Warner Bros. Home Entertainment releases Veronica Mars (2019): The Complete First Season on DVD October 22, 2019. Veronica Mars (2019): The Complete First Season contains all 8 edge-of-your-seat episodes from the first season along with exhilarating extra content including the Veronica Mars at Comic Con 2019 bonus feature! The DVD is priced to own at $24.98 SRP ($30.99 in Canada). Veronica Mars (2019): The Complete First Season will also be available to own on Digital via purchase from digital retailers (available on August 19th in the U.S.).
Veronica Mars (2019): The Complete First Season will be available on Blu-rayTM courtesy of Warner Archive Collection. The Blu-rayTM release includes all bonus features on the DVD and is also arriving October 22, 2019. Warner Archive Blu-ray releases are found at wb.com/warnerarchive and your favorite online retailer.
Spring breakers are getting murdered in Neptune, thereby decimating the seaside town’s lifeblood tourist industry. After Mars Investigations is hired by the parents of one of the victims to find their son’s killer, Veronica (Kristen Bell) is drawn into an epic eight-episode mystery that pits the enclave’s wealthy elites, who would rather put an end to the month-long bacchanalia, against a working class that relies on the cash influx that comes with being the West Coast’s answer to Daytona Beach.
“You don’t need to be a superfan to get hooked on this new series,” said Rosemary Markson, WBHE Senior Vice President, Television Marketing. “Both fans and newcomers of the critically-acclaimed series alike will be in for a treat as they relive their favorite episodes from the first season, along with the Veronica Mars at Comic Con 2019 extra feature for a deeper investigation behind the scenes.”
Veronica Mars (2019) is executive produced by Rob Thomas (Veronica Mars, 2004; Veronica Mars, 2014 feature film; iZOMBIE), Diane Ruggiero-Wright (iZOMBIE, Veronica Mars, The Ex List), Dan Etheridge (Veronica Mars, Party Down), and Kristen Bell (Veronica Mars, The Good Place, Bad Moms) and stars Kristen Bell, Enrico Colantoni (Veronica Mars, Person of Interest), and Jason Dohring (Veronica Mars, Ringer).
SPECIAL FEATURES
8 ONE-HOUR EPISODES
DIGITAL
The first season of Veronica Mars will be available to own on Digital on August 19 (in the U.S.). Digital allows consumers to instantly stream and download all episodes to watch anywhere and anytime on their favorite devices. Digital is available from various retailers including Apple TV, Amazon Video, Google Play, Vudu, PlayStation, Xbox and others.
BASICS
Digital Release: August 19, 2019 (in U.S.)
DVD Release: October 22, 2019
DVD Order Due Date: September 17, 2019
DVD Presented in 16×9 widescreen format
Running Time: Feature: Approx. 456 min
Enhanced Content: Approx.30 min
UNITED STATES
DVD
Price: $24.98 SRP
2 DVD-9s
Audio – English (5.1)
Subtitles – English
CANADA
DVD
Price: $30.99 SRP
2 DVD-9s
Audio – English (5.1)
Subtitles – English
About Warner Bros. Home Entertainment Inc.
Warner Bros. Home Entertainment (WBHE) brings together Warner Bros. Entertainment’s home video, digital distribution and interactive entertainment businesses in order to maximize current and next-generation distribution scenarios. An industry leader since its inception, WBHE oversees the global distribution of content through packaged goods (Blu-ray Disc™ and DVD) and digital media in the form of electronic sell-through and video-on-demand via cable, satellite, online and mobile channels, and is a significant developer and publisher for console and online video game titles worldwide. WBHE distributes its product through third party retail partners and licensees.
Share on Facebook