Ok, for a second I thought I was watching “The Revenant” all over again. Not going to make this mistake again…burr! *Grabs Blanket* We see our favorite Lothbrok boy out on his own fighting the bitter cold. Bjorn arrives at the cabin in the middle of a blizzard. He goes ice fishing and is off to a good start on his solo venture. 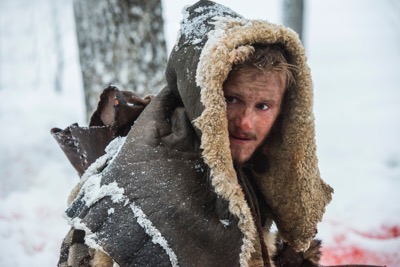 Floki escapes his shackles in the dead of night. The whole village starts searching for him. For a man who has been tied up in the freezing weather, Floki fled through the mountains quite nimbly. He is followed by a fleet of Vikings accompanied by none other than the young Lothbrok boys themselves. Ubbe is particularly observant of his surrounding and keeps a keen eye on his horizon.

Meanwhile, Helga remains in Kattegat with her little daughter. Ragnar approaches her inquiring about Floki sudden escape, but she refuses to give a straight answer. Helga is surprised by Ragnar’s reaction; “I don’t blame you. It is your duty, as a wife.” Besides Helga, Ragnar might be the only one who truly loves Floki. His heart to heart with Helga seems to be his way of assuring her of her and her daughter’s safety amidst the current situation. Ragnar leaves provisions behind for the coming winter. 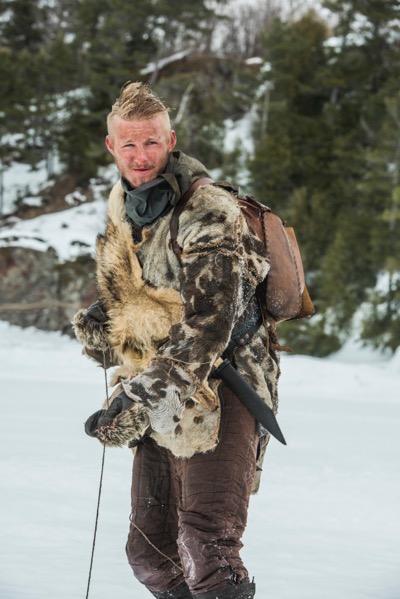 The search continues as young Ubbe leads the men. Floki’s stride doesn’t miss a beat as he tries to gain ground between him and the search party. Nonetheless, he stops to grab a snack, but quickly hides realizing that the hounds have caught up to him. Floki fails to dodge Ubbe’s sharp sight; he gets dragged back to Kattegat to face his awaiting punishment. I have to confess. I really wanted Floki to get away. Sure he may come across as an insane lunatic, but there’s a reason behind his madness. Floki truly believes in the word of God.

Ragnar struggles to deal with Floki. He feels for his family and sincerely cares for Floki. Instead of executing him, Ragnar decides to make him suffer for all the pain he has caused him. The drift between Ragnar and Aslaug haven’t healed ever since her indiscretion with Harbard. Already frustrated with Floki, the last thing Ragnar wanted to hear was Floki’s actions being justified by Aslaug. He snaps leaving Aslaug on the floor with throbbing cheeks. 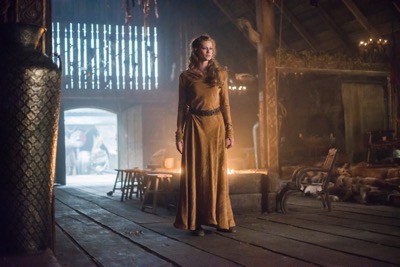 Back in Wessex, King Ecbert is dealing with his own crisis. Apparently, Queen Kwenthrith has been overthrown by several nobles rebelling against King Ecbert’s influence in Mercia. Lead by Aethelwulf, King Ecbert convinces his own nobles to send out troops to save Queen Kwenthrith and regain their rule over Mercia. They realize the magnitude of the situation as soon as their “puzzled” scouts arrive at the gates.

In his son’s absence, King Ecbert plays Judith’s fairy godfather and set her free. He grants Judith her one wish; the desire to be a painter like our late Athelstan. To Judith’s surprise, King Ecbert honors his promise by hiring a teacher. The monk has a hard time digesting the King’s request to let a woman near sacred text, but a quick talk with the Bishop seals the deal. He abides having no more excuses not to teach Judith. 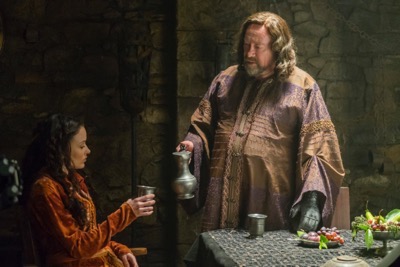 After sitting through the most awkward wedding of the century, how can we forget about our new French Duke, Rollo? He devises a plan to prevent future Viking boats from entering their waters. Rollo shares his ideas with Count Odo and Roland, who can now carry out the construction of the suggested forts. You can’t help but giggle when you see our berserker being ever so gentle with the tiny models while he plays out potential scenarios. My giggles soon turned into deafening laughter as soon as I saw Rollo getting a French makeover. Is it me, or does he remind you of Lord Farquaad from “Shrek”. Sadly, we weren’t the only ones entertained by the “new and improved” Rollo. Princess Gisla straight up laughs as his face. Poor Rollo; he is trying so hard to fit in, but keeps getting ridiculed instead.

We got a glimpse of Count Odo’s leathery fetishes last season. He continues his discrete relationship with Theresa. What we didn’t witness is that Roland is actually using his wife Theresa as a double agent to gather Intel in order to discredit Count Odo. Of course Roland wants to be the Emperor’s new right-hand man. 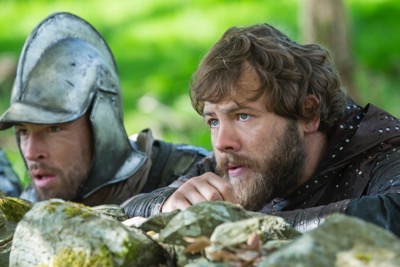 All the way up in a tower, Queen Kwenthrith and her son is held hostage in Mercia. Aethelwulf attacks the fortress with his troops. The Mercian soldiers are over powered, and as soon as they began to lose control, a Mercian soldier was sent to kill the queen; however, Aethelwulf manages to intervene. After his nerves prevented him from opening the door, the soldier yells out the command; “Kill the Queen!” Equipped with knitting needles and a wooden stool, Queen Kwenthrith does considerable amount of damage to stay alive. Wow, did not think she had it in her. As we all know, her specialty is poison; a coward’s choice. Maybe it’s the “Momma Bear” power within her to protect her cub. She continues to take down two of her guards while Aethelwulf makes the excruciating journey up the tower. He storms right in time to take down the last guard. Queen Kwenthrith was more than grateful; “What took you so long?” I guess that’s one way of thanking the person who just saved your life.

We end this week with a few disheartening images. Ragnar finds Helga digging a grave in the middle of the winter storm for her infant daughter. He immediately thinks of Floki, who is currently serving his sentence. He has already hit rock bottom, and we could only imagine what this news will do to him in his fragile state. Not to ignore what Helga is going through, but she is clearly more stable and stronger than we all expected. She has endured so much, and this might be the final blow to tip her over. Even though Ragnar was forced to take action against Floki, he is constantly there to support his family. 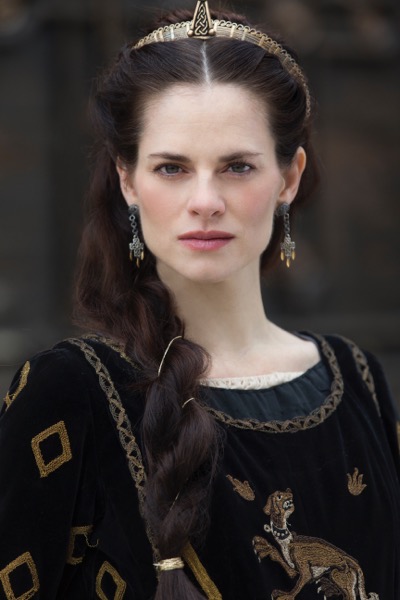 Meanwhile, Floki is tied up in a cave under constant dripping water; the ultimate punishment to make him suffer. This particular punishment takes me back to one of the stories Aslaug shared with her sons during a previous season. Please correct me if I’m wrong. I just remember the story, but I’m not certain who mentioned it; the story about Loki getting bound by the Gods with venom dripping on his face. Ice water might not be the same, but I’m sure it serves the intended torture quite closely; poetic justice.

I don’t expect anything less than pure mind blowing insanity each episode. I could hardly wait for the next episode. Our emotional rollercoaster is already in motion. What will happen to Floki? Will Helga still remain beside her husband? Wish it was under better circumstances, but I love that we are getting to see more of Helga. When will Bjorn return? How did I survive an entire episode without Lagertha? The countdown begins for episode three.