God bless Walt Disney and Pixar! I mean seriously they always do a pretty stellar job of setting up a red carpet. While I was away jaunting place to place with Scotty and Erica today, CB was taking in the sights at the Walt Disney/Pixar world premiere of Cars 2!

CB is a car nut; I mean I don’t understand how many times Fast and Furious needs to be brought up in everyday conversation. I mean it can be, “The sky is blue today!” And CB will say, “Yes, just like the hue in Vin Diesel’s car from Fast and Furious!” Sigh… Anyway, so it’s no surprise he wanted to check out the Cars 2 premiere!

NANANANANANA, CB, CB, CB! Today I am very psyched because it’s the day of the CARS 2 Premiere!! WOO. I’m a big fan of Pixar movies in general, but CARS is one of my favorites. I asked Mike if he wanted to come and he said, “Owen Wilson can’t act.”

(Editor’s Note: I did not say that! Sigh… I said Paul Walker can’t act… And I’m correct!)

(CB Note: Wedding Crashers was hilarious!) Mike doesn’t like Owen Wilson, but I DO!

I wanted to go for Owen before, but missed out. I’ve never got the guy, but I didn’t want to carry around a lot of stuff, so I just took my cars one sheet poster with me. Michael Caine is a voice in the movie and I wanted to continue my Dark Knight poster and brought that poster with me too. Other than those two items, I really had nothing else with me. Let’s wish for the best.

3:00: I arrive and see the strangest set up EVER! I have no clue where to stand because the street is closed and double barricaded. 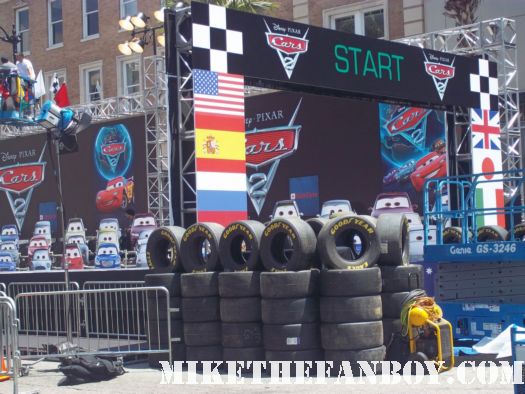 3:20: I go around and take pictures of the display pieces. Disney usually spends a lot of money at premieres, and today was no exception. The whole street was made to look like a race track. 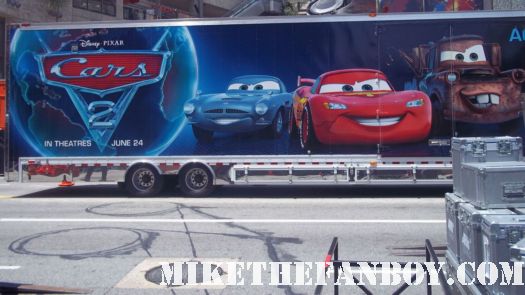 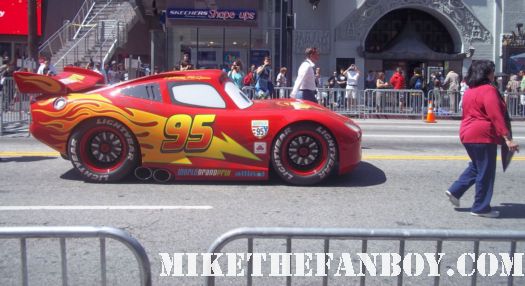 Disney built remote control replicas of the vehicles from the film and they look awesome. 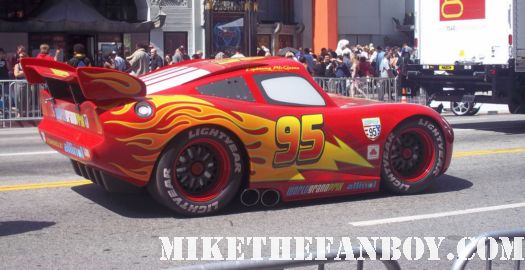 6:30: Arrivals have started, but there is a BIG PROBLEM, they are not dropping them off on the street, they are taking them directly to the carpet. So I can’t see anyone arrive. CRACKERS!

6:45 I head over to the front of the theater and wish for luck, because nothing was happening where I was. 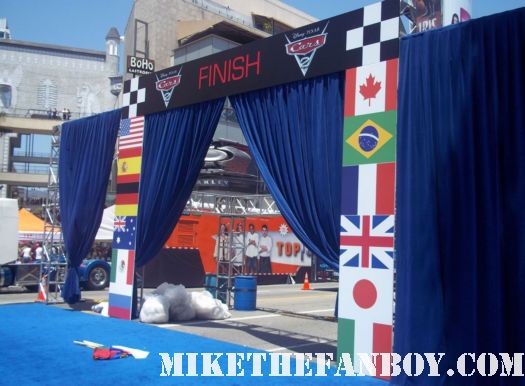 What I hate about waiting here is I have to wait for the cast to finish doing all the press, which can take up to an hour. 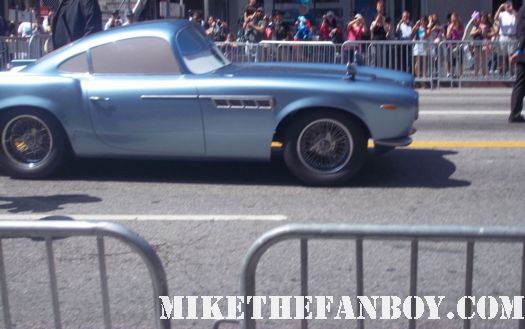 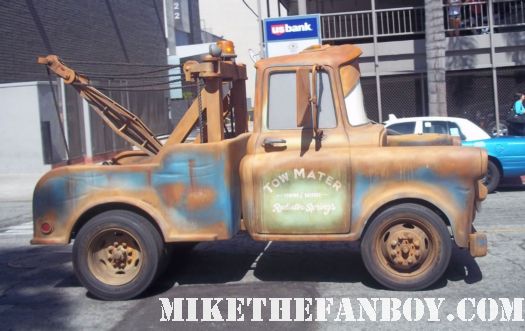 6:50: I see Guy Fieri from Food Network. We chant for him and he comes over. I don’t have anything, but he was a nice guy signing autographs. 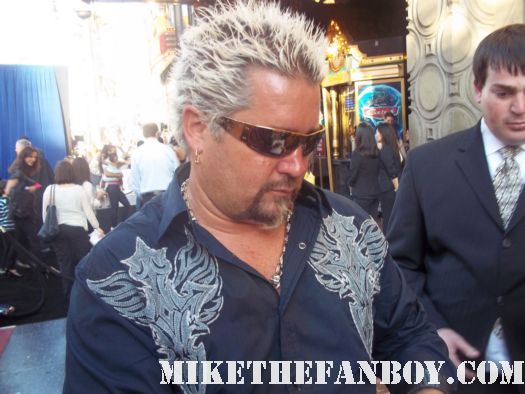 6:53: It’s Sig Hansen from Deadliest Catch. He signs for the other side of the theater and makes his way to our side. I get him on my poster and he heads inside the theater afterwards. 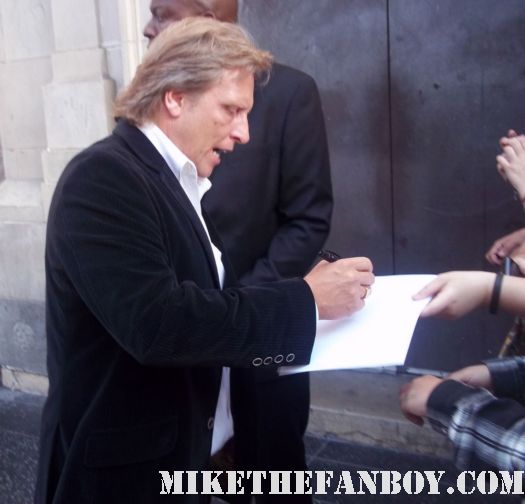 6:55: Nicole Scherzinger walks into the theater and we call for her and she comes over. I don’t have anything, so I take a photo with her. She’s really sweet. 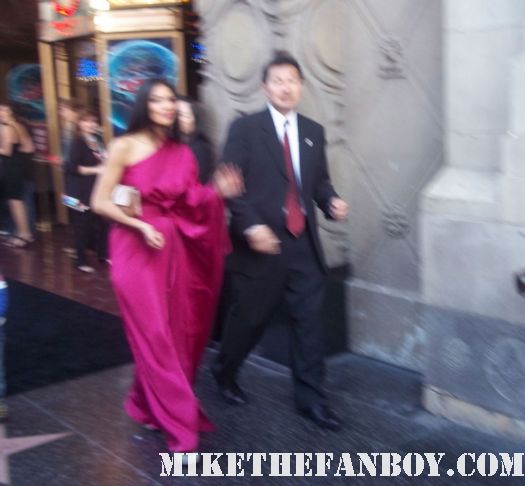 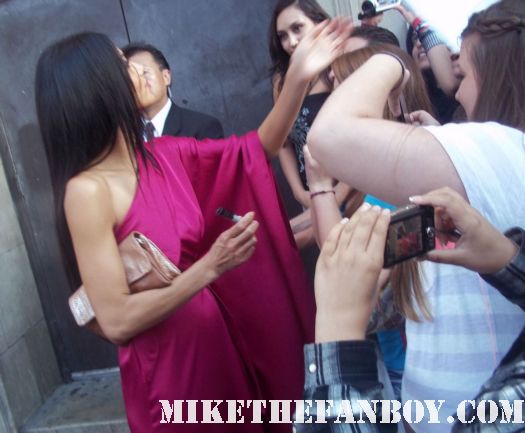 6:57: Emily Mortimer signs autographs on the other side…that is until someone hits her with a poster and she throws the pen down and heads inside.

7:00: I see Owen Wilson finishing up and he signs on the other side…crackers…

7:10: He finishes signing and we chant for him, and HE COMES OVER TO US! WOOO! I get him on my poster. What cracked me up is nothing; I MEAN NOBODY had anything for him to sign. He just stood there and smiled and took photos. The other side was yelling shoving photos in his face and we were peaceful. (CB Note: By the time I took a photo, he had left and gone inside)

After Owen signed my poster, I left. I didn’t want to deal with all the dealers after the movie ended. I’m really happy I got Owen on my poster, so YAY! Until Next time, Same CB hour, same CB channel, same CB Blog, KAAAAPPPPPOOOOWWW! 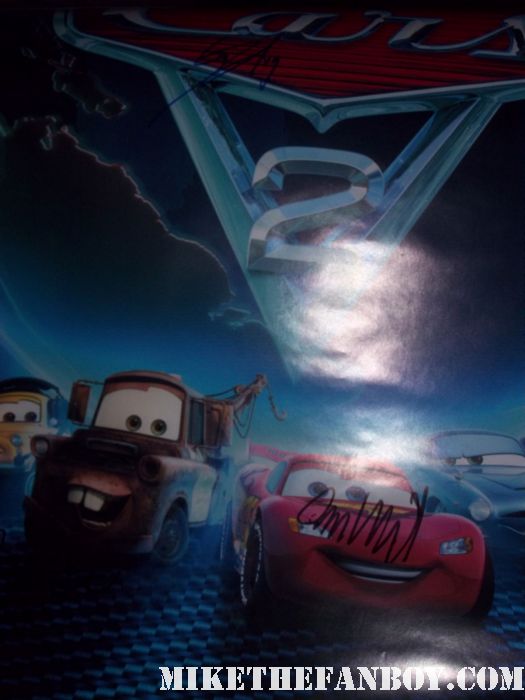