I have to tell you, there are some awesome people out there and one of them is Willem Dafoe! I have seen him out and about a couple times and each time, he was super awesome.

Big Mike, headed out to meet the Spider-Man star and as usual he was so nice!

Hey, fellow “graphites”! See what I did there? Called us autograph lovers/collectors (not dealers!) “graphites”. Original, huh? You’re welcome. Closing out my previous week was an endeavor to get famed actor Willem Dafoe. I had missed a couple of his performances with Mikhail Baryshnikov at UCLA over the weekend due to not having a clue they were even there in the first place. No worries! I had the one shot I actually knew aboot. He would be doing a Q & A in Hollywood and I decided the morning of that I would try and get him a couple of items I had lying around my collection.

Before he was the Green Goblin in 2002’s Spider-Man, he was very popular for his role in Platoon back in 1986. For the rest of the 80s you could basically find him in any flick that took place in a jungle. I decided to bring a few DVD slips and a Green Goblin figure. I do love getting the figures signed. I don’t normally bring so many items, but it’s nice to have back-ups in case the celebs don’t like signing certain works of theirs. If the goblin figure wasn’t cool I also had the first Spider-Man DVD along with the ever popular and awesome Boondock Saints and To Live & Die in LA. I had seen in a friend’s post that morning that he had gotten five signatures on Saturday night and I felt somewhat comfortable trying to get my items signed by Mr. Dafoe the night after. I should’ve brought some blanks with me to print a still from Saints where he yells “There was a firefiiiiight!!!” Stupid hindsight. (Look up the cat meme, it’s hilarious.) There were only a few collectors at the theater when I arrived and then the guessing game began. “Will he go in the front or back?” “Is it a talk or are they showing a movie?” “Will he switch pens if he signs?” Ah, the life of an autograph collector. Such poignant questions we ask during the time we’re wasting.

The event was to start at 7:30pm and we had three groups staked out at different spots to notify the others if Dafoe was spotted either going in the front or the sneaky ol’ back. This might involve running. Fear. The line to get inside all but disappeared and it was just eight of us and a few people in the stand-by line. We found out that Wes Anderson’s The Grand Budapest Hotel would be playing so that meant we would be waiting for a bit more. After we were relayed the news at the box office I spotted what I thought was Dafoe. Could it be? I was the closest to him and had a great shot and getting my figure signed! I pulled my Green Goblin out of my bag, and then my figure (insert rim-shot), and grabbed my DVD slips and started walking towards him. A few of the other graphites hurried over until we all realized we duped ourselves. Okay, I started it, but this dude in his 50s looked just like Willem. Stupid imposter. Prolly books birthday parties as Spider-Man’s nemesis, or bachelor parties at VFWs or something. I call him a “Dafoe-ny”. Get it? Too bad, I’m not going back and deleting it. Anyhoo, that was not a mistake I make very often. I humbly put my stuff away and went back to the corner with my head down. The group I was with were all folks I was familiar with. A couple of the guys had gotten Dafoe on Friday night and said that he had “racked” that evening and that Willem was a cool dude. That raised hopes. It’s always nice when bigger stars haven’t let things get to their head and aren’t afraid to sign away to their fans. That’s getting more and more rare these days.

A little further into the evening Mr. Dafoe pulled up to the theater in his own car. There was no spot to park so he moved to the end of the block and parked just across the street. Our group was down to six and we motioned the others watching the back entrance and we calmly lined up at the corner waiting for Dafoe and his guest to pass by. Willem politely told us that he had to go inside and check in, but he would sign for us later. Now, a lot of celebs are known for saying that and then duck away giving us fans a sort of phantom “fuck you”. Edward “Hollywood Douchebag” Norton and Jason Bateman are the most recent to come to mind. This time is was a nice feeling of hope. I’m not really used to that, but I had every reason to have it this time. Sure enough, about fifteen minutes later Dafoe came outside and walked right over to us and we all lined up. 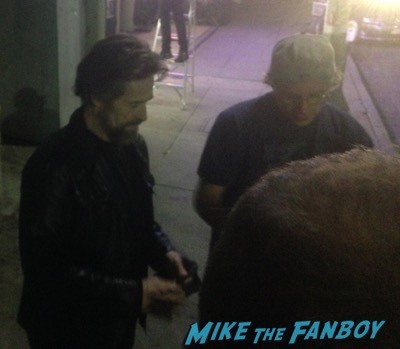 He went back and forth between us switching pens back and forth. I felt kind of weird when he’d sign one item and give me my blue Deco Color paint pen back only to have me show him another item a minute later and have to give the pen back before he’d turn away. 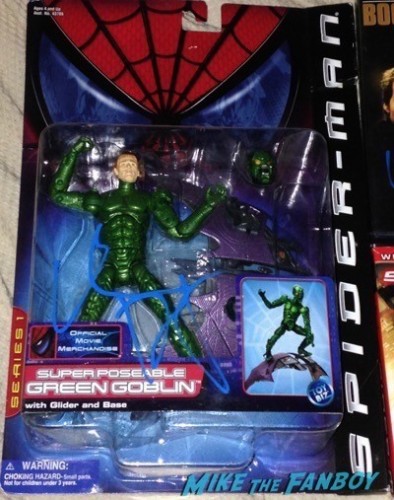 I asked him if there were any plans for another sequel to the Boondock Saints movies and he told me he didn’t know because he’d never kept up to date on things. That sounds aboot right in this town. The dude couldn’t have been more nice and chill. He signed all four of my items and would’ve signed more for us. 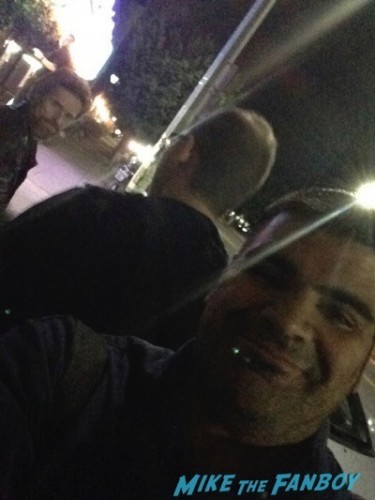 I almost wish I had brought my Spider-Man posters. I have the original teaser with the Twin Towers on it along with Stan Lee’s autograph and didn’t know if I should just leave it alone. Another dude had the same poster signed by Stan Lee also and now it also has Dafoe. At least I know what it could’ve looked like. Stupid hindsight. 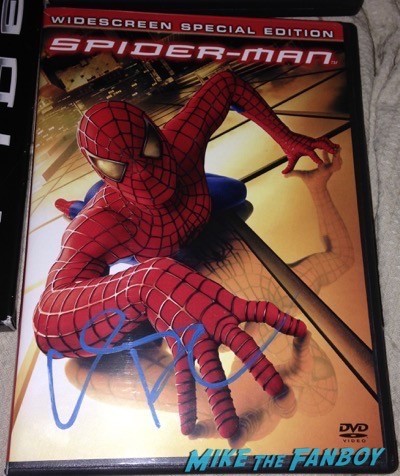 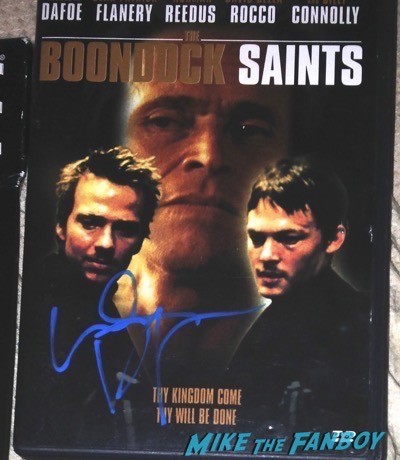 Remember to always say “Please” and “Thank you” when autographing even if the celeb isn’t in a pleasant mood. Respect their space and have everything ready to go. Oh, and never let the publicists and handlers see you flicking them off even though they prolly deserve it. Okay, have fun out there. 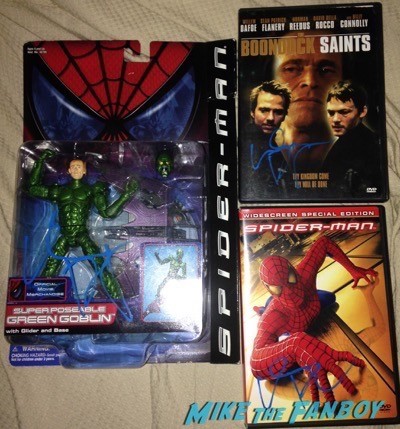