I love organized signings, I know, I know, they are frustrating because most of the time you have to buy whatever product someone is promoting, whether it’s a book, a cd, etc… But at least generally speaking you get a nice autograph and you can meet people who are not out and about very often.

One such person is William Shatner. Yep, Captain Kirk, live and in the flesh! MTF Reader Paul was on the scene and as William Shatner observed even dressed for the occasion!

Amoeba in Hollywood announced William Shatner was doing an album signing in store on the 8th! I spent the entire week obsessing over the event even rambling on about Shatner at both Julianne Moore events I attended. The weird thing is I planned on being a red shirt for Halloween and bought my uniform a month prior, phaser and all! (thanks David from star world)

Ok, so the morning of the 8th I get to Amoeba and wait with 4 people before the store opens and manage to obtain a cd and record for about $50 (reasonable) I love how the records are violet and orange the album is prog rock (yes, genesis, hawkwind, etc…) before I know it it’s 3:00pm and I am determined to get a good place in line since I’m in costume and now I have my 77 year old grandmother with me (she just moved to Los Angeles 2 weeks prior from Arizona) we ran into the same people in line that I was hanging out with earlier so the 2 hour wait flew by.

No time at all and we were right at the Bill’s (Billy Sherwood & Bill Shatner) the security guard then announced several times “no cameras no cameras” he confused my tricorder with a camera I responded with “why would I have that primitive technology with me” which made Billy Sherwood laugh. 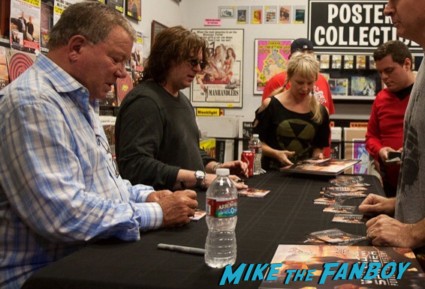 Then I was eye to eye with James Tiberius Kirk himself he then took a long look at me and said “I see you dressed up for the occasion” my reply “”of course I’m surprised more people didn’t!”

He then proceeded to promote the upcoming live shows he is dong and chatted with my grandmother about various things ( I was kinda shell shocked to pay attention) then security/staff scurried us along. 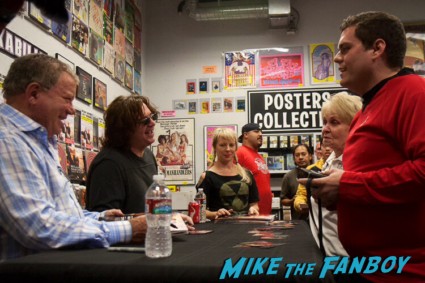 Later that night I discovered Amoeba took some halfway decent photos of us.