‘Insidious 3’ could be more terrifying than the previous two chapters according to some of the people involved with the project. I can’t answer to that, but I can say the clips they revealed at WonderCon scared the bejesus out of me! During WonderCon I was able to sit down with the cast. They talked about making Chapter 3 and some of the challenges.

In Chapter 3 we meet the Brenner’s – Sean (Dermot Mulroney), and his daughter Quinn (Stefani Scott). Recently Sean’s wife, Quinn’s mother, died from cancer, which has thrown the family into a tailspin of dysfunction. Quinn decides to try and speak to her mom from beyond the grave…and I think we can all guess where this is going. Hayley Kiyoko plays Quinn’s best friend Maggie while Leigh Whannel (who also directed the film) and Angus Sampson reprise their roles as Specs and Tucker. But
for me, the real ‘star’ of the piece is Lin Shaye reprising her role as Elise Rainier.

You see, ‘Insidious 3’ is a sort of origin story for Elise Rainier and we get to learn what led her to the events in Chapters 1 and 2 of the franchise.

Dermot Mulroney and Stefani Scott were excited to be joining the franchise and doing their first horror film. Although Mulroney joked that he’s been in some horrifyingly bad movies. The attraction to the story for both seemed to be the aspect of family that is prevalent. I asked them both if it was the differences between this family vs. the Lamberts that might give this film its darker edge. Stefani Scott believes it’s the familiarity for the audience that makes it so frightening: “What makes this so terrifying is how relatable it is with first going through the horror of losing a wife and mother and then this entity terrorizing them…it makes it more horrifying because you can relate deep down.” Mulroney seemed to agree: “It’s like a super family drama hidden in a horror movie.”

During the course of the film Quinn suffers broken legs, arms, and is wheelchair bound. This isn’t a haunting as it is a brutalization of a poor girl and everyone seemed impressed with Stefani’s bravery and fearlessness in playing such a demanding role.

Hayley Kiyoko – who stars in ‘Jem and the Holograms’ alongside Stefani – said that getting to do this project with one of her best friends was great and that she liked the darker drama of this film vs. ‘Jem’. She thought the story was great and was excited to bring another chapter to the fans. She also joked about how spooky the set could be. “It was scary just to be on set and I’d hear a creak and I’d freak. One day I’m having lunch and this ‘thing’ is eating salad (the actor in costume for Man Who Can’t Breathe).”

During the interviews a lot of the talk was around why make a prequel? According to Leigh Whannell they wanted to know more about Elise, but since she’s a ghost by the second Chapter, the only way to explore her character further was to go back and do a sort of “origin” story. Once they settled on that idea Leigh was excited because it essentially gave them a clean slate to work with since they didn’t have to answer to anything that happened in Chapters 1 and 2.

I asked Lin Shaye if she changed her approach to the character since this was a prequel. The actress said she’d always had a backstory for Elise since the first film, but this time she really had the opportunity to explore who Elise was. “To watch this character unfold was really a treasure for me. In all my work I try to find the arc, but this gave me that arc to [flower and bloom] the character.” She even went as far
as working with wardrobe on Elise’s look for this film, especially when Quinn meets her for the first time. “I took it further than Leigh even wrote.”

Leigh stated that Lin’s always had a personal connection with Elise – evidently Lin has her own ghost stories – and at times it blurs the line between the actress and the character.

Angus Sampson, returning to his role of Tucker, said it was interesting to explore the relationship of Tucker and Specs when they’re first collaborating together. “Specs and Tucker at this stage don’t have their repartee/banter going on yet. Elise brings them closer together and you witness that. It’s not so much their origin story as it’s how they come [together] as family through Elise. It’s leading up to Chapter 1, with some little nods and easter eggs for fans of the franchise.”

From what I’ve seen and they way the cast seemed to be gushing love over the project I think fans of the ‘Insidious’ frachise will be in for a real treat. 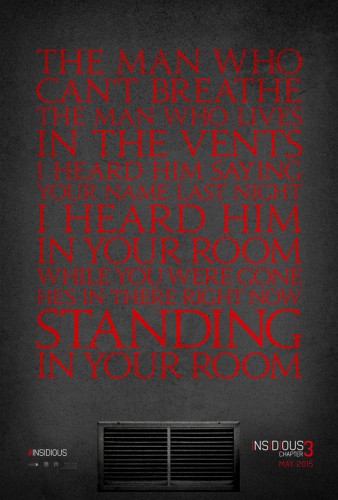