I do love awards season! Sigh… Honestly, as this point it’s the reason I have my SAG Card still… Lol… Anyway, even though I’m feeling a tad under the weather I really wanted to make it out to one of the final cast q and a’s of this awards season. It’s with the cast of The Help, at least most of the cast of The Help. Tonight Viola Davis, Emma Stone, Octavia Spencer, Jessica Chastain, and director Tate Taylor.

Scotty has been working on a The Help piece and I have this The Help mini poster I wanted to start. These screenings are really good usually… Because everyone in the audience is a voting member of SAG.. Well… You get the idea.

We arrived at around 5:40 p.m. and… Oh wait, I ARRIVED at 5:45 p.m. Scotty… He’s late, lol… In fact I had to ask the lady at the front if Scotty could come in late. I’m just teasing Scotty… Honestly, half of me was like, “Oh Scotty’s late, I can go home and sleep!” lol… and he had to deal with my coughing all night… But anyway, I really love The Help, and who wants to carry a poster around for another three years when the majority of the cast is here.

This screening was far from sold out… In fact even as the film started there were about 30 empty seats. Since the movie is out on DVD and every SAG member was sent one of the DVD’s I suppose people just wanted to stay home on a Saturday night.

Scotty did arrive and all was well. We took our seats in the front and watched The Help… Again… This was my third time, Scotty’s second time. You know, every time I see it, I enjoy it. This time I honestly was struck at how awesome Jessica Chastain is in the film. I know Octavia Spencer was getting a lot of the early acclaim with Viola Davis, but Jessica was equally amazing! 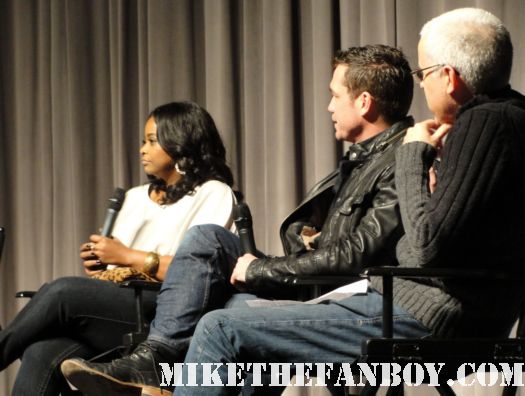 I don’t know which movie of 2011 I would pick as “best picture” but The Help is on the shortlist. 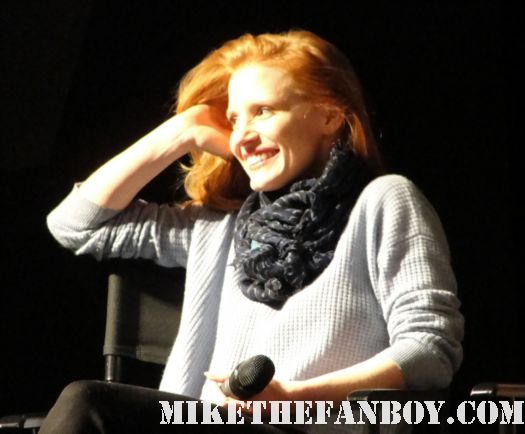 The Q and A was also very good, although you can tell the cast had been doing these Q and A’s for quite some time for different voting guilds. 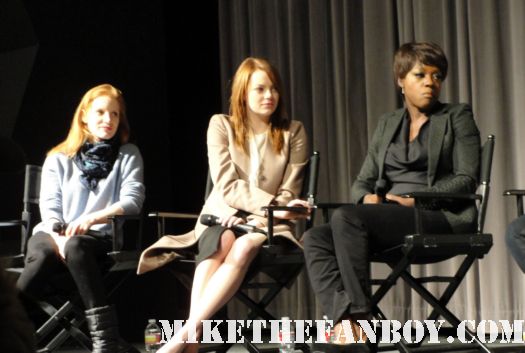 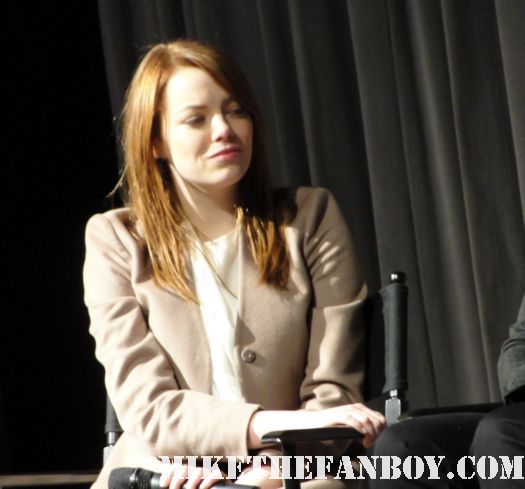 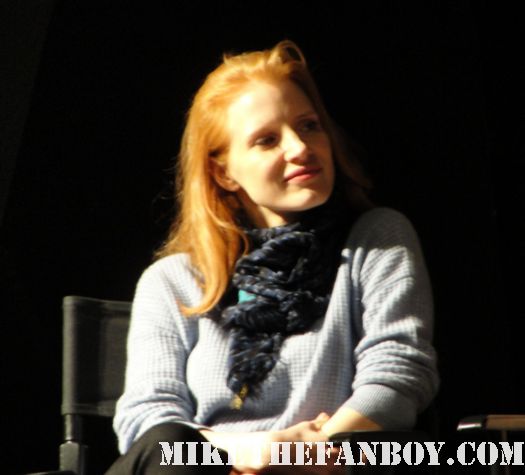 Each of the actors were very cute. I have to tell you, Emma Stone is simply adorable! She’s my new crush. 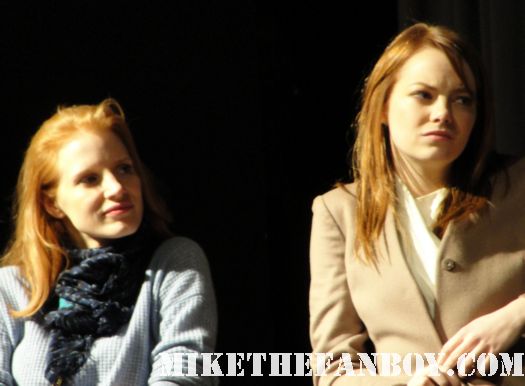 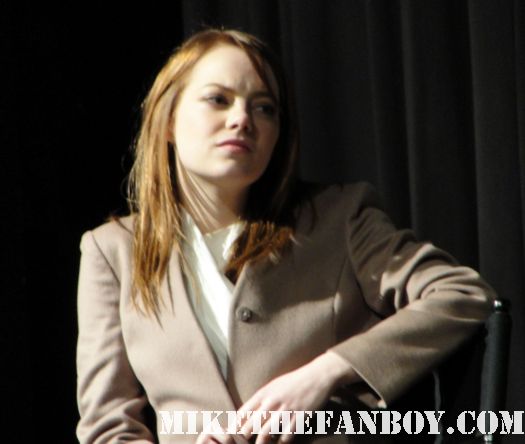 Take a look at some of the clips from the Q and A below.

Things get really interesting after the Q and A. Now, people generally walk up to the stage to get photos and autographs, it’s normal and rather expected at these screenings.

After the screening people didn’t just approach the stage they jumped on top of it. I mean suddenly you have a quarter of the audience jump on stage! It was insane! I’ve never seen anything like it at one of those screenings! The actors were totally taken aback, and I think they were freaked out.

Octavia Spencer threw up her arms and ran off stage. The rest of the cast hung around. Scotty actually was lucky enough to get a photo with Emma Stone, I went for Viola Davis because I think that she will be the hardest one to get eventually. Viola was taking photos and I got her to sign my poster. There were about 25 people on the stage.

Director Tate Taylor took off as well… I so with I had video of it all!

Emma Stone stayed and took photos and hung out for a little bit. I got her on my poster, but I tried for a photo and she was done. It was too confusing an too many people were on stage. 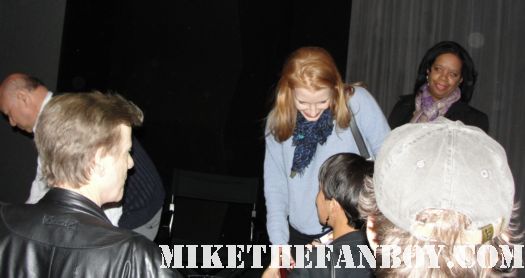 Jessica Chastain was super nice. She just sat on the edge of the stage and signed, and took photos. At one point she was like, “Does anyone have a black sharpie?” lol, I was like sure! She signed a bag or something for a young girl, and then my poster.

Security was like, Do you want to leave? Jessica said, “I’m alright now…” The operative word is “NOW.” Man, It could have been so simple.

Jessica was nice enough to take a photo with Scotty and I and I thanked her. 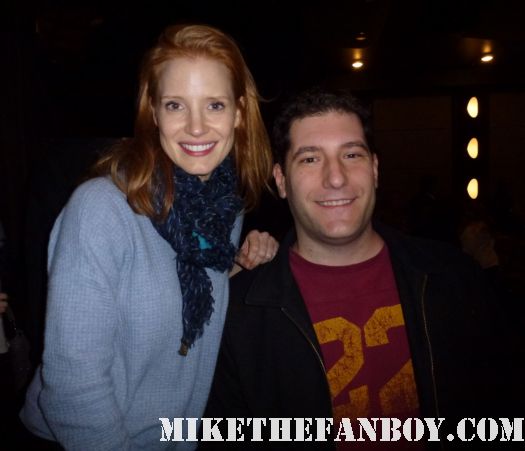 By this point my theraflu was wearing off, and I started feeling horrible again… Ugh… So, it was time to head out.

It was a nice night, and since I haven’t been out of the house in a couple days, it went moderately smooth. Bummer I didn’t get Tate Taylor or Octavia Spencer but I’ll get it finished eventually! 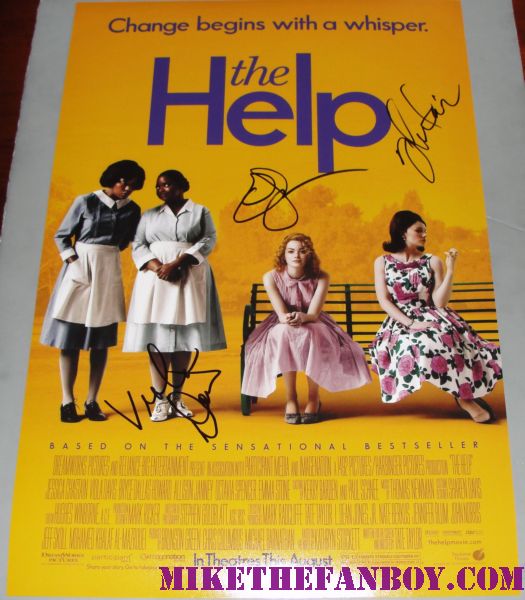