I love me some Walking Dead. It’s one of the best shows to ever hit the airwaves. I’m talking in history. I can’t think of another show that literally kills of the main characters and you really don’t know who will go next. It’s frustrating but awesome.

I didn’t make it out to this one but Billy Beer was hot on the scene to check it out. Take a look at his full report after the jump!

Welcome back to Billy Beer’s Barstool! Today we got a big one for you. We are off to the Walking Dead screener, where a number of the living cast members are going to be attending. I was at the Season premiere a few months back, and let me just say this is one of the nicest casts. They were great with their fans and we’re not just talking about the smaller cast members. The overflow of niceness was led by two of the main actors Andrew Lincoln and Norman Reedus. Taking pictures with everyone and signing everything in front of them. I’m hoping for the same thing this time around. And away we go!

When I get there, C.B. and John were already there, along with of few other people. I’m there early enough though that I should be in the front row. I hold our spot while C.B. goes to his car. Next thing I know I’m getting a call to run over across the street. Tim Allen is talking with someone outside. Not quite how I expect to start the day, but I go running. We waited a couple of minutes and when he was done talking I tell him I’m a fellow Michigander and ask for a picture. Which he does with slight hesitation. I don’t ask for the graph, cause I already felt we were kind of bugging him. But again, he was nice enough to do it (Unlike Chris Pine a few weeks ago for two of us) 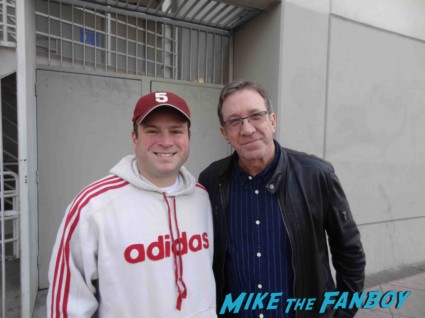 Now back to the line. After waiting a little longer, and listening to people bitch about spots, they finally move us to the barricade. By “barricade”, I mean the yellow caution tape they wrapped around a couple of trees and bushes. Oh this is going to be good. For the most part, the people who were showing up were dealers. I was by a few of the good ones, but it’s the people that reach over that kill me. I’m an easy target cause I’m not GIANT size like Mike the Fanboy.

(Editor’s Note: Giant Size? Thanks Billy, that made my evening… grrrrr… M-) 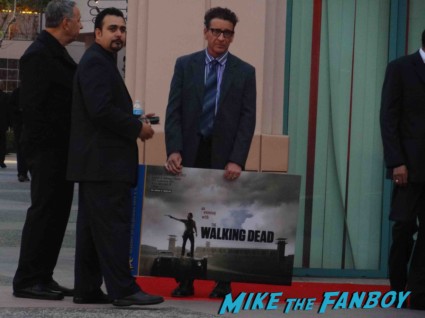 Time to see who’s really going to be here. One of my favorite tricks. Find the guys holding the guest sheet, and zoom. Only problem is all the lights pointing different ways is messing with my camera and focus. This ends up being a problem for the whole night. So sorry in advance for the crappy pictures! 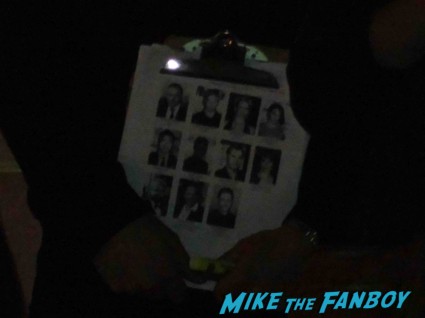 By the time things get started, it’s about 3 people deep. We finally have our first arrival, Greg Nicotero, Executive Producer/Special Effect Make-Up Designer. I don’t have anything for him, but that doesn’t stop everyone from jumping on my back to try and get him. UGH! It’s going to be a long night. 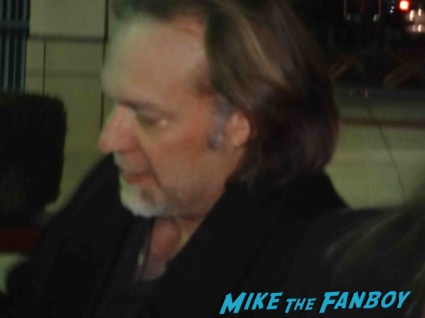 The first cast member to arrive is Danai Gurira. She’s hesitant at first, but then decides to come over. They’ve three different things to do before they go in. There’s an interview spot, red carpet pictures, and press. They all look like they want her, but she comes to the fans first. 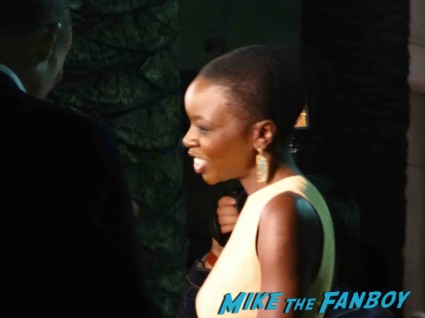 For most of the people I brought individual shots, and then if they signed more, I had a small 8 x 10 Walking Dead post for them too. I only got 1 Danai. 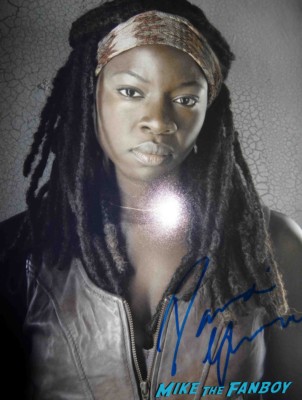 Next up was Robert Kirkman. He was nice and went down the whole line. 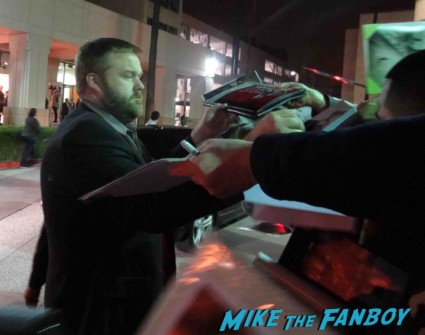 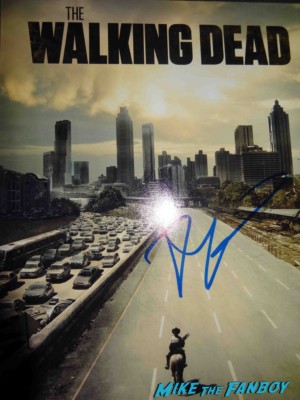 Laurie Holden arrived next. I guess the crowd was starting to get bad. Security was starting to tell the people if they kept acting crazy, they were going to tell the actors not to come over. And I actually think they started doing that. Laurie stood there for a while, talking to people trying to figure out what to do. Finally she goes over and gets interviewed. We not to happy about this, and then Lauren Cohan arrives and does they same thing. I’m almost positive they’re telling them not to come over. This just turned into SUCK!

After we start cheering for Lauren to come over, all of a sudden we see Andrew and Norman together walking up. Now there was a chorus of three names being yelled. It looks like they are talking to Norman, but he’s having nothing of it. This guy loves his fans!!! He comes running over as if he was playing red rover right through the security guards and starts signing. The crowd is getting crazy, but he doesn’t care. He does everything he can to get a pen mark on everyones pictures. (some of them actually looks like just a pen mark) People are stepping onto the street cause people are pushing Luckily no one has fallen down. Otherwise, this fanpit would be getting shut down. I’m able to get everything I had for Norman done. Now it’s time for Andrew to cross. 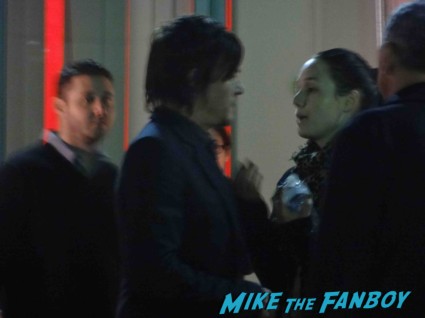 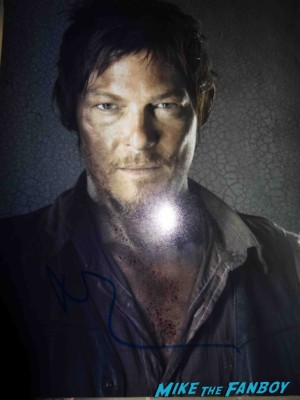 Andrew doesn’t disappoint either. Where as Norman was flying through the line, Andrew took a little more time, but was still signing everything you put in front of him. 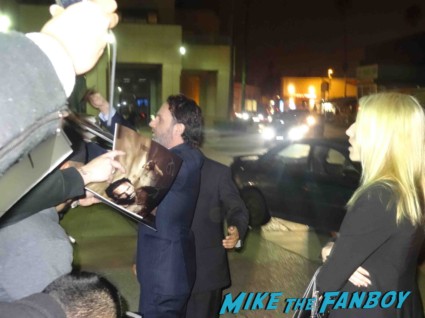 I love it when the big stars still love their fans. I know they’ve been hounded now for a couple of years, and you see some people burn out (Bradley Cooper, as of late) But these guys are rockin it out with smiles on their faces. Reminds me of the SOA cast. 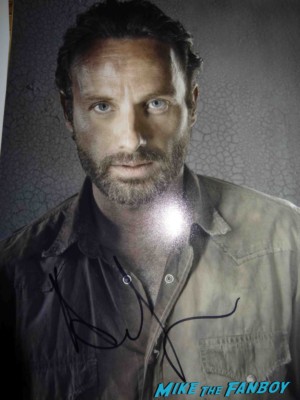 We finally see Steven Yeun. He’s one of the harder ones of the cast to get. I actually missed him at the Premiere cause he didn’t go all the way down. I still needed him on my cast piece. He starts a little to my left, and then moves a little bit away from me. OH NO! NOT AGAIN!!! 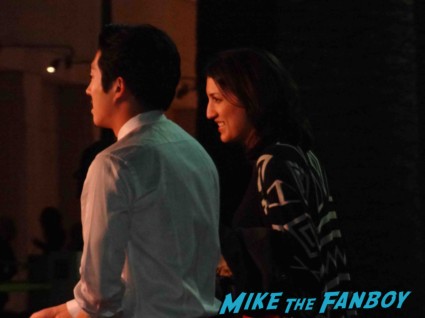 Luckily, he switches back towards me, and I finally get him (granted he signed over someone else on my picture) . He doesn’t stay long, and then goes but to be interviewed. 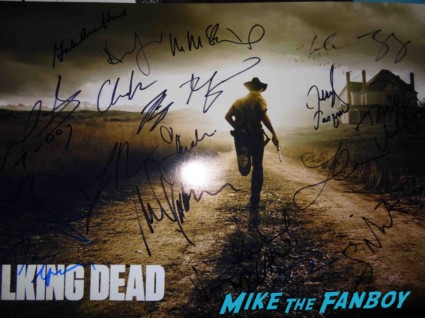 Someone then spots Gale Anne Hurd. After some convincing, she made her way over and signed a few, which I was lucky enough to get one. 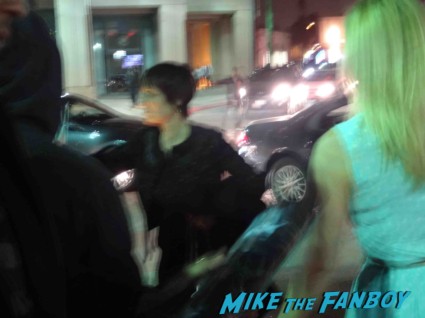 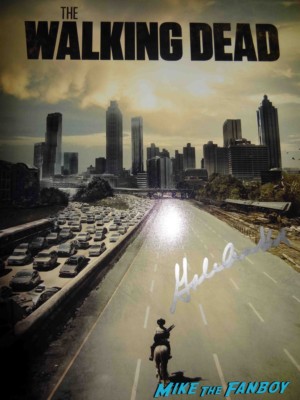 After she was done with everything, Laurie Holden finally makes her way over too. It was well worth the wait. She started all the way down on one side and finished on the other end. 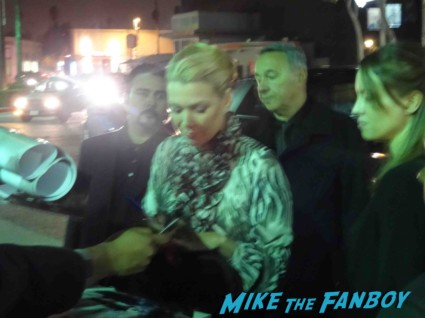 She’s actually the only person to take pictures with people too. Not that you could have gotten a good picture with anyone else with all the boards in people’s faces! 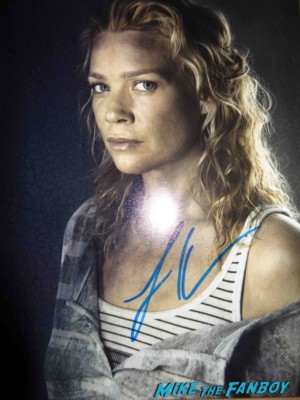 And that was it! Wow!!!! I totally expected to have to stay for the exits, but I got most of what I could get done, done. I decide to see if I can get anyone at the exits for the Safe Haven Premiere.

IT SUCKS!!!! Nobody is leaving in public view. The only thing exciting for me is getting a picture with Russell Simmons and Estella Warren (you go Russell!!) I think Russell agreed to the photo cause I was wearing ADIDAS. 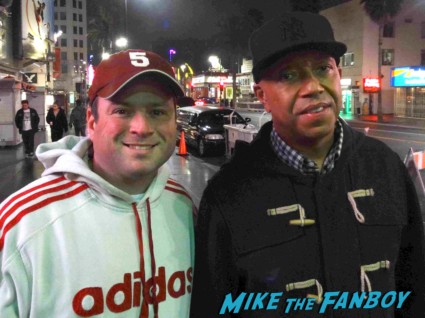 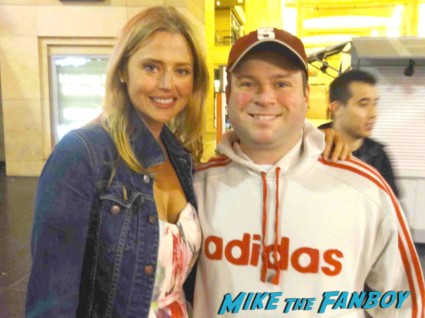 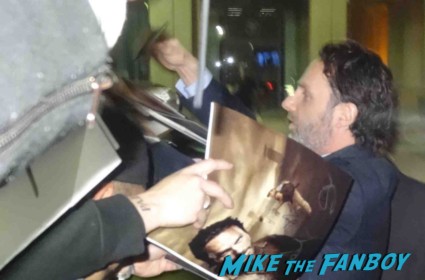