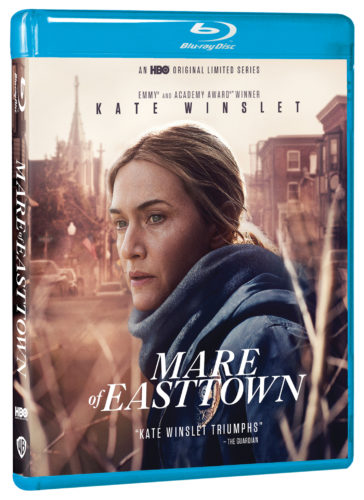 Twitter Pitch: Oscar® and Emmy® winner Kate Winslet shines in HBO’s suspenseful mystery drama #MAREOFEASTTOWN: AN HBO ORIGINAL LIMITED SERIES. Don’t miss your chance to own a copy of the captivating series on DVD 9/14 from @WBHomeEnt.

HBO’s gripping drama, Mare of Easttown: An HBO Original Limited Series, will be released on DVD on September 14, 2021 by Warner Bros. Home Entertainment. Starring Academy Award®, Emmy® and Golden Globe® winner Kate Winslet (HBO’s Mildred Pierce) and from creator and writer Brad Ingelsby (The Way Back), with all episodes directed by Craig Zobel (HBO’s The Leftovers and Westworld), the seven-part limited series is focused on family and community. The DVD includes all seven episodes plus four behind-the-scenes featurettes and is priced to own at $24.98 SRP ($29.98 in Canada). Mare of Easttown: An HBO Original Limited Series is available now to stream on HBO Max and to own on Digital via purchase from digital retailers.

Mare of Easttown: An HBO Original Limited Series will also be available on Blu-ray courtesy of Warner Archive Collection. The Blu-ray release includes all bonus features on the DVD and is also arriving September 14, 2021. Warner Archive Blu-ray releases are found at wb.com/warnerarchive and your favorite online retailer.

Both a critical and ratings hit, Mare of Easttown is one of only two series in HBO’s history to enjoy week over week growth culminating in a finale episode that was watched by nearly 3 million viewers, setting a record as the most watched episode of an Original Series on HBO Max during it’s first 24 hours of availability.

Ingelsby returned to his home state of Pennsylvania to write the series, an exploration into the dark side of a close community and an authentic examination of how family and past tragedies can define our present. Winslet stars as Mare Sheehan, a respected small-town Pennsylvania detective investigating a local murder while also balancing her own personal life, which is rapidly falling apart around her.

Mare of Easttown is now available to own on Digital. Digital allows consumers to instantly stream and download all episodes to watch anywhere and anytime on their favorite devices. Digital is available from various retailers including Apple TV, Amazon Video, Google Play, Vudu, PlayStation, Xbox and others.