Home / Fanboying! / Lewis Will Be Back After He Meets Arnold Schwarzenegger! Plus Rita Ora! Ray Winstone! Jennifer Connelly! And More!

You can’t even say those words without thinking of a certain Terminator star. I’m talking about Arnold Schwarzenegger! MTF Reader Lewis who did a great recap with Bruce Springsteen a little while back, had a chance meeting with Arnold Schwarzenegger even though he went out to meet Russell Crowe.

Check out the full recap from Lewis below!

It was an early start for me as I had to catch an early train into London Sunday evening ready for the Monday premiere of Noah. I got to leciester Square for about 5:30am and there were half a dozen people who had camped out over night.

I missed Russell at the Man of Steel premiere so really only came to meet him but a photo with hard man Ray Winstone would be a real treat.

At about 8am I got word that Rita Ora would be making an appearance at about 9:30am to promote her new single. Her organizers were handing out little photos for her to sign on arrival. Whilst I was waiting I got a glimpse of a bearded man walk past Capital Radio, I followed him and realized it was non other than Doctor Octopus himself Alfred Molina. He kindly signed and allowed a quick photo with before getting on with his business. I knew today would be a good day.

Rita Ora soon walked up, there were no barriers, it was pretty badly organized however she was extremely fan friendly and signed and had photos with at least 150 waiting fans. 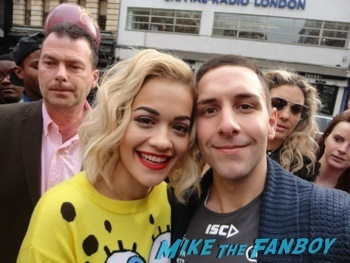 At about 10:30am I noticed people were still waiting around Capital Radio. I asked who they were waiting for and they replied..”if I were to say Hasta la vista baby…”

I knew Arnie was in London as he attended the Empire Awards the day before however I really didn’t believe it. I had a photo of Arnie with me just in case I somehow ran into him, so I waited with everyone else. As we were waiting Ray bloody Winstone comes out. I asked him for a photo, his PA ,as they all do, said no but he very graciously obliged. 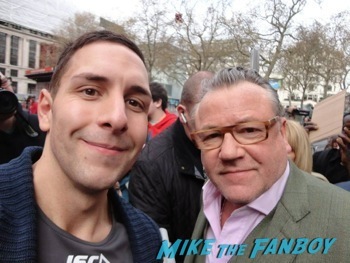 I decided to walk round to the back of the building and saw a silver Mercedes parked up. Low and behold in the passenger seat was the Oak himself Arnold Schwarzenegger waiting to be driven into the underground car park. He waved then drove in.

I’ve met Arnie before at his book signing in London and got a peach of a graph from him as I was first in line. However at book signings I never really feel satisfied with the meet as its pretty much guaranteed rather than luck.

I waited at the exit for about 15mins with about 10 other people and about 8 dealers. Arnie’s car started to leave, he smiled and waved but didn’t stop to sign. 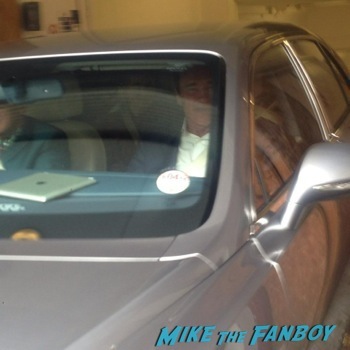 The dealers started to chase his car. I have seen videos of Arnie roll down his window and sign so I decided to join in the chase. We stopped at about 3 traffic lights through busy London traffic until he rolled down his window. He signed one for a dealer then off he went again. At the end of the street his car turned left onto a straight road, there were 4 of us left chasing his car. One by one people dropped off due to fatigue until it was just me. I must of chased that car for a good 10 mins. As I got to a traffic light and up to his window before I could catch a breath the lights changed and he was off. I could see him smiling in his window as I ran behind. It was like a scene from Terminator 2. The car turned into a small road and thank god there was a traffic light, no traffic and buildings either side. I got up to his window and said “Arnold I’m f**ked, I don’t think I can do much more”, he smiled and put his window down. I handed him my Expendables 2 photo and pen and he signed, I was so out of breath I didn’t think to ask him to personalize it with ‘I’m back’ however it was such a treat being one on one with Arnie as well as beating all the dealers! 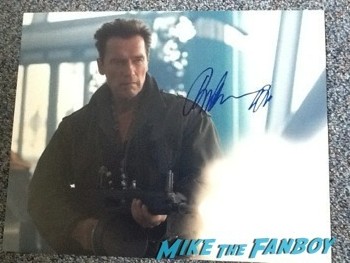 I couldn’t care less who I met at the premiere now I was happy. I managed to get Jennifer Connelly and Emma Watson however missed Russell again but went home with the biggest smile on my face. 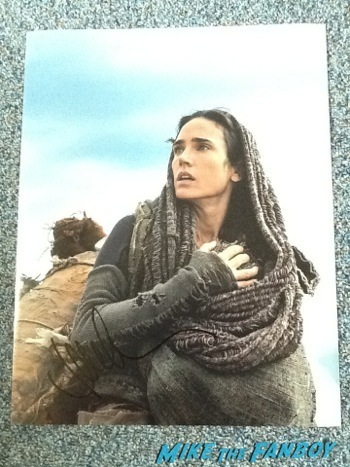